Airlines in the region continue to plan for growth in 2019, albeit at a slower rate than forecasts earlier this year, with nearly every carrier across Latin America planning to add to their fleets. Collectively, the publicly-listed carriers expect roughly 79 new aircraft, though in many cases they will replace older models.

The bulk of those 79 deliveries are already dedicated to the sale-and-leaseback (SLB) market, with lessors continuing to offer "great" terms as Azul head of aircraft programmes Priscilla Branco put it at the ISTAT Latin America Forum in Lima on 15 November. However, an increasing number will be financed with Japanese operating lease with call option (JOLCO) structures with more planned for 2020.

"They're incredibly cost efficient for the airlines who can access that market," said Thomas Hollahan, global head of aviation at Citi, on JOLCOs at the forum. "It's really hard to compare any other financing course to 100% financing."

He adds that, for airlines that can tap the Japanese market, it is really hard for other products to compete. 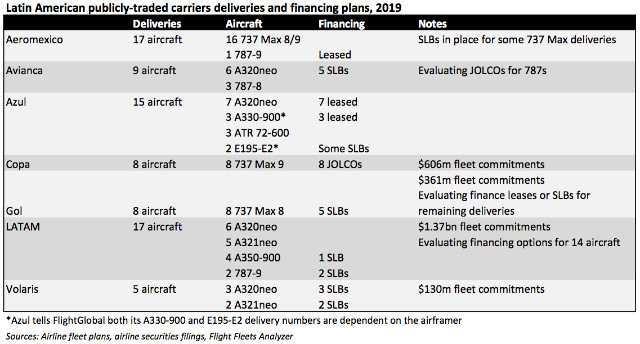 Copa Airlines will finance its eight Boeing 737 Max 9s due in 2019 with JOLCOs, while Avianca is evaluating the market for some of its deliveries, and Azul and Volaris are eyeing it for 2020.

"They've been great for us," said Jose Montero, chief financial officer of Copa, on the product in October. "They've allowed us to get great capital."

There is "a lot of depth" among Japanese investors for JOLCOs, where the Panama City-based carrier is able to get "very competitive rates" in addition to the 100% financing, he says.

Hollahan, who has pitched capital markets solutions to Copa, says that while they could command a rate of around Libor plus one on an enhanced equipment trust certificate (EETC) transaction, the upfront costs the airline would face make the option uncompetitive compared to JOLCOs.

Copa is not alone tapping Japanese investors for funds. Aeromexico has financed five Boeing 787s with JOLCOs, including one delivered this year, and Avianca has financed four aircraft, including a 787-8 that it took in September.

The Mexico City-based carrier may reduce its fleet commitments for next year, following a third quarter that its chief executive Andres Conesa described in October as "one of the most challenging" since 2008. As a result, Aeromexico accelerated plans to retire five aircraft – three Embraer 170s and two 737-800s – with plans to remove them by year-end.

Avianca plans to take delivery of nine aircraft – six Airbus A320neos and three 787-8s – in 2019, an October investor presentation shows. Five of the A320neos will be financed under a SLB with SMBC Aviation Capital, while it is in the "planning" process for the remaining aircraft, its chief executive Roberto Held told FlightGlobal in October.

JOLCOs are "a good and efficient way" to finance aircraft, he said when asked if it planned to tap the market for any of its 2019 deliveries. It is evaluating the structure along with other options.

Azul and Volaris are two carriers that may soon tap the Japanese market. The former will finance the majority of its at least 15 deliveries next year – seven A320neos, three Airbus A330-900s, three ATR 72-600s and at least two Embraer 195-E2s – with lessors.

The Viracopos, Brazil-based carrier is leasing the A320neos and A330s directly, and has agreed to SLBs for some of its E195-E2s deliveries, says Branco. It has previously financed ATR 72s with SLBs.

"There are a lot of interesting opportunities with JOLCOs, EETCs and private placement," she says. "The next batch of aircraft we have to finance, we're definitely going to look into more debt-related transactions."

Volaris has SLB funding in place for its three A320neo and two Airbus A321neo deliveries in 2019, its fleet planning senior manager Juan Manuel Rosas Diaz told FlightGlobal at the forum.

"I see by 2020 looking at something, [the] JOLCO product probably," he says. The Japanese market is the most attractive among the three options the Mexico City-based carrier is considering, the others being more SLBs or finance leases, adds Rosas.

Gol and LATAM Airlines Group, two of the region's biggest carriers, have not disclosed any imminent plans to tap the Japanese market. In August, Gol chief financial officer Richard Lark told FlightGlobal that it had SLB financing in place for all but three of its 737-8s due in 2019. Asked its plans for those remaining aircraft, he said the leasing market – both finance leases and SLBs – was available at better rates and terms than other options.

"We're a single-B rated foreign issuer out of Brazil," said Lark. "If you look at the IRR [internal rate of return] or cost of capital, a commercial deal or EETC is 200 or 300 basis points more expensive to us today." 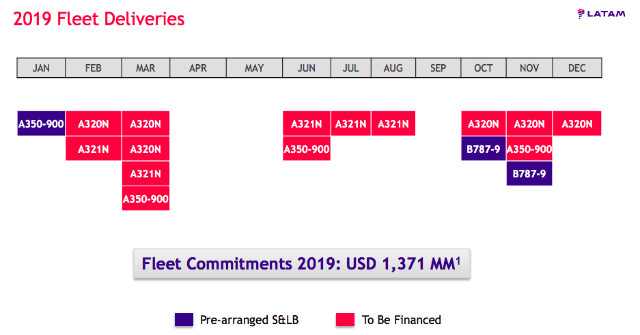 The Santiago-based carrier has tapped a variety of sources for aircraft funds, including commercial bank debt, export credit agencies, EETCs and JOLCOs previously. In 2018, it financed the majority of its deliveries with SLBs.

JOLCO financing has been on an upswing in Latin America for a few years now and, barring a shock to the market, looks to continue its rise. However, lessors retain a strong presence in the region – something ISTAT attendees expect to continue despite the increased availability of other products.