ANALYSIS: Are US airlines at their next scope crossroads?

US airlines have had limits on the number and size of regional jets in their feeder fleets almost since the day Comair introduced the Bombardier CRJ100 in June 1993.

Scope clauses at American Airlines, Delta Air Lines and United Airlines focus on those larger jets. All three have caps on the number of large regional aircraft allowed in their feeder fleets, as well as limits on the number of seats at 76 – with a few grandfathered exceptions – and maximum take-off weight (MTOW) at 39.01t (86,000lb).

These limits have been set since 2012, when pilots at Delta ratified a contract increasing the number of 76-seat jets in exchange for the addition of the 110-seat Boeing 717-200 to its mainline fleet. American and United followed suit with similar agreements with their pilots that, while not adding a small mainline aircraft, allowed for more large regional jets as at Delta.

US airlines may be at its next scope crossroads. United and the Air Line Pilots Association (ALPA) could begin negotiations as soon as May on a contract to replace the one that becomes amendable on 31 January 2019.

The negotiations will be closely watched from all corners. Contracts at American and Delta become amendable on 1 January 2020 and 31 December 2019, respectively, with any changes achieved by United likely to be sought.

Airframers are keen on any number of changes, from allowing additional aircraft to changes in seat count and weight. Both Embraer's E-Jet-E2 and Mitsubishi's MRJ families exceed the 76-seat and 39.01t MTOW limits under current contracts, something that effectively bars next generation aircraft from US regional fleets.

“We believe the MTOW limitations could be relieved to some extent, or the airlines and the passengers cannot enjoy the next generation aircraft,” Masao Yamagami, then Mitsubishi Aircraft America chairman and chief executive told FlightGlobal in 2015.

"Our growth really does need more 76-seaters," said Scott Kirby, president of the Chicago-based carrier, at a financial conference on 14 March.

Kirby and United chief financial officer Andrew Levy say the airline needs the additional regional lift to remain competitive against American and Delta, and to meet its ambitious capacity growth plans of 4-6% annually through 2020.

"If we're trying to fly a 50-seat product into Rochester, Minnesota… and our competitors are flying a nice 76 [seat] two-class product, we're going to lose that battle," says Kirby.

United's scope clause limits it to 255 regional jets with 70- to 76-seats, a number that it hit by the end of 2017. It can add up to 70 more large regional jets if it adds a new small mainline aircraft, specifically the Bombardier CSeries or Embraer E-Jet, at a ratio of one additional regional aircraft for every 1.25 mainline aircraft.

United had 256 small regional jets and 255 large models in its feeder fleet at the end of 2017, its fleet plan shows. 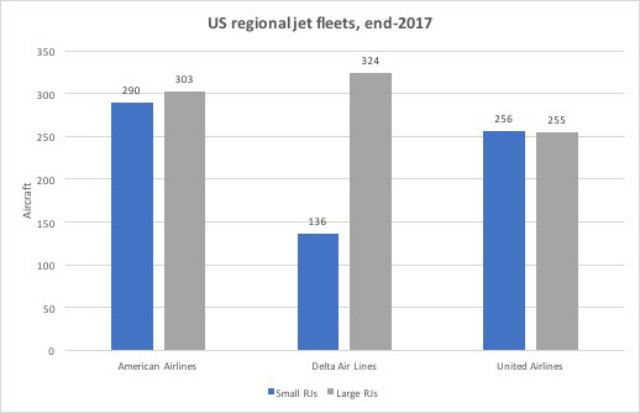 "[United] doesn’t need scope relief and has the ability to accomplish our growth strategy today," said Todd Insler, chairman of the ALPA United master executive council, in a letter to pilots after Kirby's remarks this month. He pointed to the clause allowing more large regional jets in exchange for a small mainline narrowbody as an example of this.

Kirby and Levy's comments, so far, have only suggested that they want to increase the number of large regional jets above 255. They have not commented on seeking a higher seat count or MTOW, either of which are necessary to add the next generation of regional jets, including the E175-E2 and MRJ90.

Delta will follow United into contract negotiations in 2019. The Atlanta-based carrier's scope limits it to up to 450 regional jets, including 125 small jets and 325 large jets, with the latter split between 102 aircraft with 51-70 seats and 223 aircraft with 71-76 seats.

The airline had 136 Bombardier CRJ200s and 324 large regional jets in its feeder fleet at the end of 2017, its fleet plan shows. The 10 50-seaters over the 450 aircraft cap are allowed under exceptions in the contract.

Executives at Delta have not spoken directly on whether they plan to seek more 76-seat jets or change scope limits to allow for larger and heavier aircraft in the next round of negotiations. The airline declines to comment.

However, the strategy laid out at its investor day in December 2017 sheds some light on its plans. It plans to reduce by 2023 the number of domestic seat departures on regional jets to roughly 20% – with 2% on small regional jets and 18% on large regional jets – down from 27% in 2017.

This would suggest a declining reliance on regional jets, especially 50-seaters, over the next five years.

Delta is alone among the US big three in embracing small mainline narrowbodies. After initially adding 88 717-200s in exchange for 70 more large regional jets in 2012, it ordered 75 CS100s in 2016 and plans to begin taking delivery of the aircraft later this year.

The carrier expects the domestic seat departures on small mainline aircraft to increase to roughly 20% in 2023 from 14% last year, its investor day presentation shows.

"We will not be looking to grant concessions to [Delta] in any section of our working agreement, including scope, and are presently in protracted JV-related negotiations that involve improving scope protections," says captain Bill Bartels, chairman of the Delta master executive council at ALPA.

American has the most generous scope clause in place among the US mainline carriers. The number of large regional jets with 66-76 seats is capped at 40% of its mainline narrowbody fleet, allowing it up to 320 of the jets based on a mainline narrowbody count of 799 at the end of 2017.

The Fort Worth-based carrier's regional fleet is capped at 75% of its mainline narrowbody fleet, which allows it a total of 599 regional aircraft.

American's feeder fleet had an average of 290 regional jets with up to 65 seats, and 303 aircraft with 66-76 seats in the second half of 2017, a count by the Allied Pilots Association (APA) shows. The airline has two configurations on its 110 Bombardier CRJ700s, one with up to 65 seats and one with 70 seats, which allows it to remain in compliance with scope.

Management at American has not commented recently on whether or not it plans to seek scope relief or a change in the definition of a large regional jet in the next round of contract negotiations. The airline declines to comment.

The last change that American sought was a change in the definition during its last round of negotiations in late 2014. It wanted to redefine a large regional jet as one with 71-76 seats instead of 66-76 seats, a change that would have allowed it to add up to 81 more 76-seat aircraft than its agreement at the time allowed.

"If American wants to fly more large regional jets, we'll be happy to fly them at the mainline," says the APA, adding that scope concessions are a non-starter for the union.