The US Defense Advanced Research Projects Agency (DARPA) is planning to start autonomous flight tests of a Sikorsky UH-60A Black Hawk in autumn 2019.

Over the course of 2019 and 2020, the Pentagon’s research agency says it will test fly the US Army helicopter with two pilots, one pilot and no pilots using its Aircrew Labor In-Cockpit Automation System (ALIAS). ALIAS is based on Sikorsky’s Matrix Technology – an autonomous flight control system that can be used on fixed-winged or rotary aircraft that has been in development for commercial and military use since 2013. 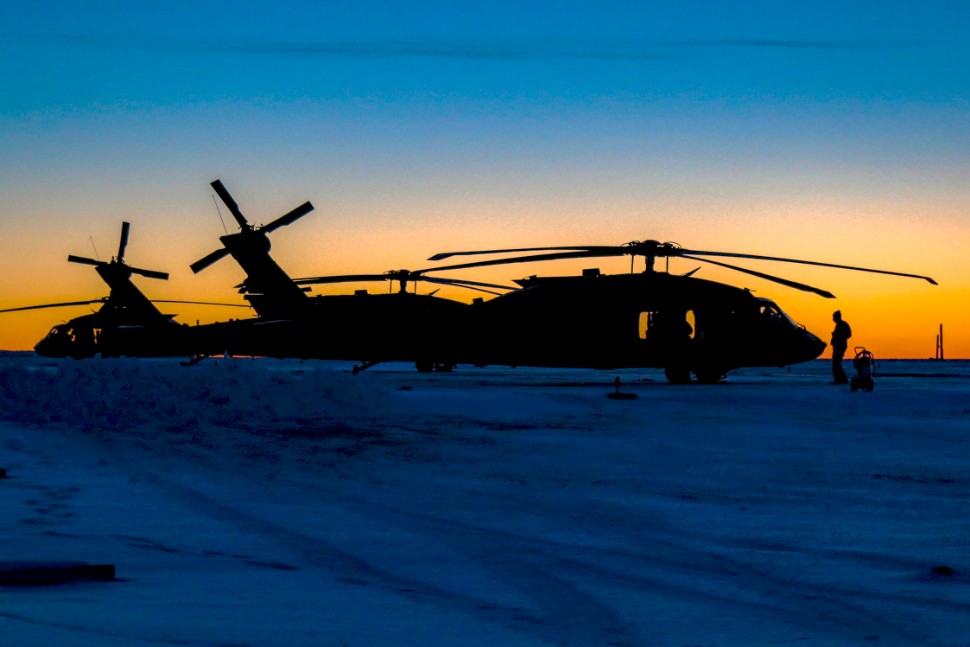 The army got a taste of Matrix in November 2019 when its pilots flew the Sikorsky Autonomy Research Aircraft (SARA) for the first time – a modified commercial S-76B with autonomous controls. The aircraft was operated at different times by pilots on board and pilots on the ground.

As part of those test flights, pilots participated in various scenarios including an automated take-off and landing manoeuvre; an obstacle avoidance manoeuvre, during which the helicopter avoided unknown objects, such as wires, towers and moving vehicles that were detected by onboard LIDAR and cameras; an automatic landing zone selection manoeuvre during which the helicopter's LIDAR sensors determined a safe landing zone; and a contour flight mission, when the helicopter flew low to the ground and behind trees.

DARPA now plans to add many of these capabilities to an “Alpha” variant of the UH-60 via a retrofit kit. The agency is working to replace the ageing helicopter’s mechanical flight control system with a fly-by-wire system, which is needed for ALIAS to be integrated.

If the Black Hawk experiment proves successful, it could be the first step towards retrofitting a large portion of the army’s helicopter fleet with autonomous flight capabilities. DARPA believes autonomous flight could have broad benefits, including improving aircrew mission effectiveness and increasing safety, as well as reducing operating and training costs.

“We might be able to perform some missions with fewer pilots or no pilots,” says Lieutenant Colonel Philip Root, the acting deputy director of DARPA’s Tactical Technology Office. “If we can demonstrate there is a set of missions where this applies we could maximise the use of aircraft and decrease the need for human pilots across all missions. That allows us to provide cost savings to the government.”

DARPA envisions ALIAS as running a host of software apps that could allow it to assist pilots in the cockpit on specific missions. For example, only some army Black Hawk pilots are specially trained to deploy M-136 Volcano anti-tank landmines from the air. “It’d be great to take a junior pilot and add the ALIAS app, and now he’s minefield capable,” says Root, adding that autonomy could also help save flight training time.

However, before the US Army can realise any of those benefits it needs to find new ways for human pilots and ALIAS to work together. If autonomous flight is unpredictable, pilots may not trust it enough to use it. “You don’t want the system to begin flying aggressively when the pilot is not expecting it,” says Root.

Equally, you don’t want a helicopter reacting conservatively in other scenarios, he adds. For example, during nap-of-the-earth flight a helicopter needs to hug a narrow flight path to avoid radar detection, so aggressive obstacle avoidance may be warranted by the autonomous system.

Part of the solution may involve mimicking the way co-pilots flight plan and co-operate in the cockpit – observing obstacles, talking about who has control over the helicopter, and calling out what they intend to do next, says Root.

“You don’t necessarily just want to have visual cues because the pilot is very visually stimulated already and wants to look outside. So auditory cues are appropriate because that is how a pilot and co-pilot typically communicate,” he says. “The challenge is you don’t want the ALIAS talking all the time and being annoying. You need to know when the right context to communicate is.”

DARPA plans to spend most of its time in 2019 and 2020 experimenting with how ALIAS can assist solo pilot flight, because it views human-machine interaction to be its most difficult engineering problem. “There’s not a great deal of exploration of how to work with humans. And humans are really hard to optimise,” says Root. “We need time to experiment.”