ANALYSIS: Battle of the LCCs in Taiwan

A lot can change in two years, especially when one is a low-cost operator in Taiwan. In late 2014, two new homegrown carriers burst on to the Taiwan low-cost scene. V Air has since suspended operations while Tigerair Taiwan continues its struggle to make its mark.

However, Taiwan’s relatively small domestic market of 23.5 million, combined with a reliable high speed rail network, made them cautious about jumping on the bandwagon. Besides, there were already six Taiwanese carriers, and it seemed unrealistic to expect the market to absorb another.

TransAsia surprised the market, then, when it announced that it has received regulatory approval to launch Taiwan’s first LCC. China Airlines followed with a similar announcement, saying it felt its position as flag carrier meant it needed to respond to the challenge, having seen foreign LCCs’ market share in Taiwan grow.

The challenge, however, quickly proved to be too great, at least for one carrier. TransAsia’s low-cost arm V Air stopped flying on 1 October, as it entered into a one-year grounding as part of a “long-term restructuring plan”.

It is interesting to note how quickly low-cost traffic into Taiwan has boomed over the past five years. CapStats, based on FlightGlobal schedules data, shows that the number of LCCs flying into the island grew from a mere six in 2010 to 15 in 2013, before hitting a peak of 21 this year. This saw LCC capacity in ASKs into Taiwan grow more than fourfold between 2010 and 2016.

LCC market share has also climbed steadily, doubling from 2.8% in 2010 to 5.6% in 2013, and now accounting for about 11.5% of the island’s total traffic. Almost every southeast Asian country with low-cost operators has at least one LCC flying into Taiwan.

“I think they have grown to such a state where far too many discount carriers are flying there to justify the numbers inbound and outbound,” says Shukor Yusof, founder of the aviation advisory firm Endau Analytics.

“LCCs by definition, when you have a certain number, amounts to very intense competition. So I would think that given that intensity, it would be very natural for some carriers to be scaling back or even shut down altogether.” 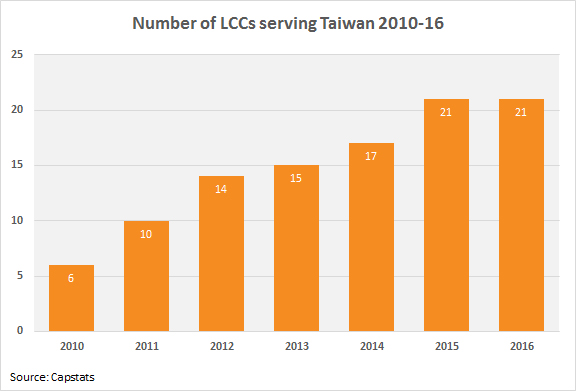 Before it ceased operations in October V Air had doubled capacity between 2015 and 2016. The majority of its services were to Japan, although it also served Busan, Chiang Mai and Bangkok.

All its services to Japan, except those to Ibaraki, went head-to-head with several other budget operators. Taiwan’s status as a former Japanese colony means there are cultural similarities that have boosted travel between the two.

It has not helped Taiwanese LLCs that budget operators from Korea and Japan, especially, have been active in this space. All three Japanese budget airlines – Peach, Vanilla Air and Jetstar Japan – as well as all five Korean LCCs – Jeju Air, Air Busan, Eastar Jet, T’Way and Jin Air – have services to Taiwan.

Like V Air, Tigerair Taiwan has a good part of its network focused on the Japan market, flying to nine points in the country. Its top three routes are to Macau, Tokyo and Osaka. 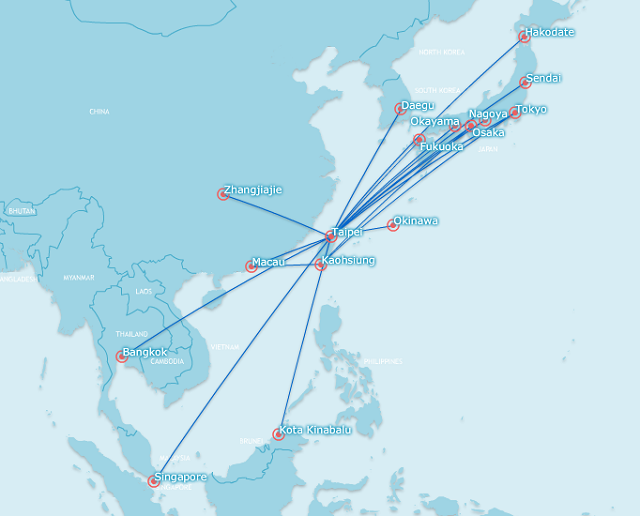 Tigerair has, however, announced plans to suspend services to Singapore and Kota Kinabalu from 3 January 2017, saying this will help “adjust its network performance”. It will also seek to increase frequencies to “high demand markets” such as Macau, Okinawa and Tokyo.

China Airlines chairman Ho Nuan-Hsuan told FlightGlobal in October that one of his priorities was to decide on what it wanted to do with Tigerair Taiwan by the end of the year. He hinted that China Airlines could take full control of the LCC, which would give it more flexibility in managing the routes it flies, or possibly let it exit the low-cost scene.

“It hasn’t been that easy getting traffic rights, so the routes LCCs fly are the same ones that China Airlines is flying. It eats into our market share,” he said. Singapore-based Tiger Airways, which holds 10% of the joint venture, has an absolute right of refusal on major decisions, he added.

He also revealed that Tigerair Taiwan has lost more than two thirds of its NT$2 billion ($63.1 million) capital since it started operations. Ho pointed to several issues that have made the LCC's journey more challenging: the relatively late launch of the carrier, Taiwan being a less-than-optimum home base for an LCC, and difficulties in securing traffic rights.

Endau Analytics’ Shukor believes the two homegrown Taiwanese LCCs simply entered the game too late. “It was late, it was unwise, it has been very difficult,” he says. “They came in because they saw the competition that was there. Clearly, it doesn’t justify the operations. To fly somewhere you need to see the economics of it.”