Airbus and Boeing enjoyed another healthy rise in airliner output during 2018, to over 1,600 aircraft. Sales also remained strong – at 1,640 net orders – although this represented an almost 20% decline on the previous year.

Boeing was ahead of its European rival by both measures last year, setting a new industry delivery record of 806 aircraft and securing 893 net orders. Airbus's tally was 800 deliveries and 747 net orders. 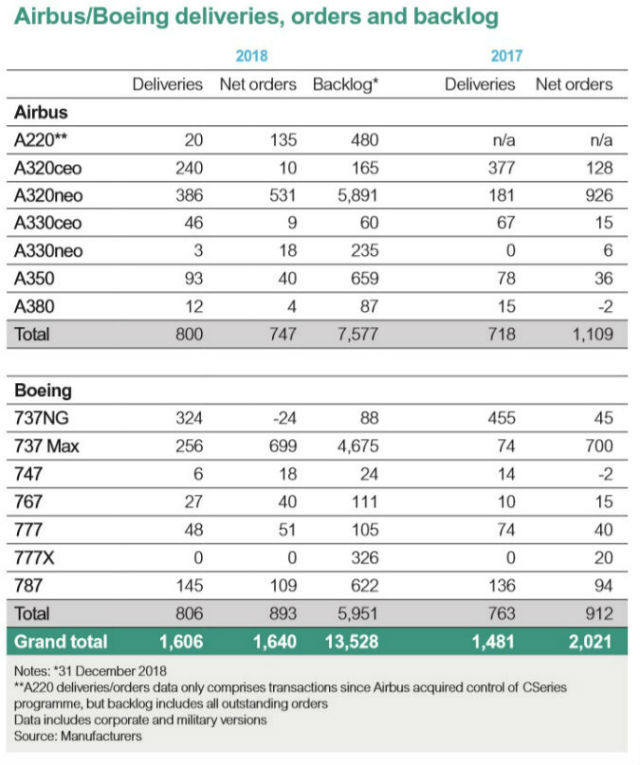 However, like-for-like comparisons are complicated by the fact that Airbus is including transactions for the former Bombardier CSeries single-aisle (now A220) in the period since Toulouse acquired control of the programme in July 2018. The backlog includes all outstanding orders for the twinjet.

Airbus's 800 deliveries represent a company record and an increase of 11% on 2017. Its 626 A320-family aircraft deliveries (240 A320ceos and 386 A320neos) put it significantly ahead of its rival, and single-aisle shipments were bolstered by 20 A220s. The inclusion of A220s ensured that Airbus achieved its delivery target – although when that ambition was first stated, the expectation was that the former Bombardier twinjet would not be included in the total.

Boeing also fell slightly short of a target. It had been aiming for 810 to 815 deliveries during the year. However, production ramp-up on the single-aisle line caused 737 output to rise 10%, to 580 units, comprising 324 NGs and 256 Max aircraft.

While Airbus was king in the narrowbody arena, Boeing was again in charge at the widebody end of the market. The US airframer's deliveries of 747s, 767s, 777s and 787s totalled 226 aircraft, while Airbus shipped just 154 aircraft in its widebody product line. Among the 49 A330s delivered were the first three A330neos – fewer than originally planned, largely as a consequence of supply problems at Rolls-Royce. Twelve A380s were delivered, in line with targets.

From a sales perspective, Airbus trailed Boeing in net orders for the first time since 2012. Toulouse's deficit was spread across both single-aisle and widebody lines, with the 737 outselling the A320 by over 130 orders. And Airbus continues to misfire in the more lucrative widebody sector, where it was outsold by its rival to the tune of three to one.

Although the rising output and lower order intake meant that the industry book-to-bill ratio declined in 2018, it was still just above one.

"I'm surprised that Airbus and Boeing were able to achieve a book-to-bill marginally greater than one, particularly because they each started the year with full orderbooks and very limited near-term open delivery slots," says Rob Morris, global head of Flight Ascend Consultancy. "Although global traffic demand remained strong in 2018 and growth is expected to continue in 2019, the medium-term outlook is uncertain given the length of the cycle."

The airframers are yet to provide any official guidance on their 2019 outlook, but with their combined firm backlog now standing at over 13,500 aircraft they have many years of production already on their books, notes Morris.

"At 2018 production levels, Boeing opens the year with a backlog representing more than seven years of production, and Airbus more than nine. Flight Fleets Analyzer indicates an expectation of 924 deliveries for Airbus this year and 870 for Boeing. These are probably a touch high, and we expect closer to 890 and 860 respectively.”

Morris adds that it is hard to envisage a scenario where 2019 orders can exceed 2019 deliveries. "So expect similar or lower net order numbers this year," he says.