Four decades ago, a little aerospace company had big ideas about shaking up the business aircraft sector with a corporate jet design originally crafted by one of the aviation industry’s 20th century icons.

The company was Canadair and the aircraft was its Challenger 600, which made its first flight 40 years ago next month, on 8 November 1978. And that aviation icon who created the original concept – as the “LearStar 600” – was none other than Bill Lear. The Challenger – which become the first aviation asset in the Bombardier product line in August 1986 – was the programme that gave Canadair the right to play in the large-cabin business jet market, and spawned the Global series. It also, of course, was the baseline from which Canadair developed a small airliner to tap what many originally believed was a niche market for regional jets. The aircraft went on to rack up orders well into four digits. 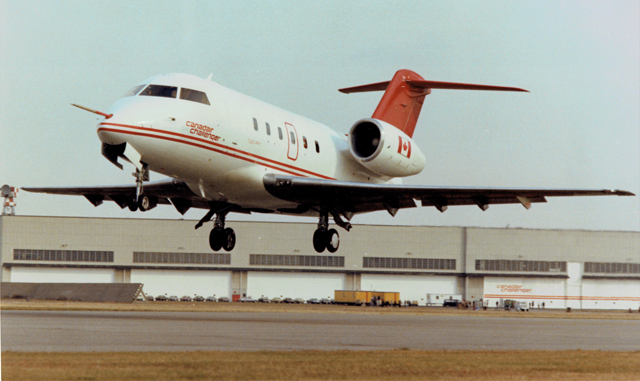 But it all began back in the mid-1970s, when at the age of 73, Bill Lear wasn’t ready to hang up his design and innovation hat. As Flight explained in its original Challenger technical description from 1978, Lear’s concept combined supercritical-wing technology with a spacious and wide cabin along with high-bypass-ratio turbofans in the shape of Avco Lycoming (now Honeywell) ALF502s. Dubbed LearStar, the “600” designation denoted its promised cruise speed in mph.

“Lear’s objective was a low-cost, long-range aircraft which would outperform every other type in its category,” wrote Flight in 1978. “In 1975, the LearStar 600 [in airliner configuration] was a 37-seater which weighed only 23,000lb fully loaded. Even so, Lear declared that its advanced wing and engines would carry 14 passengers over 3,000nm, cruising at an altitude of 50,000ft.”

Lear was prepared to build the LearStar himself – and Federal Express (now FedEx) was ready to place a large order – but in 1976 it was announced that Canadair had agreed to share in the development as the Canadian company sought to enter what was then the long-range business jet sector with this revolutionary design.

Canadair, which had bought the exclusive design rights, was confident it could sell at least 250 aircraft and immediately corralled a strong marketing team. This was headed by famed business jet sales guru Jim Taylor who had established a solid reputation making the Dassault Falcon and Cessna Citation commercial successes. 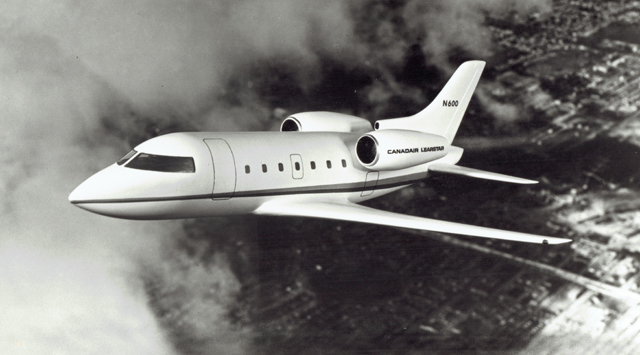 The government and Canadair agreed to contribute $70 million each to “CL-600” development, on condition that 50 orders were secured and a deal with Federal Express in October 1976 for 25 aircraft signalled the green light. The “Challenger” moniker was adopted but Lear remained as a consultant.

“Bill Lear is usually thinking beyond what we are doing and often beyond what we want to be doing,” explained Canadair’s technical executive vice-president, Harry Halton, in Flight at the time.

The LearStar design underwent a major revamp as Canadair pursued what Flight described as “a spectacularly rapid development programme”. One of the key changes was to increase the fuselage diameter from “88in” (2.2m) to “106in” to create a true widebody executive jet. But Lear was unimpressed with what Canadair had done to his concept, dubbing it “Fat Albert” and walking away from the programme.

The incumbent business jet players admired Canadair’s bold ambitions with the Challenger’s performance, but were cynical about whether it could achieve its targets. “I think we all are [worried]. If the Challenger can do as they claim it can do, it’ll be some aeroplane,” said one seasoned Lockheed JetStar salesman. “But we don’t quite see how they’re going to get there from here.”

Undaunted by the doubters, Canadair pressed on and within two years of launch, Challenger prototype “1001” (C-GCGR-X) was rolled out at Canadair’s St. Laurent, Montreal plant, on 25 May 1978. The programme had accumulated 127 sales by that time, and Jean Chrétien, Canada’s minister of industry, trade and commerce, declared “Vive le Challenger!” as he presided over the unveiling.

The Challenger had an advanced systems design for a 1970s business aircraft. The 600 had triple redundancy in the flight-control system, featuring two hydraulic systems pressurised by engine-driven pumps, along with a third powered by an electric pump. Its AC electrical system – rather than the more traditional DC system – was also a first for the sector. The higher-voltage AC architecture saved weight by using lighter AC generators and thinner wiring.

A few months later than originally scheduled, Challenger 1001 lifted off from the runway at the now-disused Cartierville airport on 8 November 1978. At the controls were chief test pilot Doug Adkins accompanied by Norm Ronaasen. Tragically, two years later Ronaasen would lose his life in a flight-test accident that resulted in the loss of the prototype Challenger. 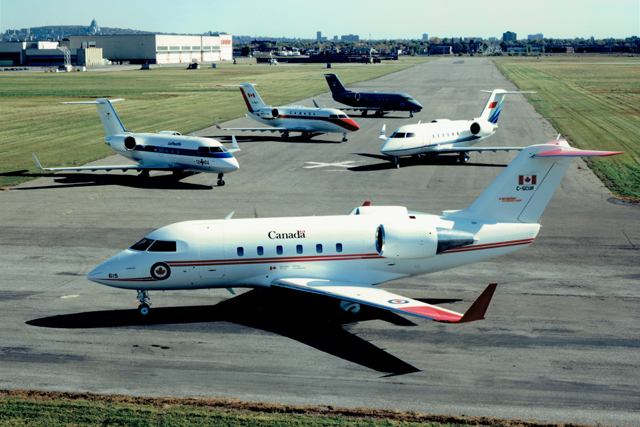 During flight testing, reality hit Canadair’s high ambitions for the Challenger when the ALF502 ran into technical issues, not least of which was a problem with the reduction gear, which had experienced “a series of ground testbed failures”. While this threatened the flight-test schedule, the engine’s higher specific fuel consumption also affected the range guarantees.

As it sought to address these headaches, Canadair had also identified additional markets for its new jet. While sales of the 600 were coming from existing Hawker Siddeley HSI25, Falcon 20 and Rockwell Sabreliner operators, Canadair plotted to address the Grumman Gulfstream II replacement market with a stretched “Challenger 610E” (for extended), powered by General Electric CF34-1A engines.

Featuring a 2.7m (8ft 10in) fuselage extension, the aircraft would seat 15 passengers in a corporate configuration, increasing to 40 in airline layouts. Deliveries were due to begin in 1983 and Federal Express had already switched its order for a cargo version of the stretch.

In the end, neither the 610E nor the Federal Express order materialised, but the Challenger E plan helped provide a path to GE power – and laid the foundations for an eventual stretch for the airline sector. With concerns growing over the ALF502’s performance and reliability, Canadair decided to offer the CF34 as an alternative on the baseline model, designated the Challenger 601. Many of the 610 orders were converted to the new 601 and the engine would eventually become the standard offering.

Challenger deliveries finally got under way in 1980, by which time TAG Aeronautics had become a major partner on the programme as the exclusive distributor and representative in the Middle East.

The third Challenger 600 was re-engined and modified to serve as the 601 prototype, making its first flight – again with Doug Adkins at the controls – on 10 April 1982. Flight Fleets Analyzer shows that deliveries of this variant began towards the end of that year. Production of the CF34-powered Challenger – in 650 form – continue to this day with almost 1,000 delivered. 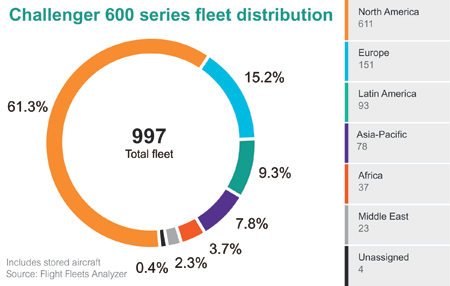 Challenger 600 deliveries ended in 1985 after the delivery of 83 aircraft, according to Fleets Analyzer. The baseline GE-powered 601 was superseded by a version equipped with improved CF34-3A engines, dubbed the 601-3A. Deliveries of this variant began in 1987.

Each iteration of Challenger has incorporated incremental improvements in cabin and cockpit avionics as well, of course, as well as payload and range performance. A big change came with the introduction of the 604 in 1995, which featured advanced CF34-3B engines, higher weights and additional fuel capacity, along with a smart new glass cockpit using Rockwell Collins Pro Line 4 avionics.

By the time the 604 arrived, another strand of the LearStar’s original family plan had become a reality in the form of the Canadair Regional Jet or CRJ. Developed from the Challenger airframe – and certificated as variant of its type certification – the CRJ featured a modified wing and other changes, key to which was a fuselage stretch initially sized to seat 50 passengers. More advanced derivatives now carry up to 100.

Deliveries of this family of enlarged derivatives – which include Challenger corporate variants – now stand at almost 1,800 aircraft.

Bombardier rolled out the 500th Challenger 600-series – a 604 – in June 2000 as demand remained strong for the jet two decades on from its debut. By then, Bombardier had used the Challenger’s airframe as the basis for the development of its Global family of large-cabin long-range business jets.

But continued demand for the Challenger saw development of another upgraded variant, the 605, which arrived in 2007. This featured a revised tailcone and more cabin upgrades incorporating enlarged and relocated windows, while pilots gained another cockpit update featuring Pro Line 21 Advanced avionics.

The 605 was succeeded in 2015 by the refreshed Challenger 650, featuring 5% higher-thrust CF34-3B engines, a revamped interior and the Bombardier Vision flightdeck. The latter is based on the 605’s Pro Line 21 avionics system incorporating synthetic vision imagery.

The first Challenger 650 debuted with NetJets in late 2015, becoming the 1,000th Challenger 600 series aircraft to enter into service.

Four decades after that historic first flight in 1978, over 1,060 Challengers have taken to the air and production continues of the latest 650 variant. As well as the success in its prime market as a VIP transport – with famous customers including Formula 1 multiple world champion Lewis Hamilton – the Challenger has found success with several military operators.

That’s not bad for an aircraft that had so many doubters when first proposed, and one for which even its creator had only envisioned 250 sales. Happy 40th, Challenger 600 series!