Flying across the country commercially in a supersonic jet will require more than the invention of a capable aircraft. Laws must be changed.

Since 1973, the USA – where two start-ups are developing supersonic business jets and a third is pursuing a design that could work as a large business jet or small airliner – has banned supersonic flight overland.

All three start-ups – Aerion, Boom and Spike – say they have crafted their designs to work commercially on overwater routes only. Meanwhile, traditional OEMs, such as Gulfstream and Dassault, have shelved active development programmes, saying the business case for a supersonic jet does not work in the absence of an overland, high-speed capability. But all of them agree the technology exists today that should render irrelevant the reason for the overland supersonic ban in the first place.

That is why the US Senate version of a proposed bill to reauthorise the Federal Aviation Administration in the fiscal year that began on 1 October is so important. For the first time since the overland ban on supersonic flight took effect, an amendment to a legislative proposal contains language that could lead to the dismantling of the 1973 law within a year – or not.

Section 5017 of Senate bill 1405 – The Federal Aviation Administration Reauthorization Act of 2017 – would order the FAA to review federal policies, regulations and policies with regard to supersonic flight overland and report back within 180 days with recommendations on what legal changes are necessary to allow supersonic aircraft to fly over the country.

The timing of the FAA report is critical. By giving the FAA a six-month deadline, lawmakers could be prepared to act on the recommendations in the next annual cycle of legislative proposals in 2018.

Not that congressional legislation typically works in such clockwork fashion. Technically, the reauthorisation bill that includes section 5017 should be passed by the end of September, but a deal between the Trump administration and Democratic Party leaders to extend the debt ceiling to early December delays the final Senate vote on the bill. Even if it is passed later this year, the Senate provision must be reconciled with the version of the bill passed by the House of Representatives, which at the moment contains a provision that expresses support for commercial supersonic flight but stops short of the Senate’s call for action.

Meanwhile, the manufacturers are closely watching the proceedings. In the USA, Gulfstream, in particular, has been most active among traditional manufacturers in pursuing a supersonic business jet. The company teamed with Sukhoi in the 1990s to develop a conventional supersonic transport for executives, then went on its own in the following decade with the X-54 Whisper concept for a design that produces a relatively quiet boom as it travels faster than the speed of sound.

At the moment, Gulfstream offers four products – G650, G650ER, G500 and G600 – that fly faster than nine-tenths the speed of sound, nearly approaching the Mach 0.935 top speed of the Cessna Citation X+.

“These aircraft have confirmed that in business aviation, speed matters,” Gulfstream tells FlightGlobal. “Based on numerous studies, an assessment could be made that civil aircraft cruising speeds above Mach 1.0 would truly revolutionise travel, especially if overland supersonic capability can be provided. Unfortunately, the current ban in the US and many other countries limits any benefit of possible product offerings to only those operators who routinely travel over international waters, thus constraining the market and closing a robust business case. If a rational noise standard can be developed to allow supersonic operations overland, this would certainly broaden the opportunity for potential supersonic product aircraft.”

As it waits for lawmakers to act, Gulfstream continues to maintain a small team of researchers on technologies for mitigating sonic boom noise.

Government agencies are also still active in developing technologies to reduce or mitigate the noise of sonic booms. In August, NASA performed a series of tests at Kennedy Space Center in Florida, which measured traditional sonic booms in the presence of atmospheric turbulence. Environmental conditions can play a significant part in the noise signature of a sonic boom, even if the aircraft is designed to minimise the pressure wave that produces the familiar double-crack of a vehicle crossing the speed of sound.

Meanwhile, NASA is developing a supersonic X-plane designed by Lockheed Martin to perform an acoustic survey of how effective modern design techniques are at mitigating noise. Lockheed’s design is shaped to produce a boom measuring 75PLdB, far less than the BAC/Aerospatiale Concorde’s maximum noise of over 105PLdB. If the supersonic ban is repealed by Congress, it will likely be replaced by a noise limit.

“Now this is the real question that needs to be answered – how quiet is quiet enough?” Gulfsteram says. “The sonic boom research community mentioned above has demonstrated analytical design capability to develop aircraft shapes fairly consistently in the 80PLdB range. Our internal studies have shown that a feasible noise standard may need to be this quiet or possibly even lower for worldwide acceptance. What’s important to consider here is that at these sonic boom levels, we are talking about radically different noise levels than experienced from Concorde or typical fighter aircraft, more akin to a very low and distant rumble of thunder or hearing your neighbour close the trunk of their car.”

The timing for setting a noise standard for supersonic booms had appeared to be waiting for data from NASA’s acoustic survey with the X-plane, which isn’t scheduled to begin until 2022. But the amendment now tabled in the Senate suggests that some lawmakers want to move faster.

Their interest seems driven by the lobbying efforts by Boom, which is developing a 40-seat, supersonic airliner that could also be used as a business jet. Earlier this year, Boom hired Eli Dourado, who as a former senior research fellow at George Mason University’s Mercatus Center co-authored a report calling on Congress to repeal the ban. 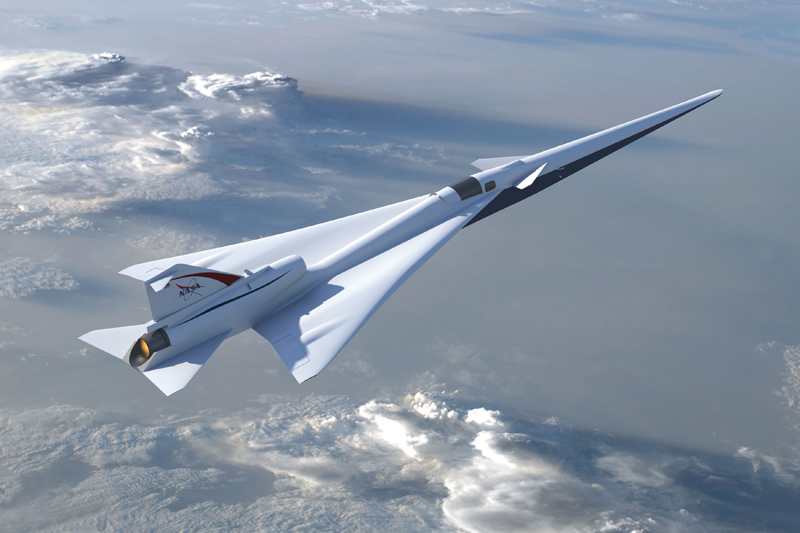 Scheduled for 2022, the X-plane will perform an acoustic survey at speeds above Mach 1.0

“Boom supports the senate version of the text as proposed. A great thing about the Senate bill is that it would create a clear specific path to supersonic flight overland,” Dourado says in an interview.

Timing is an important factor for Boom as it moves toward fielding an operational aircraft. The company plans to fly a sub-scale prototype jet by the end of the year, then deliver a 40-seat operational jet into service between 2022 and 2025. If a supersonic noise standard is in place in US law by 2019, Boom’s designers would have time to incorporate noise-softening elements before the aircraft is fielded.

“I think it’s really important to do something about overland flight now. We would be able to incorporate that information into the design. If we’re unable to know what the overland standard is we won’t be able to design the airplane to meet it,” he adds.

For Boom, however, the noise the aircraft makes is not all-important. The 40-passenger airliner might be capable of flying from New York to Los Angeles in 2.5h, but it must be able to compete financially. Boom-shaping techniques can help to open that overland market, but pushing the standard too far would require design changes that may compromise the aircraft’s economics.

NASA’s X-plane “is going to be quiet but it’s not going to be a good airliner. It’s about how to strike the right balance,” Dourado says. Setting the noise standard at 80PLdB may be too stringent. “That would be tough. A little bit above that is pretty doable,” Dourado says. “We’d have to see what the standard is and then make this a decision about a plane that is only going to go over the water or are we going to try to make it work for overland.”