Boeing 747-400s may be in the twilight of their service lives, but one pristine example is being readied for what promises to be a distinguished second career. Seen here in late January at Long Beach airport, this ex-Virgin Atlantic example will soon be carrying LauncherOne rockets built just up the road by sister company Virgin Orbit's air-launch service for small satellites. 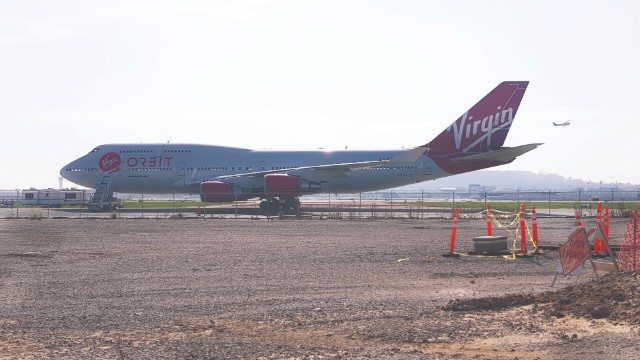 Speaking recently to FlightGlobal, Virgin Orbit vice-president special operations Will Pomerantz explained that December's successful captive carry tests will soon be followed by flights with a LauncherOne loaded with a simulated mass of its liquid oxygen-kerosene fuel, and then by a drop test to trial all aspects of the air launch operation except for actual rocket ignition.

Meanwhile, a fully loaded rocket-aircraft system, with flightcrew of two pilots and three mission controllers – in a launch control centre on the 747's upper deck – will carry out what amounts to a "dress rehearsal on the ground".

Pomerantz declines to detail the timetable but says Virgin Orbit is holding to its long-stated plan to launch during the first half of this year.

Cosmic Girl will carry the 70ft (21m) LauncherOne on the so-called "fifth engine" mounting point under the left wing; during a steep climb at 30,000ft it will release the rocket.

The fifth engine facility makes the 747 attractive to Virgin Orbit, because Boeing did the engineering work to validate it decades ago. And, says Pomerantz, while in practice that capability – intended to transport a spare engine for a grounded aircraft – was not used often in airline service, there is enough experience with it to have convinced Virgin Orbit that a 747 could be modified relatively easily to serve as a launch platform.

LauncherOne is much longer than a 747's engines, so flight testing needs to establish its vibration characteristics. Drop tests, says Pomerantz, will show what happens to the aircraft after release – does it nose up or nose down? – and will also validate operating procedures for managing the offset load. Virgin Orbit believes left-right imbalance can be managed with asymmetric fuel loading.

Pomerantz notes that Virgin Orbit's pilots have lots of military experience, and so have experience "dropping things".

In any case, air launch experience dates to the 1950s and the US Air Force's X-15 programme. Making the most of previous experience to build a robust, dependable launch service that can be sold for $12 million per flight is a hallmark of the Virgin Orbit plan. Pomerantz stresses that the company has focused its innovation efforts on manufacturing and operations, not on breaking new ground in rocket design to aim for cutting-edge performance.

The two-stage LauncherOne and its Newton engines feature well-known designs but incorporate advanced 3D printing technology to speed up construction; proprietary rocket avionics are tailored to rapid flightplan calculation, to accommodate the short-notice changes in launch point that are both a characteristic and an advantage of air launches.

And the choice of a 747 builds on the huge operational experience that goes with such a popular type, while also giving Virgin Orbit a relatively easy route to replacing or expanding its fleet. As Pomerantz says, there are many 747s available for "single-digit millions of dollars". The modifications to Cosmic Girl took a year, but could probably be reproduced more quickly.

Meanwhile, there is at very least some good karma hanging over this project. Cosmic Girl may be the perfect name for a Virgin Orbit aircraft, but it was also the aircraft's name while in Virgin Atlantic service. And, Pomerantz adds, chief test pilot Kelly Latimer – a retired US Air Force Lieutenant Colonel – just happens to fly with the callsign "Cosmic".