Delta Air Lines and WestJet have finalised their planned joint venture, a pact that is expected to bring benefits to both carriers.

The partnership will allow the airlines to co-ordinate schedules and fares, jointly market and sell flights and provide other commercial benefits if approved by regulators in Canada and the USA. It would be the first such venture in the market, following on from Delta's successful tie-up with Aeromexico.

"Delta's future is global and together with WestJet, we can augment the two airlines' capabilities and bring together our strengths in this important transborder market," says Ed Bastian, chief executive of Delta. "Combined, we will be able to offer more destinations to customers with an integrated network, superior airline products, improved airport connections and significantly enhanced frequent flyer benefits."

The partnership will bring together the second- and fourth-largest carriers between Canada and the USA. Delta carried 11.3% of passengers and WestJet 16.9% during the year ending in January – a joint 28.2% market share – the latest US Department of Transportation traffic data shows.

Only Air Canada has a larger share, carrying 43.9% of passengers over the period, the data shows. United Airlines was third, between WestJet and Delta, with a 12.2% share. 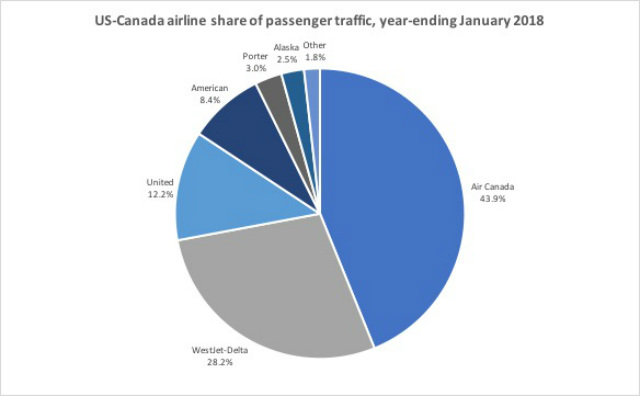 During the year ending in January, Delta grew its Canada-USA capacity by 8.2%, while WestJet achieved 4.8% growth year on year, FlightGlobal schedules data shows. New routes include New York LaGuardia-Ottawa on Delta, and Montreal-Boston and Toronto-Nashville on WestJet.

However, Air Canada's growth eclipsed both carriers, with capacity in the market up by 10.5% during the period, according to schedules.

The combined clout of Delta and WestJet, plus their individual sales reach in their respective countries, should allow them to grow further, and potentially capture a larger joint share of Canada-US traffic.

The joint venture checks boxes for both Delta and WestJet. It continues Delta's strategy of global growth through deeper partnerships and not necessarily its own metal, and helps WestJet fulfil its ambitions to become a more global carrier.

"Delta really doesn't have a lot of exposure to Canada relative to what it would like to have, and WestJet hasn't expanded as aggressively into the USA as maybe it was thinking it would," says Helane Becker, an analyst at Cowen, in an interview with FlightGlobal.

She cites the collapse in oil prices in 2014 and subsequent slump in the Alberta economy, where WestJet is based, for the Canadian carrier's slower-than-expected US growth.

In addition, WestJet's global ambitions, which include its order for 10 Boeing 787-9s in May 2017, will be buoyed by its closer integration with Delta's global network, which spans six continents.

Delta and WestJet serve 63 transborder markets, connecting 11 airports in Canada with 26 in the USA as of July 2018, schedules show.

However, their network remains well behind that of market leader Air Canada in July.

The partnership will give Delta the most extensive North American network spanning Canada, Mexico and the USA when coupled with its Aeromexico joint venture. No other single carrier in the region, including Air Canada, American Airlines and United, can replicate the network.

The Delta-WestJet pact may be the impetus that Air Canada and United need to renew their joint venture ambitions. The Star Alliance carriers sought an immunised pact in 2012. However, the conditions placed on the proposed partnership by the Canadian regulator were considered too onerous and the venture was dropped.

"We think there are opportunities for us to get closer in the transborder [market]," said Calin Rovinescu, chief executive of Air Canada, on its United codeshare in an interview with FlightGlobal in June 2017.

While he spoke before the Delta-WestJet partnership was announced, he accurately noted that competition in the Canada-US market had increased since 2012, improving the likelihood of antitrust approval.

Air Canada and United carried a combined 56.1% of passengers between Canada and the USA during the year ending in January, DOT data shows.

United vice-president of domestic network planning Ankit Gupta, responding to questions on its capacity cuts to Canada, said in June that the carrier plans to "build that [network] back". He did not comment on a potential Air Canada tie-up.

The Chicago-based carrier's transborder capacity will be down by nearly one-third this year compared with 2014, its peak in the market since 2010, schedules show.

"I think with new administrations in Canada and the USA, and new managements at both companies, you've got a rethinking of what they're intending to do," says Becker on the possibility of a renewed Air Canada-United pact.