Denver International airport will break ground next year on a $1.5 billion expansion project that will see it add 39 gates to its bursting facilities by 2023. 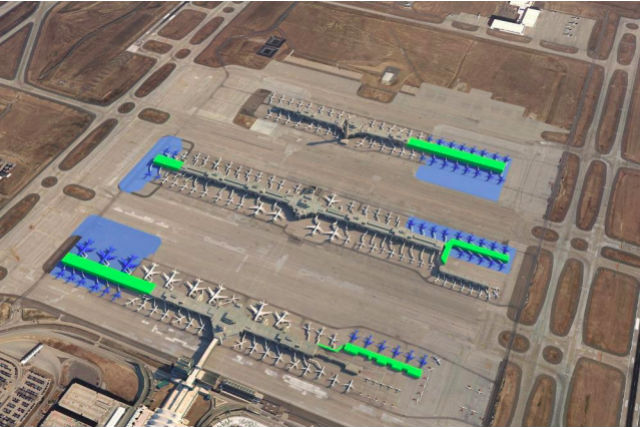 The project comes as the airport sees record passenger numbers, with the total forecast to surpass 60 million for the first time ever in 2017, despite its continuing to operate with facilities designed for around 50 million passengers.

"The airport is growing," said Kim Day, chief executive of Denver airport, at the November meeting. "The question is not will we need 39 gates, it's when we will need 39 gates."

Denver was the sixth busiest airport in the USA with 58.3 million passengers in 2016, airport and Federal Aviation Administration data shows. While traffic grew nearly 8% year-over-year in 2016, the growth came after nearly a decade of traffic hovering in the low- to mid-50 million passengers range.

While US airlines are set to close their eighth straight year of capacity growth in 2017, a myriad of factors have delayed Denver from embarking on a facilities expansion to meet demand. Top of this list are airline costs, which has been a central focus of the airport for years.

"We want to keep costs low for our airlines and not build if not necessary," Denver airport vice-president of air service development Laura Jackson told FlightGlobal at the ALTA Airline Leaders Forum in Buenos Aires in November. "Now it's necessary."

Denver was known for its high costs when it opened more than a year late and around $3 billion over budget in 1995. Cost per enplaned passenger (CPE), an industry measure of an airport's average costs, was $18.15 per passenger at the time, or about $29.80 today adjusted for inflation, according to local reports.

United Airlines, the largest carrier in Denver then as it is today, even instituted a $20 fee on passengers for each flight they took to or from the airport, local reports state.

Almost more important than costs is that airlines, for once, want more gates. Both Southwest Airlines and United, which handled 29.4% and 42.1% of airport traffic during the first nine months of the year, are asking for more space and saying they will expand if the facilities are available, says Jackson.

"I have lots of plans putting even more airplanes through [Denver] in the future," said Scott Kirby, president of United, in a presentation to employees in January.

True to form, the Star Alliance carrier is scheduled to grow seats at Denver 5.3% year-over-year in 2017, FlightGlobal schedules show. The growth has been driven by a shift to larger gauge aircraft with seats per day up 5.6% while average daily departures have remained flat at 372 flights. 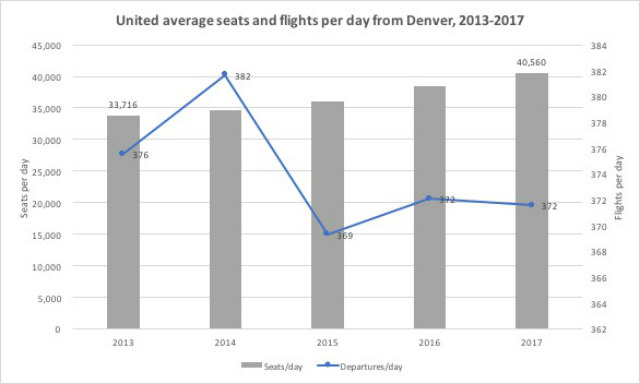 United does not plan to keep departures flat for long though. Its chief pilot for Denver Rob Biddle told pilots in a November newsletter that the airline plans to increase departures to roughly 400 per day by 2019, a move he claims could make the airport its second busiest hub in terms of flights.

"At that level we will surpass both [Houston Intercontinental's] and [Newark's] current daily totals respectively," said Biddle.

For comparison, United operated about 290 daily flights from Denver when the airport opened in 1995, local reports state.

Work on the airline's facilities is scheduled to begin on the western end of the concourse in April, the newsletter says.

Southwest, which only returned to Denver in 2006 after a 20-year hiatus, operated nearly 200 daily departures from the airport in October making it its fourth largest city, its website shows.

The Dallas-based carrier's seats at Denver are scheduled to grow 4.8% year-over-year in 2017 with flights up 4.2%, schedule data shows.

"We are in support of the gate expansion project," a Southwest spokeswoman says. She adds that the airline is working with Denver to determine how many of the 16 gates planned for concourse C it will use.

Southwest was the beneficiary of Denver's last gate expansion – and one of just two its undertaken since 1995 – when five gates were added to the western end of concourse C in 2014.

Frontier Airlines, the hometown carrier and third largest in Denver, declines to comment on the expansion project.

One of the big areas for growth for Denver is international traffic. Airlines have launched new service to Belize City, Cozumel and London Gatwick this year, and plan new or additional service to London Heathrow, Mazatlán and Paris Charles de Gaulle in 2018, schedules show. 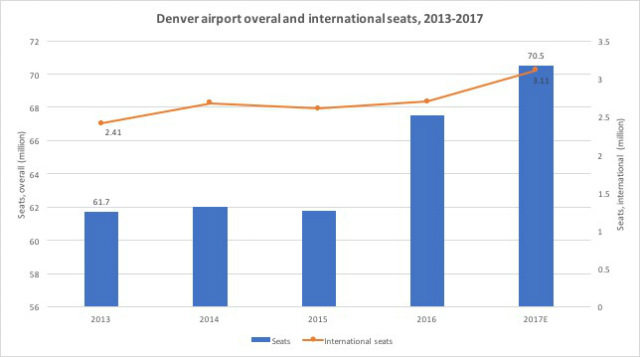 "Airlines are indicating they want to grow both internationally and domestically," says Jackson, adding that this includes Frontier, Southwest and United.

The planned works for concourse A include adding three additional widebody-capable gates to the north side of the facility for a total of nine, the presentation shows.

Jackson hopes that the continued strength of the Colorado market, as well as the planned new facilities, will allow the airport to continue to attract more international air service. This includes supporting the new flights that are already announced, including Copa Airlines to Panama City and Norwegian to Paris, as well as attracting new airlines like one of the Gulf carriers or landing a new route to Asia.

Denver airport is just the latest US airport to embark on a multi billion-dollar facilities expansion. These projects include Ronald Reagan Washington National airport's more than $1 billion investment in a new regional concourse and security checkpoint, and Seattle Tacoma International airport's around $2.4 billion investment in an expanded international arrivals facility and eight additional gates.

However, Denver, unlike either Seattle, Washington National or most others around the country, benefits from the fact that its facilities were laid out as part of a master plan that allows for at least two more concourses and six more runways to be built on its current footprint.

"When you look at spending $1.5 billion for 39 gates when [New York] LaGuardia is billion $8 billion, including $4 billion to rebuild the Central Terminal, that only nets them two new gates, we're really realising the benefit of having a large master planned airport that we can now expand," said Patrick Heck, chief commercial officer of Denver airport, at the November meeting.

Two separate terminal projects are underway at LaGuardia: the $4 billion redevelopment of a new Central Terminal, or terminal B, by LaGuardia Gateway Partners, and the $3.9 billion redevelopment of terminals C and D by Delta Air Lines. The works focus on replacing decades-old facilities with modern and spacious terminals, rather than adding gates due to the airport's slot restrictions.

The works planned for Denver will see the full build out of concourse B, while A will be completed to the west and C to the east under the master plan, says Heck.

Day adds that the airport forecasts it can handle up to roughly 80 million passengers annually by completing the three concourses at which time it will need to look at building a fourth concourse north of C.

Another benefit of Denver airport's master plan is that it can quickly respond to changes in demand. Any part of the gate expansion project, be it the western extension of A or the new North Finger on B, can be deferred independent of the rest of the programme at various points in the project, says Heck.