Never before has the US Air Force had to face an adversarial military that has stealth aircraft. Now, it must confront two: China and Russia.

In February, Russia’s Sukhoi Su-57 made its combat debut over war torn Syria. In the same month, China’s People’s Liberation Army Air Force started inducting the Chengdu J-20 into its combat units, with some reports saying the stealth aircraft has since spent time flying over the disputed South China Sea.

Long foreseeing this moment, when adversaries break its decades-long monopoly on the technology, the US Department of Defense has been working to find ways to test its ability to spot and shoot down stealth aircraft. One part of that effort is the Director of Operational Test and Evaluation (DOT&E) office’s development of a fifth-generation aerial target (5GAT), a full-sized stealth unmanned air vehicle. 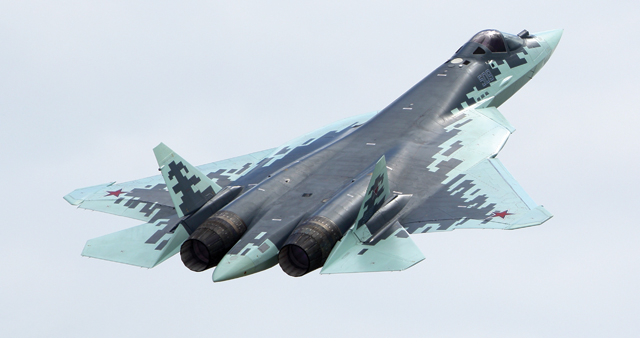 Typically, the DoD gives its stealth aircraft development to multibillion dollar prime contractors such as Boeing, Lockheed Martin or Northrop Grumman. But not in this case, as responsibility for this aircraft has fallen into the hands of a little-known aerospace start-up named Sierra Technical Services.

Empowering a small start-up is exactly the point, actually.

The “goal for the 5GAT effort, as a proof of concept, is to assess the ability to conduct a rapid prototyping and experimentation to enable the fielding of a low-cost, all composite, full-scale, unmanned target that delivers the requisite performance and mission capability at a fraction of the cost of current target programmes,” says the DOT&E. “The 5GAT contract award occurred in March 2017. Its maiden test flight is scheduled to occur only 26 months later, in May 2019.”

Indeed, the 5GAT will be the first aircraft Sierra Technical Services has ever built.

Nonetheless, the fact that a fledgling business is building a stealth aircraft is just another sign of the times, says Sierra president Roger Hayes. He co-founded the company with his wife Debra, after more than 20 years at Lockheed’s Skunk Works, where he worked as senior loftsman for the YF-22 and F-22 programmes.

“I believe the future of most military aircraft will focus on smaller aircraft that integrate many features of stealth technology – but possibly not all – while also trying to reduce cost,” he says. “The primary component for all new DoD aircraft programmes is cost. Large prime contractors cannot compete with most small businesses when it comes to cost and efficiency.”

Situated on the edge of the Mojave Desert in southern California, Sierra has set up shop in five repurposed hangars at Tehachapi Municipal airport. Besides a nearby corrugated steel shed used by Mike Melvill, the retired Scaled Composites pilot who became the first privtae astronaut in 2004 aboard SpaceShipOne, the company’s manufacturing presence in the mountain pass town is unusual.

Tehachapi is home to only 14,000 people, and there are better known aerospace hubs nearby: Mojave is 20 miles (32km) east; a trip to Lancaster and the US Air Force’s Plant 42 or Edwards AFB covers nearly 50 miles; and Skunk Works is 60 miles away, in Palmdale.

So growing from three employees to nearly 60 people over the past year and a half has forced Sierra to be scrappy in the way it recruits staff. Many of its engineers and workers are Tehachapi residents lured from the likes of Skunk Works and Northrop’s Mojave-based Scaled Composites, in part for the appeal of not having to drive across the desert to get to work every day.

Others come from unexpected places. Says Fred Schramm, engineering manager and chief engineer for the 5GAT programme: “One of our engineers was working at Pizza Hut and came in [looking for a laminating job]. And we were like, ‘Oh, why were you working at Pizza Hut?’ She said, ‘Well, I didn’t know this was in Tehachapi’. So, yeah, we have a pretty diverse crowd here.”

The engineering shop also maintains outside expertise by consulting with bored retirees, he adds: “We have another eight to 10 subject matter experts, what we call greybeards. These are predominately industry leaders in their respective engineering disciplines that have retired from mostly Skunk Works that we have on retainer that we use to help us to develop our designs.”

Sierra is also creative operationally. To keep costs low in the prototyping phase, says Schramm, the company is avoiding big upfront investments in tooling and fixtures: “A lot of it is 2 x 4s, bondo, hot glue and Popsicle sticks. We don’t spend $500,000 on an assembly fixture that possibly will have to be reworked, thrown away or scrapped.”

To be sure, the 5GAT is initially being built only for short-term demonstration purposes, which means Sierra can construct it using commercially available composites from Japanese carbonfibre manufacturer Toray Industries. “There are fasteners on this aircraft, but there are not hundreds of thousands of Hi-Loks holding the skin to the primary structure,” says Schramm. “If you look at a [Lockheed] F-22, they will put all of the exoskeleton together, stuff the airplane and then put skins on. We basically build out skins and put all of our primary structure into it. One of the reasons we can do that is because of the bonding process; because it is a glued-together plastic airplane.”

And, while subcontractors are developing the flight-control software, as well as hydraulic, fuel and electrical systems, Sierra is scavenging much of the rest of the 5GAT’s guts from old Northrop T-38s and F-5s, including landing gear and GE Aviation J85-5 engines. 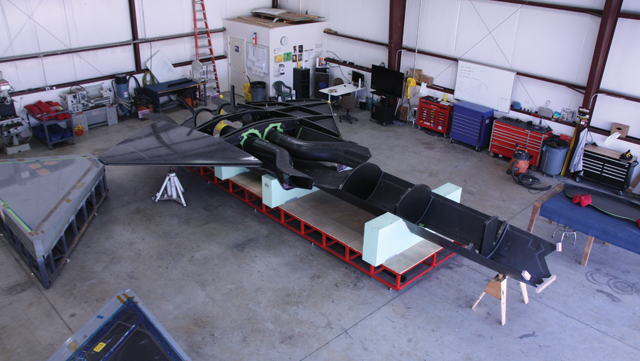 “We went out on the open market and purchased an F-5 to get the parts,” says Schramm. “We have a T-38 here that was [donated] from Sheppard AFB. I believe that one was a bird strike with structure damage. We basically got it and cannibalised it.”

Such methods are important to keep costs down, as the DOT&E is only paying Sierra $15.9 million to complete the 5GAT design and deliver the first article demonstrator through the initial flight tests. The US government has not committed to producing the stealth drone en masse, but may put a low-rate initial production contract up for competitive bidding after initial test flights.

Sierra is not guaranteed a production contract because the aircraft design is 100% owned by the US government. Thus far, the 5GAT effort has been led by the DOT&E with help from Sierra, cadets and instructors at the US Air Force Academy, and other government and industry contributors.

Still, Sierra is confident that it could win a production contract, given the firm’s familiarity with the aircraft’s design, says Glenn Amacher, vice-president and general manager.

“We’ve been asked by the government now to look at a low-rate initial production starting in the 2020 time frame, which would put out 23 or 25 [units] a year over a four- or five-year period,” says Amacher. “In production, I think we are targeting $5 to $7 million per unit.”

TRAIN FOR THE FIGHT

The 5GAT looks roughly similar to China’s J-20, though Sierra cautions that was not intentional. In fact, because the aircraft has no radar absorbent materials it gets all its stealth from its shape alone, a characteristic which may explain the resemblance.

The drone is about 12.2m (40ft) long and has a 7.3m wingspan, sitting less than a metre off the ground. It is designed to be launched and landed using a conventional runway, and has a maximum gross weight of 4,350kg (9,600lb) with full fuel.

“Max gross [weight] was supposed to be about 13,000lb,” says Amacher, noting the prototype is substantially underweight.

The USAF’s go-to aerial target today, the Lockheed/Boeing QF-16, is all about its 9g manoeuvrability and a supersonic top speed, but the 5GAT is all about stealth. Therefore, it is not likely to push the performance envelope, says Schramm.

“You’re not out there performing weaves,” he says. “You are straight and level at a certain speed so you’re giving off the least amount of signature.”

To maintain a low radar cross-section, the 5GAT also has reconfigured the inlet for its J85-5 engines.

“It is s-ducted, so there is no line of sight for the engine face,” says Schramm. “That’s interesting for an engine that was designed in the 1950s and really wasn’t meant to be s-ducted.”

Sierra declines to say what the 5GAT’s radar cross-section will be.

Whatever the result, the DOT&E acknowledges the stealth drone’s abilities could make it useful to the USAF beyond target practice – perhaps even in a combat role someday. Notably, Lockheed’s Have Raider programme has demonstrated the ability to convert a target drone, the QF-16, into a Loyal Wingman UAV.

“5GAT could be a potential candidate for a Loyal Wingman vehicle; however, it was not designed specifically to do so,” says the DOT&E.

Ultimately, combat applications aside, Larry Stutzriem, director of research with the Mitchell Institute think tank, emphasises that the first goal of the 5GAT is to sharpen the lethality of the USAF’s arsenal of missiles and improve pilot tactics in the face of new stealth aircraft threats. “Lessons of history, and the US experience in Vietnam, taught us that you fight the way you train. This is like a bedrock principle in the flying business. You train like crap, you fight like crap. If you train for the fight, you are going to do much better.”