Despite new regulations issued by President Donald Trump's administration in April 2018, loosening the rules that govern the export of drones to foreign militaries, industry analysts say unmanned aerial vehicle manufacturers still have their hands tied by regulations when it comes to marketing and selling their aircraft abroad.

US drone manufacturers have complained for years that foreign countries, especially Middle Eastern nations, were expressing interest in buying American-made UAVs, but were instead purchasing Chinese, Russian and Israeli drones in the face of US export restrictions.

To address those concerns, the Trump administration's new policies attempted to speed up the sales process for US manufacturers, allowing them to directly market armed drones to US allies and partners, eliminating the need to go through the State Department via the Foreign Military Sales process – a system that sometimes required buyers to make political concessions to the US.

Yet industry analysts and lobbyist say they remain disappointed by the lack of changes to the interpretation of the Missile Technology Control Regime, a voluntary international agreement that restricts the proliferation of cruise missiles and large drones capable of carrying nuclear weapons. Drones controlled by the MTCR are capable of delivering a payload of at least 500kg (1,102lb) with a range of at least 162nm (300km).

Their exportats are subject to a strong presumption of denial from the State Department. Such “Category 1” drones include the Northrop Grumman RQ-4 Global Hawk and General Atomics Aeronautical Systems Predator C Avenger. These UAVs have only been approved for export to US allies, with the recent exception being the approval of the sale of General Atomics MQ-9s to India.

The drone industry believes that without changes to the MTCR, access to foreign markets will remain restricted. 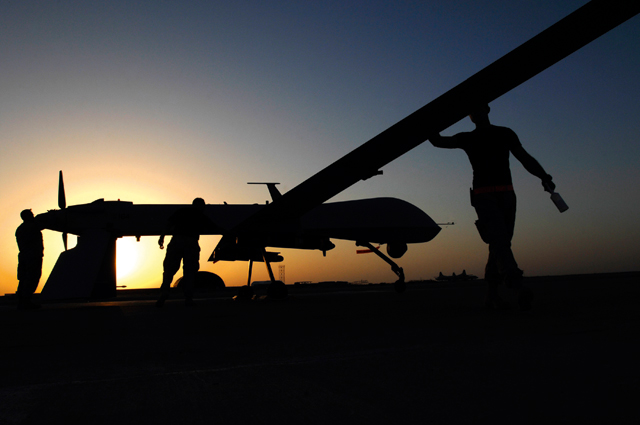 "The changes in the US UAS export policy are good ones, but you still have to make changes in how UAVs are treated in the MTCR to normalise the treatment of this technology and open up the marketplace fully," says Remy Nathan, vice-president of international affairs for the Aerospace Industries Association. "If you are imposing a strong presumption of denial, you are severely damaging companies in countries that are signatories of MTCR to compete in the global marketplace and innovate."

The export market for large UAVs has grown rapidly over the past decade and is expected to continue to grow for years to come. The estimated global military and commercial UAV market – for small and medium as well as large drones – is projected to grow from about $6 billion in 2015 to about $12 billion in 2025, according to research by the Stimson Center.

For years, the USA dominated the drone export market with a near monopoly. But in light of MTCR restrictions, as well as a reluctance by the Obama administration to sell armed drones to countries with poor human rights records or dubious allegiance to US foreign policy objectives, nations such as China, Russia and Israel have elbowed their way into the industry and grabbed a growing share of the market.

For example, Chengdu Aircraft Industry Group of China has exported its Wing Loong II drone – allegedly a copy of the GA-ASI MQ-1 Predator – to at least nine countries since 2011 including Egypt, Nigeria and Saudi Arabia, according to the RAND Corporation. The drone comes at a cheaper price than its American competitor – and without MTCR restrictions or commitments to US foreign policy goals, such as supporting democracy and human rights.

In light of an eroding market share, the Trump administration moved in April 2018 to help ease the drone export process for US manufacturers. "Providing our allies and partners with greater access to American arms will also reduce their reliance not just on Chinese knockoffs, but also on Russian systems, consistent with the Countering America’s Adversaries Through Sanctions Act," says Peter Navarro, assistant to the president for trade and manufacturing policy. "For too long we have hamstrung ourselves and limited our ability to provide our allies and partners with the defensive capabilities they require, even when in the US interest."

Many drone manufacturers had hoped the White House would relax the State Department’s interpretation of the MTCR. For example, in August 2017, after disclosing the potential sale of 90 Predator C Avengers to an undisclosed international customer, General Atomics chief executive Linden Blue urged the administration to take a more lax view of the MTCR. "That allows the executive branch to use judgment on MTCR-related decisions," he said. "Changing the MTCR, which is not a formal treaty, that will take longer and involve many countries."

FlightGlobal reached out to several drone manufactures for comment but all declined to speak, citing a wariness of upsetting the Trump administration. But industry analysts and lobbying groups say they see the MTCR as a remaining obstacle.

Yet, it may be a while before the US drone manufacturing industry sees export restrictions swept away. Surprisingly, the Trump administration has bucked industry pressure and its go-it-alone reputation to pursue an agreement between the 34 other members of the voluntary MTCR regime to reclassify how drones are treated under the agreement.

"To ensure that we are able to meet both the non-proliferation objectives at the heart of the MTCR and the rapid evolution in both UAS technology and its applications, the US government has submitted a proposal for consideration by MTCR partners for modernising MTCR controls on UAS and related technology," says the US State Department. "In addition to considering the feedback we receive from MTCR partners, we will continue to discuss and seek input and recommendations from US industry as we move forward with this effort."