Airbus A3 gave employees working on Project Vahana the day off on 2 February. The team had spent the previous two days on an unmanned air systems test range in Oregon marking the first and second test flights of Alpha One, the San Francisco-based rapid innovation cell’s concept for an electric-powered, vertical take-off and landing (eVTOL) aircraft.

For several months leading up to the flights, Vahana’s engineers had progressed through a slow series of small milestones, checking out the avionics, tilt-wing actuators and high-voltage systems in ground tests. After moving Alpha One to the test range, the team powered up the individual motors with the vehicle tethered to the test pad. But now that the vehicle has proven it can fly in a brief hover, the Vahana team’s rest will not last long.

A3 plans to complete flight testing of Alpha One by the end of this year, implying a long series of flight tests to confirm how the octorotor, tilt-wing prototype of a future air taxi for urban commuters performs at a range of speeds and cross-winds, and how it manoeuvres in the presence of other air traffic.

“Then we’ll start to evaluate in much more detail the core details of the aircraft to make it safer, more economical and overall like a well-polished product,” Lovering says.

It is tempting to question why Airbus is in such a rush. The first flight of a manned, electric-powered helicopter occurred less than seven years ago on 12 August 2011. French inventor Pascal Chrétien’s company Solution F demonstrated a hover out of ground effect with a spartan vehicle using a coaxial rotor for vertical lift.

By January 2016, Moore had joined Uber’s staff as the head of Project Elevate, which is seeking to catalyse investments by start-ups and aviation OEMs in a new class of eVTOL craft with distributed or compound propulsion systems that blur the boundaries between fixed- and rotary-winged flight.

It appears Uber’s ploy worked. A year after Moore was hired, the eVTOL category has mushroomed from a niche scientific curiosity into a full-fledged industrial movement. At least 55 different designs in some state of development now exist in the public domain, according to a pre-publication copy, dated 15 January, of a joint report by NASA and the American Helicopter Society on the readiness of eVTOL technology. The concepts span a wide variety of configurations, including flying cars, multicopters, lift and cruise vehicles, tilt-rotors, tilt-wings and compound helicopters.

The technology has attracted intense interest from the top OEMs. In addition to Airbus’ Project Vahana and CityAirbus concepts, Boeing has acquired Aurora Flight Sciences, which is developing an eVTOL vehicle. Bell Helicopter last month unveiled the passenger cabin of an eVTOL aircraft at CES, the popular consumer electronics show in Las Vegas. 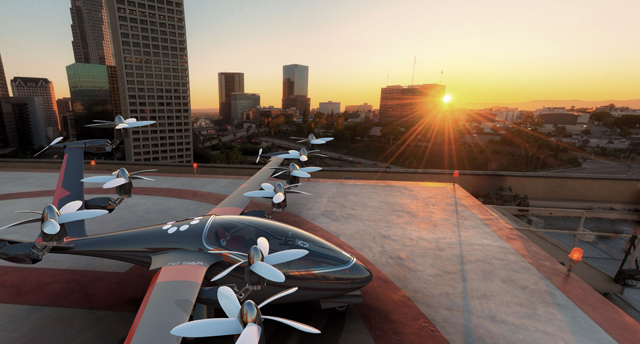 But traditional OEMs are just the tip of the iceberg. So far, the traditional barriers to entry for aviation start-ups have not deterred financial support for well-regarded eVTOL projects. A day after Airbus’ Alpha One prototype completed its first flight, California-based Joby Aviation announced that it had secured a $100 million Series B round to launch pre-production and certification of a five-seat, tiltrotor, eVTOL aircraft. The financing, which adds to a $30 million Series A round, was backed by several major investors including JetBlue Technology Ventures, Toyota AI Ventures and Singapore-based EDBI.

The barriers to introducing a new technology in the aviation business remain as high as ever. US and European regulators have never certificated an electric-powered aircraft, much less an eVTOL concept with a propulsion system that straddles the jurisdictional boundary between fixed-wing and rotary-wing. Even if the certification issues can be surmounted, the manufacturers must also persuade local authorities to accept the noise and safety implications posed by Uber’s vision of flocks of air taxis zooming over city skylines.

Despite those obstacles, dozens of start-ups and familiar OEMs remain undaunted. The young industry is driven by a convergence of advances in autonomy, battery power and distributed propulsion that make the economics of eVTOL seem inevitable.

“If it was exactly the same price as a helicopter then you could arguably justify the investment,” Airbus’ Lovering says. “But our goal is to do much better than that. We believe we can do it for half or more of the cost of [helicopter] operations.”

That is a bold claim for a new technology. Helicopters have been in service for more than 70 years, with technology advancing in recent decades to elastomeric hubs and rigid rotors.

But a growing body of research supports the argument that eVTOL can perform the on-demand urban taxi mission for a fraction of helicopter costs.

Researchers at the Massachusetts Institute of Technology (MIT) have also looked into the issue, in January publishing even more optimistic findings in a 48-page study titled “A Vehicle Design and Optimization Model for On-Demand Aviation”.

The study compared how four different eVTOL configurations – a compound helicopter, lift and cruise, tiltwing and tiltrotor – compare with a conventional helicopter on a route between Manhattan and New York JFK airport.

“On-demand electric air service will cost significantly less to operate than an equivalent helicopter service," the MIT paper says. "The compound helicopter, the most expensive of the configurations, costs approximately $55 per passenger for an overwater flight. For comparison, New York Helicopter quotes a price of $1,900 per airport transfer, or $875 per passenger for a two-passenger trip.

“An order-of-magnitude cost reduction illustrates that on-demand aviation has the potential to supplant existing services,” it adds.

The MIT researchers found that cost savings would improve as new technologies became available, such as lithium-sulphur batteries, and as regulators allowed more autonomous functions, including unpiloted deadhead flights.

“In the case of the compound helicopter (the most expensive configuration), cost per seat mile decreases from almost $3.50 per mile initially, to as little as $0.60 per mile in the long term,” the paper concludes. “For comparison, the average prices of UberX (car ridesharing, where the ride is paid for by one passenger) and UberPool (in which the ride is shared between multiple paying passengers) rides in the United States in 2016 were $2.34 per mile and $1.38 per mile, respectively.”

The MIT paper confirms the economic interest in using eVTOL aircraft for air taxis, but it also identifies a potentially crippling technical flaw in the concept. In order for air taxis to be accepted, Uber's 2016 report predicted that such aircraft, in a hover at 500ft, would need to create no more sound than a Toyota Prius. According to MIT's researchers, eVTOL aircraft will create twice as much noise under the most optimistic assumptions.

"Vehicle noise is therefore a critical issue for on-demand aviation," the report concludes.