Twenty years after the first flight of a production aircraft on 7 September 1997, the Lockheed Martin F-22 Raptor remains unchallenged as the world’s top air superiority fighter. Remarkably, the F-22 dominates despite some startling gaps in its arsenal which are only now being addressed as the US Air Force looks to keep it relevant beyond 2060.

Nothing in the air seemed remotely comparable when the F-22 first flew over Marietta, Georgia, two decades ago, but the Raptor quickly inspired imitators. Russia unveiled the less stealthy but super-agile Sukhoi Su-57 – formerly identified as the T-50 – in 2010, featuring internal weapons bays and a multi-axis thrust vectoring system. In 2011, China finally revealed the AVIC Chengdu J-20, with a nose and engine inlets resembling the Raptor’s. Meanwhile, in Germany, India, Japan, South Korea and Turkey fifth-generation fighters are moving from drawing boards into early development stages.

Still, no aircraft in production or development yet combines the three capabilities that make the F-22 stand out. Powerful Pratt & Whitney F119 engines can vector jet exhaust in the pitch axis and take it to Mach 1.5 without afterburners for more range. Integrated avionics fuse data from the Northrop Grumman APG-77 radar and BAE Systems ALR-74 electronic warfare suite on to a common display, including inputs from the same sensors on other F-22s via the intraflight data link. Finally, radiation absorbent materials and a stealthy airframe design – featuring leading edges of the wings and horizontal tails set at the same angle – that make the F-22 still the hardest combat jet to track on radar.

Newer aircraft designs, including the Lockheed F-35, boast one or even two of these qualities, but none owns the F-22’s unique package of all three.

“After 20 years, the F-22 still rules the sky,” Air Combat Command (ACC) chief Gen Mike Holmes tells FlightGlobal in an emailed statement. “Continuous updates and dedicated training have maintained that edge, but our adversaries are hard at work to close the gap. Future deterrence will depend on developing new ways to maintain America’s air advantage.”

Despite that unequalled performance package, the F-22 achieved initial operational capability in December 2005 missing some capabilities – a helmet-mounted cueing system (HMCS) and infrared search and track (IRST) sensor – that even a decade ago counted as standard equipment for a modern fighter. As Lockheed delivered the last of 195 F-22s in May 2012, those gaps remained unaddressed, even as other USAF and US Navy fighters, including Boeing’s F-15C and F/A-18E/F Super Hornet, stood ahead of the F-22 in the queue to receive the US military’s most advanced air-to-air missiles: Raytheon’s extended-range AIM-120D AMRAAM and back-flipping AIM-9X Block II Sidewinder. 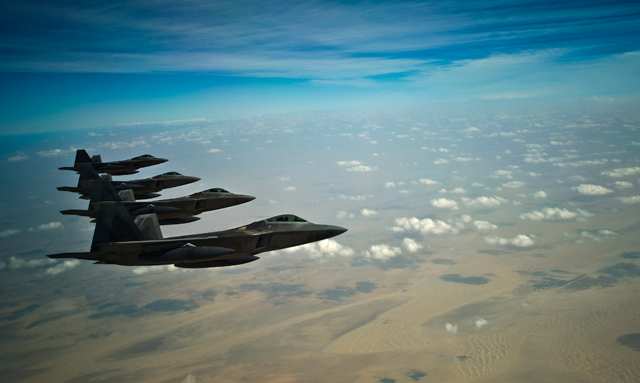 But the F-22’s time is coming. Initial operational test and evaluation began in August on Increment 3.2B, a software upgrade that will finally add the AIM-120D and AIM-9X Block II to its weapons stations, the F-22 programme office confirms to FlightGlobal. Increment 3.2B also improves the ALR-74’s ability to geolocate targets accurately based on their electromagnetic emissions. The current schedule calls for wrapping up testing by next April, then beginning installations on 150 F-22s from mid-2019 to autumn 2022.

As Increment 3.2B installations begin, the F-22 programme office plans to address more gaps in the F-22’s technology. As of now, adding a potentially radar signature-compromising IRST sensor to detect engine exhaust heat from other aircraft is not on the priority list. When asked about an IRST upgrade, the programme office responds: “No new requirements or technology solutions have been determined or finalised at this time.”

A funded requirement exists, however, to add an HMCS to the F-22, allowing pilots to select targets by turning their heads rather than the aircraft’s nose. Adding the AIM-9X Block II in mid-2019 would be compromised by the lack of such technology, as the F-22 would be unable to exploit the weapon’s full capabilities without helmet-mounted cueing. The USAF came close to funding an HMCS upgrade in 2013, but budget cuts stopped the effort.

“Updated HMCS capability requirements will be developed and finalised in 2018 in preparation for a pre-engineering and manufacturing development programme start in early 2019,” the programme office says.

The final decision for selecting the HMCS could be delegated to the F-22’s prime contractor, according to Lockheed.

“As product support integrator for the F-22, Lockheed Martin would be tasked by the air force’s F-22 system programme office to run the competition, evaluate the various products submitted, select the winning design, develop all of the requisite integration for the new system, and ultimately install all of the software and hardware modifications required to add the new capability to the aircraft,” the company tells FlightGlobal.

After Increment 3.2B and HMCS upgrades are completed, the F-22 will continue operating for decades. The F-35A achieved initial operational capability last year and now the USAF is studying how to field a “penetrating counter-air” (PCA) system by 2030, but the F-22 should remain in operation for decades to come. The last F-22 is currently planned to be retired after 2060, the ACC says.

Keeping the aircraft relevant in combat for the next 45 years is the USAF’s next challenge with the F-22 fleet. As the aircraft approaches a 20-year anniversary of operational service in 2025, the USAF will be looking to launch a potentially wide-ranging refresh of avionics, sensors and weapons.

“The F-22 will not require any major structural upgrades to operate out to [2060] and Air Combat Command has a notional plan for an F-22 mid-life update [MLU] around the 2024 timeframe,” Lockheed tells FlightGlobal. The USAF releases long-term budget plans in six-year increments, so no such requirement appears in the most recent spending roadmap.

The ACC confirms, however, that an MLU for the F-22 is possible within a decade.

“We are in the beginning stages of looking at mid-life upgrade options,” the ACC says. “They will likely entail computer hardware, avionics and sensors, along with a detailed analysis of the supportability of the systems and sub-systems.”

Of course, the PCA programme is likely to draw on multiple research and technology efforts under way by industry and the Air Force Research Laboratory, including adaptive cycle engines, directed energy weapons and so-called sixth-generation missiles. How such technologies will be applied to the ­USAF’s existing stealth fleet, including the F-35A and F-22, remain to be seen. So far, the service has made no commitments.

Incorporating such technologies in the F-22 implies extensive design changes. Some concepts for sixth-generation missiles incorporate MBDA Meteor-style variable-flow ducted rockets (VFDR), for example, with significantly wider missile body diameters than the tightly packed, six AIM-120s inside the F-22’s weapons bay. But the USAF remains open to any changes that the ACC requires.

“Should the air force choose to pursue this requirement and its integration on to the F-22, the [system programme office] would follow our standard process for integrating new weapons capabilities on to the airframe, to include VFDR technology accommodation, if appropriate,” the programme office says.

The F-22’s sensors allow it to play a role that USAF officials have likened to an American football quarterback, designating targets and directing other aircraft in to strike. 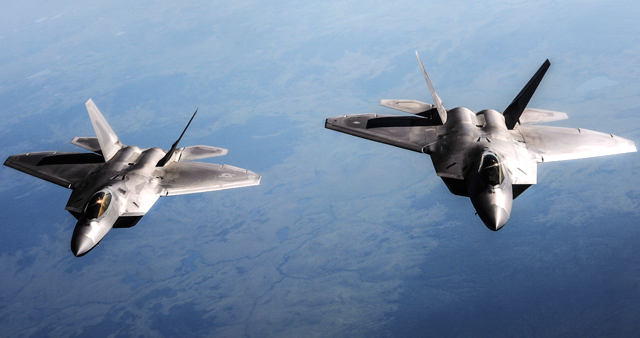 The F-22’s prowess in the air-to-ground role comes from a historically circuitous legacy. The programme that led to the F-22 actually started in the early 1970s as studies for a new aircraft to replace the Republic F-105 and General Dynamics F-111 – two masters of intermediate-range strike. But the early studies evolved as the Soviet Union introduced the Su-27 and RAC MiG-29 to counter the F-15 and Lockheed F-16. The USAF diverted the strike mission to the stealthy Lockheed F-117 and the F-15E, while the advanced tactical fighter programme concentrated on developing a dominant air superiority fighter.

A decade after the USAF selected the F-22 in 1991, however, the programme faced a budgetary crisis. In a relatively lean era for defence spending, Congress mandated a buy-to-budget strategy for the F-22 programme, which meant any increases in development costs had to be funded by debits to the production accounts. That legal constraint set up a downward spiral of rising costs and declining quantities, as the programme of record contracted from 750 aircraft in 1991 to 341 a decade later. By 2002, a new Defense Planning Guidance recommended cutting production to 180. In response, USAF leaders – then-secretary of the air force James Roche and chief of staff Gen John Jumper – reintroduced the Raptor as the “F/A-22”.

This newly dual-role aircraft would receive billions of dollars of new investment to add a capability to carry eight GBU-39s internally and a ground moving target indicator mode to the APG-77. Those capabilities made the F-22 more relevant in operations over Syria, but in 2004 it was not enough to spare the programme from further budget cutbacks. In a sweeping cost reduction plan outlined in a 23 December 2004 memorandum called PBD 753, the then-defence secretary, Donald Rumsfeld, cut F-22 production to 183, nearly matching the 180 units recommended in the 2002 guidance document, with a few units tacked on to maintain full-rate production on the final assembly line.

Today, the F-22 production fleet still stands at 183 aircraft, despite three aircraft lost to crashes throughout the history of the programme. That number includes 137 combat-coded F-22s, 15 test aircraft and 31 training aircraft.

Twenty years after first flight, it is fleet size – more than any lack of weapon or sensor capability – that is the F-22’s biggest combat limitation. In 2012, Lockheed carefully placed each piece of production tooling in storage, with video recordings of machinists explaining how each part of the F-22 comes together. But any hope of restarting production has faded. The USAF concluded three months ago that such a move was unaffordable, at $50 billion to build 194 more F-22s.

Instead, the USAF is making do with existing resources. The single F-22 kept in flyable storage is now being upgraded to return to service as a test aircraft, raising that portion of the fleet to 16 aircraft. In addition to 137 combat-coded F-22s upgraded to Block 30/35 aircraft, 13 of the Block 20 F-22s used for training and testing are being upgraded to the more capable Block 30/35 standard. The last three Block 30/35 conversions will be complete by the end of the year, according to the ACC.