ANALYSIS: F-35's next engine to reach for more range

One criticism – among many – of the Lockheed Martin F-35 Lightning II is that the fighter lacks the range needed to conduct long-range stealth strike missions. While Lockheed Martin has studied adding external fuel tanks to extend the aircraft’s range, slinging the bulky hardware under the F-35 would ruin its minimal radar cross section, giving away the stealth fighter’s chief advantage. 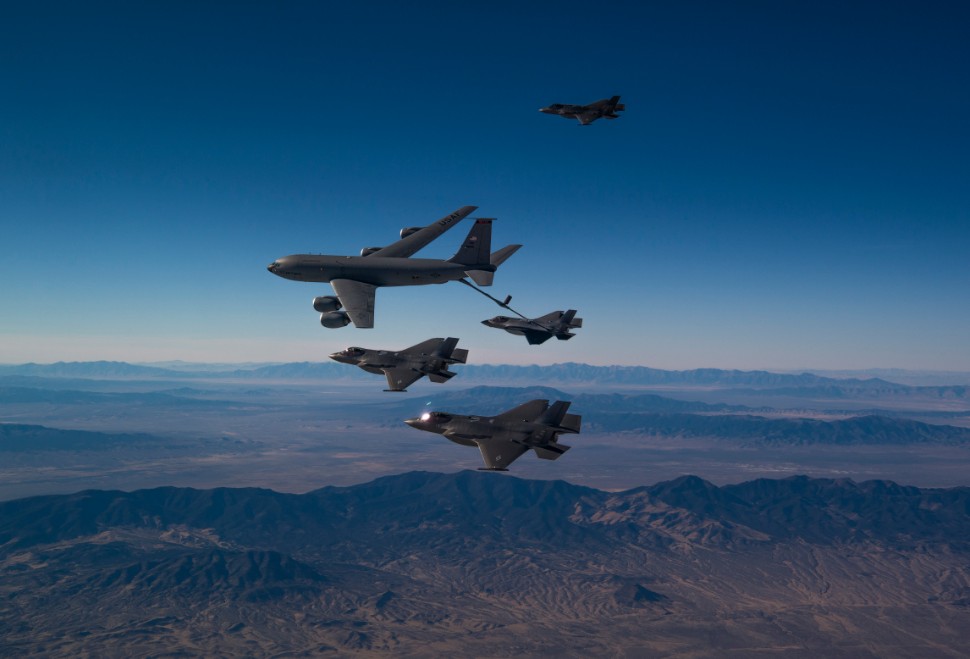 Still, the F-35’s range handicap remains particularly dangerous for hypothetical combat operations against mainland China – shorter endurance might mean that air bases, in-flight refuelling tankers and aircraft carriers have to be deployed within the threat envelope of Chinese defences. In addition, it reduces the number of potential bases from which the F-35 can operate effectively.

The USAF is looking at how the F-35 can do more with its fuel capacity. One important effort is the service’s Adaptive Engine Transition Program, which aims to create a novel engine that has not only more power, but also more fuel economy.

Adaptive engines work by varying the volume of air flow that bypasses the turbine core by opening a third stream when flying in cruise mode. This third flow – in addition to core flow and bypass flow – increases the engine’s efficiency in producing thrust and also creates a new heat sink within the engine, allowing for further fuel efficiency gains from increased core temperature. The result is an engine that can play the turbofan’s efficiency trick of running a large bypass ratio when cruising – while retaining the raw power of a turbojet in other situations.

The concept is not unique to the F-35 programme. As revealed at this summer’s Paris air show, Eurofighter Typhoon is researching an enhanced Rolls-Royce EJ200 engine to improve thrust, range and persistence using “adaptive power and cooling techniques”.

The USAF believes adaptive engines could provide 25% improved fuel efficiency, 10% increased thrust, and significantly improved thermal management. GE Aviation and Pratt & Whitney (P&W) were each awarded contracts worth $1 billion in 2016 to develop adaptive engine demonstrators by September 2021. GE Aviation is developing the XA100 demonstrator and P&W the XA101 demonstrator. If the programme is successful, the F-35’s P&W F135 engine could be swapped out for one of the new adaptive units in the mid-2020s.

For its part, GE Aviation announced the successful completion of the XA100 detailed design process in February 2019. The company believes the engine could result in a 35% increase in range and a 50% improvement in loiter time. That range improvement applied to the F-35C would add 420nm – taking range for the USN’s variant to 1,620nm.

“In the Pacific theatre of operations this is significant, allowing either operations from greater distances or more time to operate at the combat edge,” says USAF Major General Larry Stutzriem (retired), now director of research with the Mitchell Institute for Aerospace Studies. “This improvement could also allow F-35s to drop from their tanker support earlier, keeping those extremely vulnerable aircraft further away from adversary defences.”

“With respect to improved thrust, there is nothing the F-35 will be enabled to do that it can’t do now,” says Stutzriem. “That said, many operating features will improve with additional thrust. For example, take-off roll can decrease marginally with additional thrust, and that has positive benefits.”

Ultimately, the addition of an adaptive engine could make the stealth fighter more lethal if it extended its range. However, extra range would be unusable if it comes at the cost of the aircraft’s mission capability rate, an area where the F-35 already struggles.

“An important aspect of the adaptive engine design involves reliability and sustainability,” says Stutzriem. “The threat environment involving peer competitors demands an increase, not a decrease in overall reliability and availability of engine components.”