Fastjet’s disclosure on 20 September that it will relocate its headquarters from London Gatwick to Johannesburg came as something of a surprise, given that the airline primarily operates out of Tanzania.

Speaking to FlightGlobal that day, Fastjet chief executive Nico Bezuidenhout said he'd picked the South African city over Dar es Salaam and Harare because South Africa is not only the airline's largest international destination from its core markets of Tanzania and Zimbabwe, but also the best recruitment ground for the IT, engineering and management skills it requires.

But when asked if his decision to pick Johannesburg was taken with an eye on the strict ownership laws that would apply should he wish to start a domestic operation in South Africa, Bezuidenhout had an interesting response.

"I think it [the ownership restriction] was a consideration, yes. Johannesburg is likely to be a growth market going forward. South Africa remains the largest short-haul market in Africa so we cannot continue to ignore growth into South Africa."

Bezuidenhout says his immediate priority is to stabilise Fastjet following a doubling in first-half losses, but outlines future expansion plans that include a "local operation" in South Africa. "Thereafter, [we can see] what West Africa has to offer," he adds.

The airline has tried several times to start a South African domestic business, without success.

An attempt to acquire defunct operator 1time in 2012-13 failed when Fastjet fell foul of South Africa's ownership regulations, which limit foreign companies to a 25% stake in a domestic airline.

The airline then tried to start services in partnership with South African investment company Blockbuster, with the objective of starting services by the end of May 2013. This too came to nothing.

Despite these failures, another attempt to enter the domestic South African market could still be logical next step for the pan-African carrier once it rectifies its financial woes.

The carrier already operates into the country from Zimbabwe and Tanzania to Johannesburg, where it could expand its footprint. South Africa is the continent's largest domestic market, and one well-accustomed to the low-cost model, which would seem to make it a natural fit for Fastjet. And loss-making national carrier South African Airways has been retrenching and cutting back on its network over recent years, so may not have the resources or appetite for a battle with a new domestic competitor.

Hence, he will have deep insight into the dynamics of the market. But he will also be mindful of the pitfalls.

The grounding of Skywise in December 2015, after less than a year of operation, highlighted the competitive challenges.

Flights were halted after the Airports Company South Africa imposed a ban on operations from its gateways following a dispute over unpaid fees.

Skywise had faced strong competition from other airlines on the route, with SAA, Comair and FlySafair operating rival services. It recently said it was in advanced talks with investors to retake to the skies but has not detailed a specific date for this to happen.

SAA and its franchise partners Airlink, SA Express and Mango make up a combined 53% of the available seat capacity in a given month, or 910,000 available seats.

Behind them comes British Airways and its franchise partners Comair and Kulula. Together they make up 34% of the market with a combined 894,000 available seats.

The rest of the market is divided among much smaller players, with FlySafair holding under 10% and Fly Blue Crane and CemAir smaller shares as niche operators. 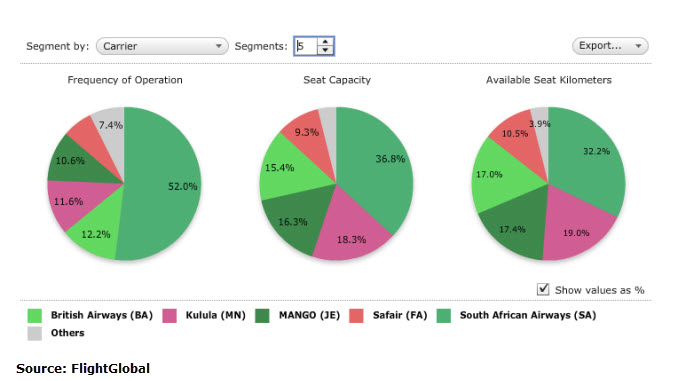 Fly Blue Crane is the newest airline in the market.

The carrier might be small but it is happy with its niche operation, chief commercial officer Theunis Potgieter explains.

"Second market is where we will remain," he says, adding that Fly Blue Crane seeks to avoid competing with the country's low-cost carriers and instead focuses on thin routes it can operate with its regional aircraft.

Despite press reports about "price wars" erupting in the South African market following the arrival of Skywise, Potgieter downplays the impact of new entrants to the domestic market in recent years.

"Generally speaking, there has not much growth in capacity in the domestic South African market. The only carrier that has made a difference is Safair on the domestic market, which has had a positive influence on average fares for the consumer."

Overall, he says, historical domestic capacity "has been flat", which had pushed up fares. This does not mean there are opportunities for new entrants to come in and undercut the market, however.

Potgieter says the number of market opportunities in South Africa is "limited" and that many of its primary markets are already "saturated".

Fly Blue Crane sees more opportunities outside of the domestic sphere. Potgieter says the Johannesburg-based carrier has set its sights on international markets such as Angola, Swaziland, Zambia and Zimbabwe.

The carrier has also applied for route rights to operate to Maputo in Mozambique and hopes to begin operations to the country later this year.

CemAir, which is primarily an ACMI operator, is currently exploring the potential to open up new domestic markets in South Africa.

The airline, like Fly Blue Crane, avoids competing with the bigger players on trunk routes and elects to operate thin routes where it faces little or no opposition.

Using a fleet of Bombardier CRJ100 and CRJ200 jets and Dash 8/Q100 and Q300 turboprops, the airline operates routes such as Cape Town-Plettenberg and Johannesburg-Margate.

Chief financial officer Laura van der Molen says the domestic operator is interested in opening up routes to cities that do not currently have scheduled services, for example Grahamstown's airfield.

The majority of CemAir's passenger traffic are leisure customers, which creates a "seasonal flow" across its network, van der Molen says. "We are also seeing people moving from the larger cities to the coast and commuting to work using our services," she adds.

Van der Molen says there are other operationally limited South African airfields to which CemAir could operate, but notes that it is essential that the carrier establish a good "working relationship" with the municipality that owns the facility.

The prospects for consolidation in the South African domestic market seem to have risen this year on news that the government is keen to either merge SAA, SA Express and Mango in an attempt to reduce the flag carrier's losses.

As part of a new financial guarantee on state-owned SAA's debts, the airline board has accepted the need to look at a merger and also partial privatisation.

Domestic carrier FlySafair made a public offer to take Mango off the government's hands for the "right price". So far, the offer has not led to anything concrete.

Also this year, Comair disclosed it was in talks regarding the acquisition of an undisclosed company, but the airline later shelved out the idea.

Potgieter says the prospects for consolidation are limited and that it would likely take the form of internal mergers within the existing SAA and BA-led groups.

While Bezuidenhout hints that headquartering Fastjet's operations in South Africa may help the carrier start domestic operations at a point in the future, the national ownership and control rules could remain a barrier.

In an earlier interview with FlightGlobal, FastJet's chief commercial officer Richard Bodin described South Africa's restrictions on foreign ownership as a "significant hurdle" for the carrier's entry into the market.

For now, Bezuidenhout's immediate attention will be on stabilising the Tanzanian and Zimbabwean operations, but it seems likely that the prospect of opening a new operation in South Africa will likely continue to tempt him.