The airline fleet in Latin America (including Central America and the Caribbean) has averaged 2% annual growth over the past 20 years and its 2,100 strong fleet is now 7% of the global total.

FlightGlobal forecasts that the fleet will grow faster, by 4.2% annually, over the next 20 years, which will lead to almost 2,600 additional aircraft and take the fleet to just over 4,600, increasing its share to 9% of the global total. Although the ALTA region has recently been suffering from Brazil’s recession and the economic problems in Venezuela, longer-term growth prospects are strong.

Some 92% of the fleet is used in the passenger market and 8% is for carrying cargo. This share will change to a reduced 4% cargo share by 2036, as growth in available belly space is faster than the need for main deck freighters.

Latin America’s airlines have seen a significant increase in deliveries in the past five years, with 670 deliveries for replacement and low-cost-carrier growth. Deliveries fell in 2016 and are forecast to remain low in 2017 but once the short-term downturn in some markets is overcome, the region is forecast to increase its rate of deliveries, averaging more than 180 a year through the 2020s and increasing to almost 300 a year by the end of the forecast period. Overall, about 4,120 new aircraft are forecast for delivery in the next 20 years, a 9% share of global deliveries and with a value of $227 billion.

This includes 3,825 passenger jets, 275 passenger turboprops and 20 freighters. The jet total includes more than 2,695 passenger single-aisle types and 360 twin-aisle types, as well as 770 regional jets. About 78% of the current fleet will be replaced, with almost 60% of deliveries for growth purposes.

Latin America’s fleet is predicted to remain focused on single-aisles over the forecast, with a current 50% share of the total fleet rising to 60% by 2037. Regional jets will increase their share by 4 points to 18% and twin-aisle types will rise one point to 8% of the fleet. The freighter fleet will also increase slightly but its share will fall to 4% of the total, and the turboprop fleet share is expected to decline from 21% to 11% as the overall fleet has low growth.

The region is one of the key areas for future passenger growth, with increasing leisure traffic stimulated by low-cost airlines and continued liberalisation in major markets. Brazil and Mexico have some 40% of the fleet and will lead fleet expansion. 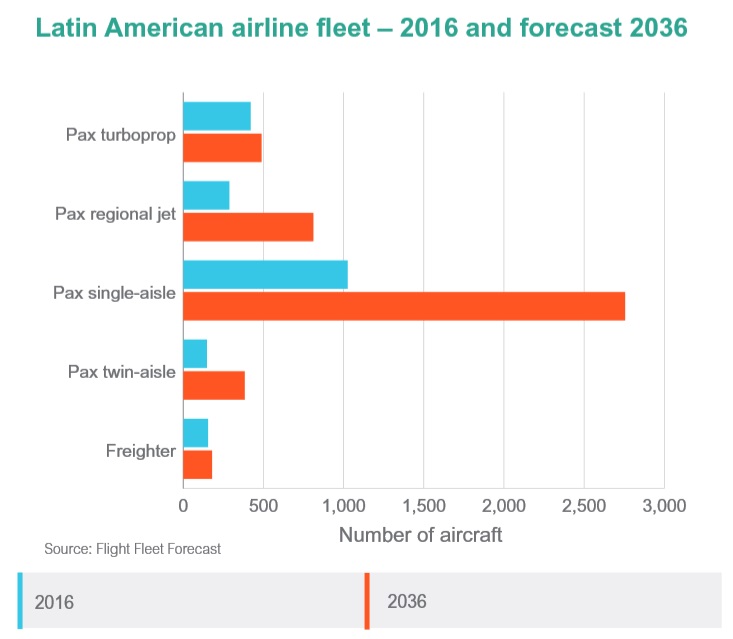 Low-cost airline growth, which began in Brazil, has spread to other countries, with low fares stimulating traffic away from buses. Airline groups such as LATAM and Avianca are also aiding fleet expansion in smaller countries across the region. The passenger jet fleet is predicted to grow by 5.1% annually over 20 years to 3,950 aircraft.

Flight Ascend Consultancy forecasts some 770 new regional jet deliveries, increasing the fleet to more than 800 by 2036.

Some 65% of the new deliveries are forecast to be single-aisle jets, with these 2,695 aircraft taking the fleet to 2,750 by 2036. The LCCs will be the key drivers of single-aisle deliveries throughout the forecast period.

The twin-aisle passenger jet fleet of 150 is forecast to grow by 4.9% per year to some 385, with 350 new deliveries (more than a third for replacement).

The forecast is for 275 passenger turboprop deliveries over the next 20 years, with the fleet initially remaining stable and then growing slightly from 420 today to 490. The freighter fleet is forecast to grow by just under 1% annually to reach 180 aircraft by 2036, with 22 new deliveries and 134 conversions enabling 85% of the current fleet to be replaced.

More information about Flight Fleet Forecast and our 2017 report summary is available at: flightglobal.com/FleetForecast