The first flight of the Airbus A319neo in March marked the beginning of the end of a flight-test programme that has already lasted almost 36 months and will ultimately culminate in six new A320-family variants being cleared for service.

The programme began on 25 September 2014 with the first flight of the Pratt & Whitney PW1100G-powered A320neo from Airbus's Toulouse plant and is due to conclude next year when testing of the two A319neo variants is completed. Five of the six Neo versions have now flown and overall, the test programme has accumulated more than 4,000 flight-hours. 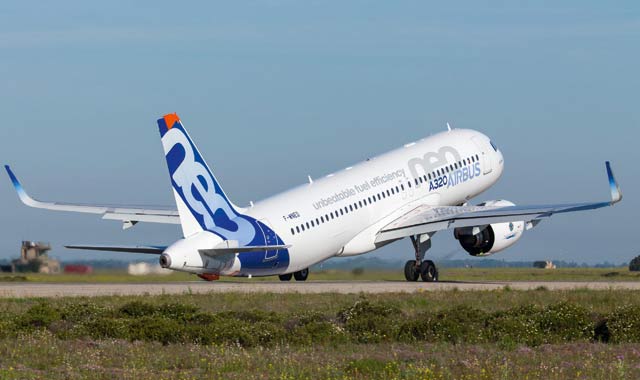 Minimum lift-off speed trials need two pilots in control – and a long runway with clear skies downrange, as at Istres, in France

A key milestone was reached in January 2016 when Airbus handed over the first A320neo – again Pratt-powered – to Lufthansa (after original launch customer Qatar Airways rejected delivery because of ongoing engine issues). Deliveries of A321neos begin in April this year, when Virgin America took its first CFM International Leap-powered aircraft.

Airbus has kept to a bare minimum the changes to the A320neo family from the 30-year-old A320ceo (current engine option) variants. The key changes are the replacement of the legacy family's CFM56 and International Aero Engines V2500 engines with Pratt's geared-turbofan PW1000G series and CFM's all-new Leap powerplant, and associated local strengthening. The cockpit and other key systems have been left pretty much alone, ensuring a high level of commonality with the installed fleet of A320ceos, which numbers some 7,000 aircraft.

But these limited changes did not mitigate the A320neo flight-test effort given that the powerplant changes affect performance and that there are so many iterations to trial.

"It was a quite difficult task for the teams if you consider that we have three different aircraft types – A319, A320 and A321 – and they are both offered with two different engines – Pratt & Whitney and CFM," says Sandra Bour-Schaeffer, head of single-aisle development flight-test within Airbus's engineering flight-test division.

"Although there is 95% commonality between Ceo and Neo, small modifications had a huge impact on flight test because they amount to 75% of what we would do on a brand-new aircraft as [the changes] have an impact on handling qualities, performance and system integration."

The re-engining meant that Airbus needed to retune all the A320's fly-by-wire (FBW) flight-control computers, as well as deal with the latest certification requirements that have evolved since the original A320 was approved in 1988. 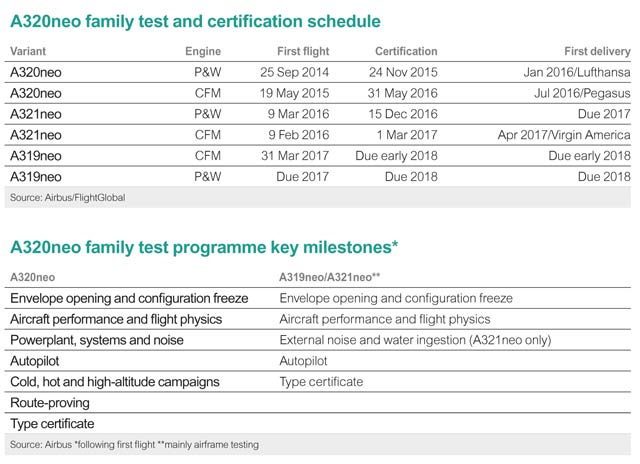 Bour-Schaeffer explains that replacement of the old engines with the Neo's more efficient powerplants results in a 1.8t weight increase, which Airbus has overcome from an operational performance perspective. "We wanted to develop exactly the same take-off and landing performance or even better than on the Ceo. So we couldn't stay with what we had on the classical A320 and, for example, for take-off had to go to a rotation control law which allowed us to cope with the weight increase and to meet today's regulations."

The changes meant that Airbus adjusted the flap and slat angles from those of the Ceo and increased rudder deflection by 5° to cope with the higher thrust. The A321 remains the odd one out, retaining its double-slotted flaps in place of single-slotted items on A319/A320.

For the flight-test programme, Airbus decided to tackle all the engine-related tests from a certification perspective on the two A320neo test aircraft, which were the first Neo examples to begin testing.

"So we tested up to the 33,000lb-thrust [147kN] rating on the A320 to complete the whole certification exercise from the engine point of view," Bour-Schaeffer says. "So when we moved to the A321neo and A319neo, it was only the integration of that engine to the airplane [that was tested]."

Bour-Schaeffer adds that Airbus only had to demonstrate the water-ingestion test to the authorities for the A321neo, as it wasn't necessary for the A319/A320neo.

The Pratt & Whitney-powered A320/A321neo test programme accumulated over 2,250 flight-test hours, while the CFM versions (including the A319neo) have covered over 1,770 flight test hours so far.

One of the key tests flown is the flutter campaign, during which control frequencies are put into the aircraft to evaluate the structural response of the wings and airframe. Airbus achieves this by programming the fly-by-wire computers, rather than using traditional oscillating vanes on the wing-tips.

"The target is to demonstrate that the damping of the structure is sufficient in all configurations. We inject solicitations on our surfaces – ailerons, elevator and rudder – and we have oscillations," says Bour-Schaeffer. 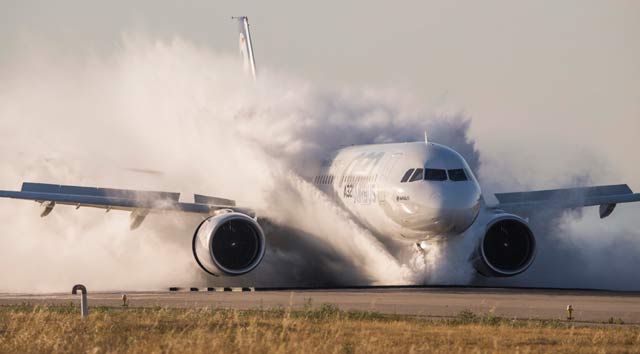 Water-ingestion tests were demanded for the A321neo, but not its smaller siblings

"Either it's a 3min sweep where we go through all kinds of frequencies, or we have pulses which are direct 200-500milisecond injections on the control surfaces, and we look for the response of the aircraft."

These tests are progressively carried out at various speed values across the operating speed range, for example from the A320's Mmo (maximum operating Mach number) of M0.82 all the way up to Vd (dive speed).

"The only physical issue we discovered in the A320neo flutter campaign was vibration around the [reverser] cascade at the junction with the pylon which on the first test went into oscillation."

The A320neo was flown to Keflavik in Iceland to enable trials in crosswinds as high as 38kt, where landing "decrab" manoeuvres were successfully demonstrated. "Keflavik has two runways at 90° which always produces a cross-wind," says Bour-Schaeffer.

However for the A321neo crosswind trials, runway work at Keflavik meant Airbus "ended up at Stornoway in Scotland". This brought challenges as the Stornoway taxiways could not take the A321neo so the aircraft had to backtrack on the runway between each landing and take-off.

One trial that often produces spectacular pictures is the Vmu test when the aircraft's rear fuselage is deliberately dragged along the ground to determine the minimum speed at which it will lift off.

"The climb rate during these tests is really, really low – 100-150ft/min – and we usually go to Istres [in France] as it has a very long runway and there is nothing after the runway so you have several kilometres where you can be at low altitude," explains Bour-Schaeffer.

During these trials, for maximum safety oversight each test pilot is allocated one dedicated control task. "There is one pilot flying the pitch and the other flying initially the rudder and once airborne, the roll. This aids situational awareness," says Etienne Miche de Malleray, Airbus experimental test pilot and head of flight-test product design. 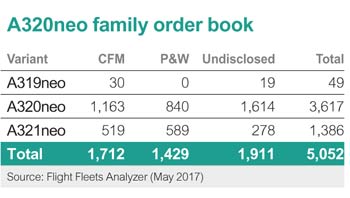 "The pilot flying the lateral has the safety role, in case something goes wrong – let's say not getting out of ground effect – then he can decide to cancel the test and apply some power."

During the take-off roll, the crew applies full back-stick at Vnmu (the minimum speed at which the nose can be raised) – typically around 80kt, says Miche de Malleray. Then the task is to keep the tail-bumper on the runway for at least 50% of the time until the aircraft lifts off.

The A320neo V speeds are actually lower than those on the A320ceo, due to lower Vmu and a new rotation control law introduced on the Neo variants. "This enables us to offer very good take-off performance," says Miche de Malleray.

The Neo's increased rudder deflection, along with a new "Vmcg law", has also helped decrease the re-engined variants' minimum control-speed values. All A320neo variants also have a new tail-strike protection system built into the control law which is only valid for take-off.

Neo sales have probably exceeded even Airbus's wildest expectations, having surpassed 5,000 orders since programme launch in December 2010. But as the accompanying table illustrates, the popularity is not evenly spread. The A319neo versions are struggling to gain market traction, having secured less than 50 orders.

Despite that, Airbus officially remains committed to its smallest Neo variant, and is working towards certification next year. Speaking earlier in 2017, Airbus chief operating officer for customers John Leahy stressed that the company would "definitely" produce the aircraft, but acknowledged that it had become a lower priority.

"If you're supply-constrained, you don't want to take a valuable delivery slot with an A319 if you can make it an A321," Leahy said, claiming interest in the A319neo from sectors such as the VIP market.

So with four of the six variants now cleared for service and over 110 Neos delivered, Airbus is cruising towards the end of its latest single-aisle test programme. The challenge now is to manage the continued production ramp-up to ship that huge order backlog to customers, and to ensure a smooth transition from the legacy variants in the 2020 timeframe.