​ANALYSIS: How Airbus’s first big twin blossomed into the A330neo

Whisper it, but the recent first flight of a second-generation Airbus A330, the re-engined -900, was tantalisingly close to the 25th anniversary of the twinjet’s maiden sortie on 2 November 1992. Understandably, Airbus hasn’t made much of this historic milestone, but the fact is that the aircraft’s continuing appeal in a market of much younger competitors is a credit to the A330’s original concept which dates back to the 1980s.

“Like a human, today’s A330 is very different to how it was 25 years ago. The yesterday and today are very different,” says Airbus’s A330 marketing chief, Crawford Hamilton. 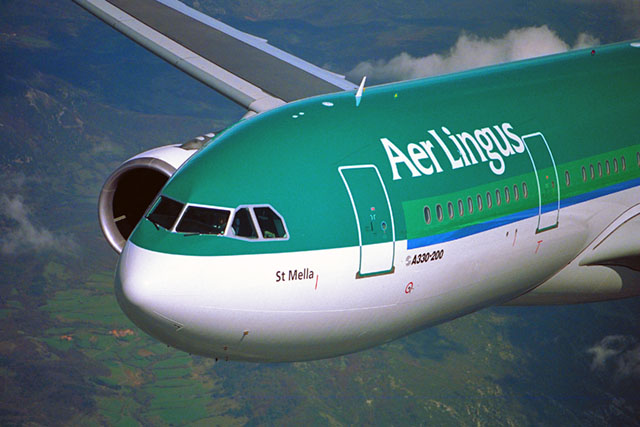 The A330-900 that kicked off the Neo flight-test programme on 19 October may be dimensionally identical to the original A330-300 which led the original development programme back in 1992, but the twinjet has evolved considerably. The major difference centres on Rolls-Royce Trent 7000 engines key to delivering a double-digit improvement in efficiency. But the other changes go more than skin-deep, covering revised aerodynamics and sharklets, higher weights and the latest A350-derived passenger cabin (see graphic).

The arrival of the A330-300 in 1992 was significant in itself, being Airbus’s first “big twin” and conceived as a larger-capacity, longer-range (but not long-range) successor to the original “air bus”, the A300B. In parallel, Airbus developed the long-range quad A340 family as a sister design based on the same fuselage, wing and related systems. The two models were developed side by side because during the pre-launch phase in the 1980s, potential customers could not decide whether they wanted two or four engines. 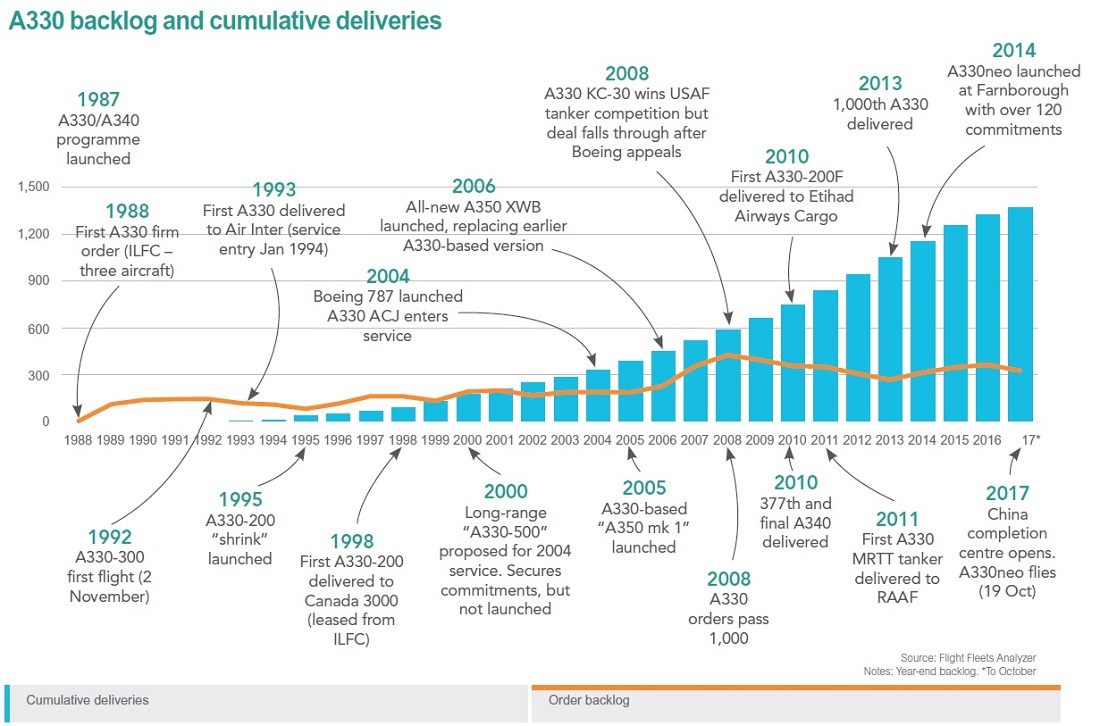 "North American operators were clearly in favour of a twin, while the Asians wanted a quad. In Europe, opinion was split between the two," the now-retired Adam Brown told Flight International back in 1998 when he was Airbus vice-president strategic planning.

Brown explained that Airbus chief engineer Jean Roder enabled the two designs to effectively become one, by creating a common wing structure. “The [development] cost savings this presented enabled us to do both aircraft.”

Studies crystalised around the A330/A340 designations in 1986 as the next Airbus types after the A320 single-aisle. Customer interest meant that the quad led the development programme which resulted in an amusing debate about the designations. 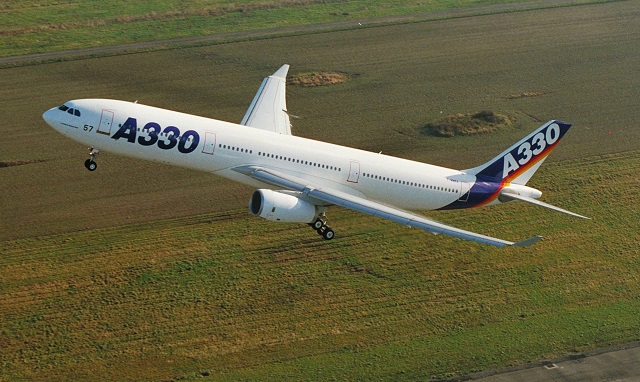 As lead variant, the quad was initially dubbed the A330, while the twin became the A340. “Then our salesmen came back and said that airlines would never get their brains around a twin having a ‘four’ in its name and the quad not…so we reversed the designations,” recounted Brown.

While the A330 moved forward with General Electric CF6 power, Airbus adopted a version of the A320’s CFM International CFM56-5 for the quad. The A330 engine options were quickly expanded to include the Pratt & Whitney PW4000 – and in a first for Toulouse at the time – an engine from Rolls-Royce, the Trent 700.

Full go-ahead came just before the 1987 Paris air show and the programme quickly moved into its stride. The A340 took to the air in October 1991 and A330 testing began just over a year later, on 2 November 1992. At the time, Airbus had secured 270 orders for the two types, around half of which were for the twinjet.

French domestic carrier Air Inter was the first to introduce the A330, beginning services in January 1994 between Paris and Marseille with its aircraft configured in what at the time seemed an extremely high count for a twinjet – 412 seats.

The A330 was initially seen as the medium-range sister to the long-range quad. But the onslaught of long-haul twin-engined operations changed the perception around this type of flying, which earlier had question marks about twins’ suitability to fly across large oceans or unpopulated landmasses. This meant that range development of the A330 was crucial if Airbus was to challenge its US rival in the sector.

Cue the A330-200 “shrink” (above), which entered service in 1998 and finally provided Airbus with a direct competitor to the Boeing 767-300ER. The little sister was an instant hit, leading the way to establishing Airbus as a genuine player in the long-range twin sector.

Hamilton says that the A330 “is now on a trend to becoming the preferred entry-level widebody – we knocked the 767 off its perch about four or five years ago”.

In 2000, Airbus briefly flirted with an even longer-range double-shrink derivative, the A330-500, before concentrating on developing the existing family. This led to the introduction of tanker and freighter variants, as well as an ACJ corporate version. And in 2008, 10 years on from the -200’s debut, A330 orders passed the 1,000-mark.

Weight development had turned the larger A330-300 into a more capable machine as the sun set on the A340. Despite stretching and re-engining the quad, the world’s airlines had firmly moved on from four engines in that sector.

In the meantime, Boeing – which was seeing the A330 trounce its once-dominant 767 in the marketplace – responded aggressively with the launch in 2004 of the all-new 787 family. Airbus could be forgiven for believing this signalled the end of the original A330, and set about creating a major derivative equipped with new engines and upgrades.

It was dubbed the “A350”, but after initial sales success Airbus was persuaded that this warmed-up A330 didn’t go far enough to be a true long-term 787 challenger. So the project was shelved in 2006 as the all-new “A350 XWB” emerged.

Then a strange thing happened. Boeing ran into serious production delays on the 787 and Airbus found customers – both old and new – turning to its venerable A330.

“The launch of the 787 was the best thing that happened to the A330,” says Hamilton.

Flight Fleets Analyzer data illustrates his point – since 2004 when the 787 was launched, Airbus has sold over 1,000 of the original A330-200/300 variants – a number that surprises Toulouse as much as Seattle.

With production being sustained well into the A350 era, Airbus found itself re-evaluating its decision not to re-engine the A330. It realised that a cost-effective competitor to the 787 could be created, which could also solve the headache its smallest A350 variant was creating – the now defunct -800.

And so at Farnborough 2014, eight years after Airbus replaced the Mark 1 A350 with an all-new design, a second-generation A330 was launched as the Trent 7000-powered A330neo. 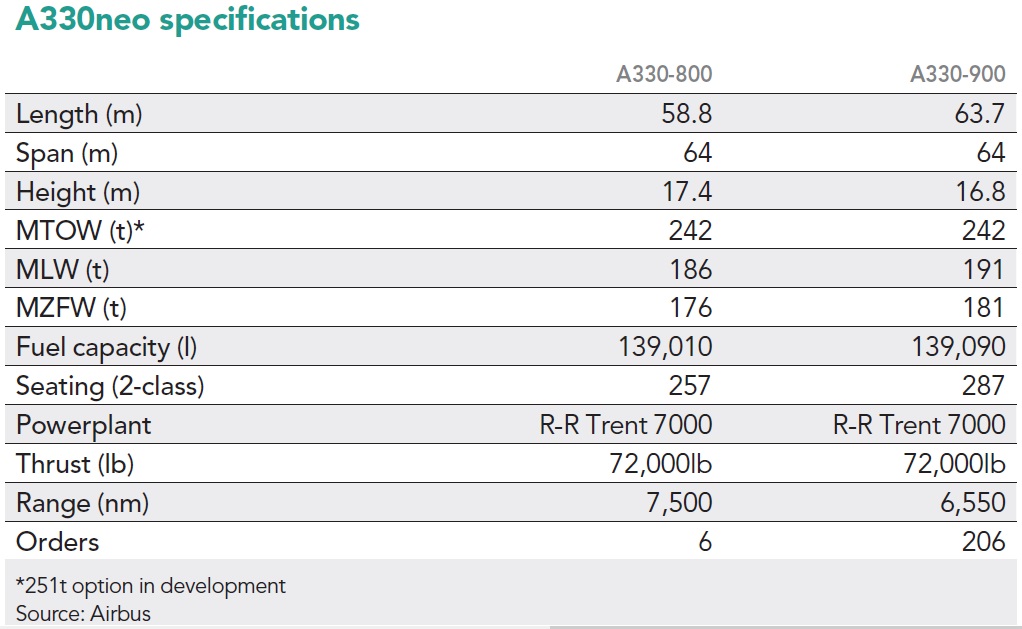 The original schedule called for flight-testing to start in spring 2017, to allow deliveries to begin before year-end to launch customer TAP Portugal. But development delays, largely due to hold-ups at R-R, prevented the start of testing as A330neo airframes sat in Toulouse awaiting engines.

With flying now under way, Airbus and R-R face a challenging development programme to start deliveries under the revised schedule of mid-2018. But Hamilton is quietly confident: “There have been things happening outside our control,” he says. “But we’ve always been in close consultation with Rolls. They had the block on resource. We’ve now got the aircraft flying…and we’ll make sure it happens.” 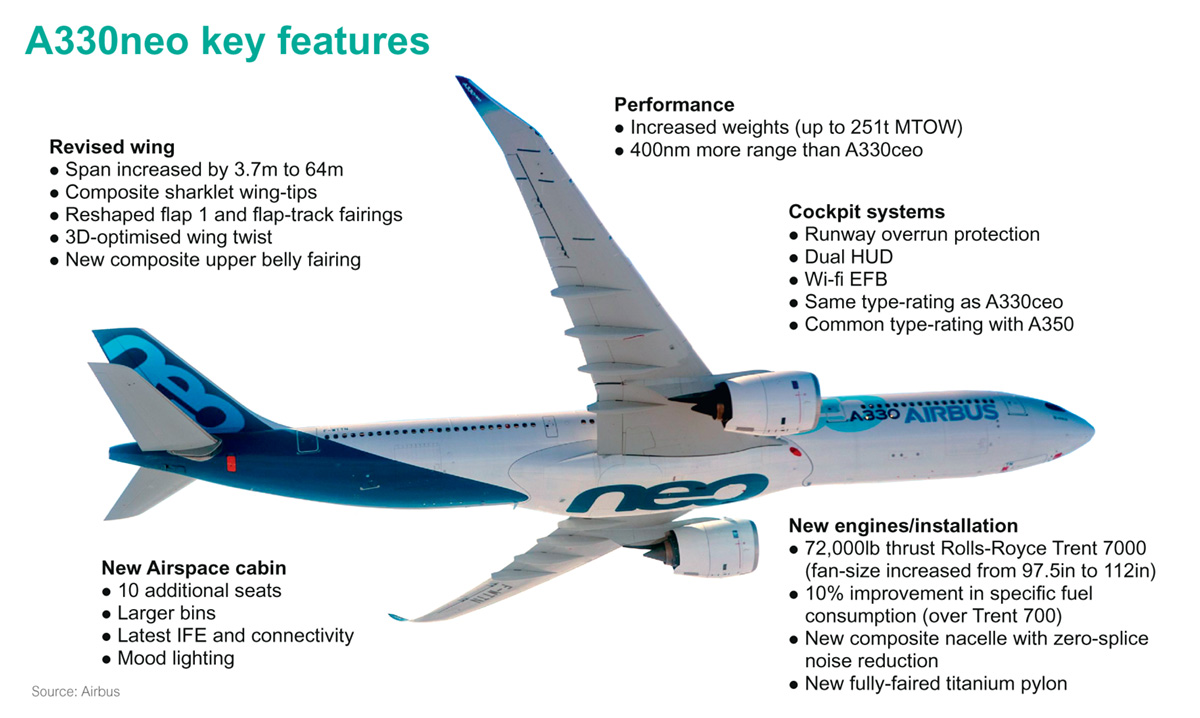 From a sales perspective, the A330neo has had a strong start, securing 212 orders. Hamilton says sales are on track, despite a slow 2017 so far (to the end of October), with just two orders from AirCaln announced (and four cancelled after TransAsia ceased operations). Additionally, a memorandum of understanding from Air Senegal for two aircraft was disclosed at this month's Dubai air show.

One area of potential concern is the poor showing so far for the A330-800 variant, which has just six orders. These are all from one customer – Hawaiian Airlines – which has indicated it could review the order (itself a replacement for an earlier A350-800 contract).

But Hamilton is confident about the -800’s potential, which is derived from the A330-200 airframe: “The A330-200 category has been doing well over the past few years. It’s the most popular widebody [in operator terms] – we have 95 operators and 600 aircraft, and that’s a heck of a base to have,” he says.

“The A330 has good [cabin-configuration] versatility, good range, low trip-cost and from a financial point-of-view, it’s low risk. For airlines that are growing, the logical first [widebody] step is the A330,” adds Hamilton.

“What’s missing is that the A330-200 fleet is actually still quite young. But there are prospects to replace older A330-200s and 767s in the relatively envisionable future. And you’ve then got to add growth into that.”

The future may be all about the A330neo, but Airbus is still building and selling the current variant. With over 100 -200/300s still to deliver from existing orders, Hamilton says Airbus “can still do the current aircraft, no problem. We’ve still got the MRTT which is the most popular tanker. And we still have the A330-200 Freighter. They are aircraft that are still powered by the current engine, and we’ll do them as long as anyone wants them.”

There is one potential cloud on the A330’s horizon, which has a hint of deja vu about it: The prospect of another all-new competitor from Boeing in the form of its New Mid-market Airplane (NMA).

“It may or may not [happen] but we’ve got to be prepared,” says Hamilton, who remains to be convinced that a market opportunity exist for an all-new aircraft.

“Boeing goes on about there being a gap in the market. But we don’t see any ‘gaps’ because the A330 is filling them,” he says. “The A330 has the versatility to do anything that any NMA can do, and more. Which gives it a very large appeal worldwide.”

In other words: Boeing, bring it on.