​ANALYSIS: How do you replace a first-generation A330?

The Airbus A330 has proven to be one of the most successful twin-aisle types ever. A quarter of century on from its first flight in November 1992, and with the second-generation A330-900 now in flight, how are operators deploying the twinjet and what types might replace the existing fleets?

The first aspect to consider is that, despite 25 years of production, more than half of the current “A330ceo” passenger fleet was built since January 2010 and will not be retired for many years to come. However, many operators have already placed orders for newer types, and others have leased aircraft that may exit their fleets once the initial 10- to 12-year leases expire. Flight Fleets Analyzer shows that about 150 known leases are set to expire between 2018 and 2022, an average of 30 a year. 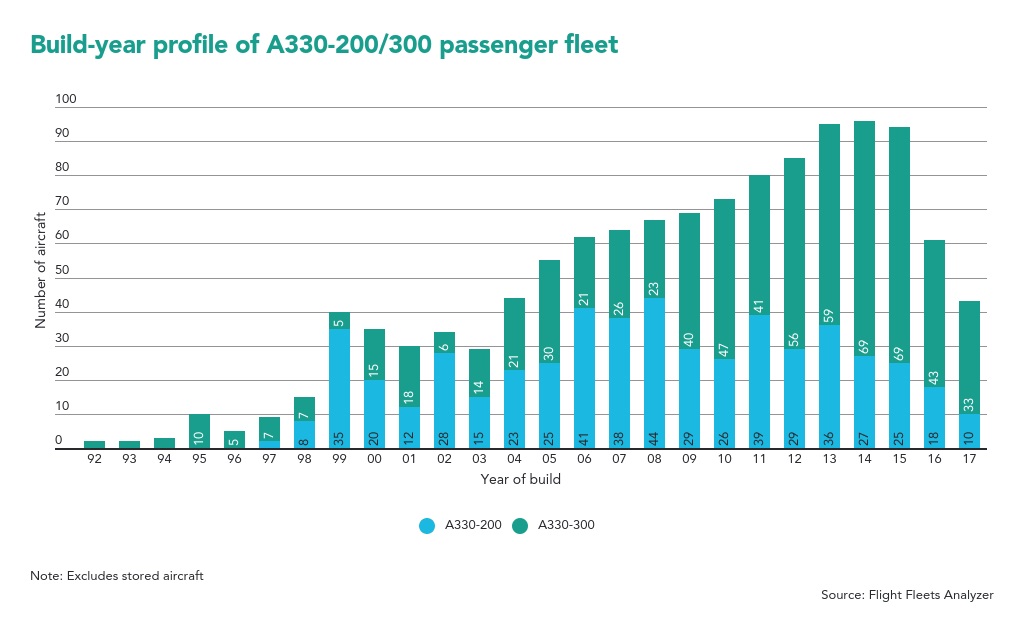 The A330 reached its peak production rate of 10 per month only in 2013, with the type receiving a major boost from the delays suffered by the Boeing 787, which led to a number of airlines selecting A330s to fill the capacity gap.

However, all good things come to an end, and the ramp-up of the 787 to 12 aircraft per month, together with the entry into service of the A350-900, led to production of the A330ceo being reduced to six per month in 2016. While the 787 rate is increasing to 14 per month by 2019, the A330 rate looks unlikely to change after Airbus initially planned an increase back up to seven per month by 2019, during the transition to the re-engined A330neo.

Both versions of the original A330 are used over a wide variety of missions and market sectors. The initial low-gross-weight A330-300s were primarily used on intra-Asian routes up to about 2,700nm (5,000km), as Airbus had pursued a strategy of offering the A340 for longer, intercontinental markets. The A330-200 “shrink” marked the first move of the type into long-haul operations, and was successful at replacing the smaller 767-200/300 at several airlines. It has also been in widespread use among leisure carriers, often in a high-density layout with more than 300 seats. Until the advent of the 787-8, the A330-200 thus became the default type to launch new long-haul routes, or for those with thinner demand.

Airbus has steadily increased take-off weights for the A330-200 and -300, which, combined with engine and aerodynamic improvements, means the larger -300 now has sufficient range to fly many Asia-Europe and transpacific routes. 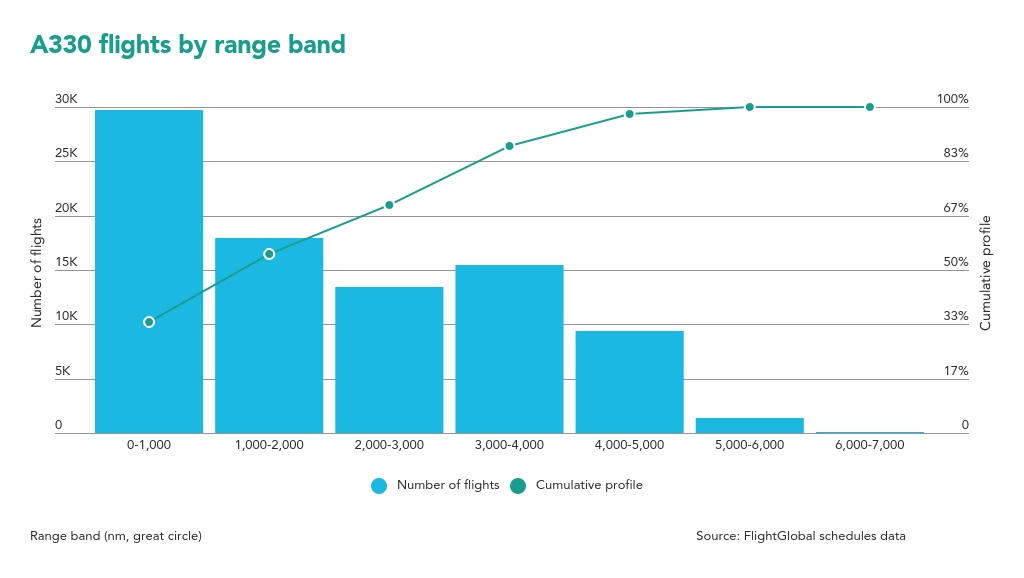 A case in point is the use of A330-300s on many China-Europe flights, which were beyond the payload/range capability of the -300 until recent years, and instead were flown by -200 variants. Delta Air Lines has also acquired the latest 242t A330-300s, and uses them across the Pacific. Today, the longest route flown by the -200 is the 6,000nm great-circle distance from Buenos Aires to Rome by Aerolineas Argentinas, and for the -300 it is 5,000nm from Paris to Reunion, flown by Corsair and French Blue.

However, analysis of FlightGlobal schedules data reveals that the A330’s average sector length is about 2,000nm. This is well within the capability of the latest single-aisle types, including the largest variants – the Airbus A321neo and Boeing 737 Max 10. Therefore, for some airlines, these could also be considered potential replacements, especially for the smaller A330-200.

Smaller carriers will tend to look for a single type to replace their current fleets of A330s, but as airlines grow, the option of splitting a replacement across two types to better match aircraft sizes to market demand, and to reduce overall operating costs, becomes possible. In terms of pure cash-operating-cost per seat, it is very difficult for a twin-aisle type to better the cost of a large single-aisle type. If belly cargo is also an important source of revenue to the airline, however, this can alter the revenue and profit balance in favour of twin-aisles.

With regards to the in-service fleet, the top 29 operators of the A330 account for about two-thirds (800 aircraft) of the current airline fleet. Although there are several airlines with average stage lengths well below 2,200nm, all except Thai have at least one route that is beyond the realistic capability of large single-aisle types (around 3,000nm).

As illustrated by the Venn diagram, which comprises A330 operators with five or more aircraft, the operator base includes many airlines that have already placed orders for types that could potentially replace their current A330 fleets. For the purposes of our analysis, this includes the 787-8 and -9, the A350-900 (with the assumption that the A350-800 is not proceeding), and the A330-800/900. 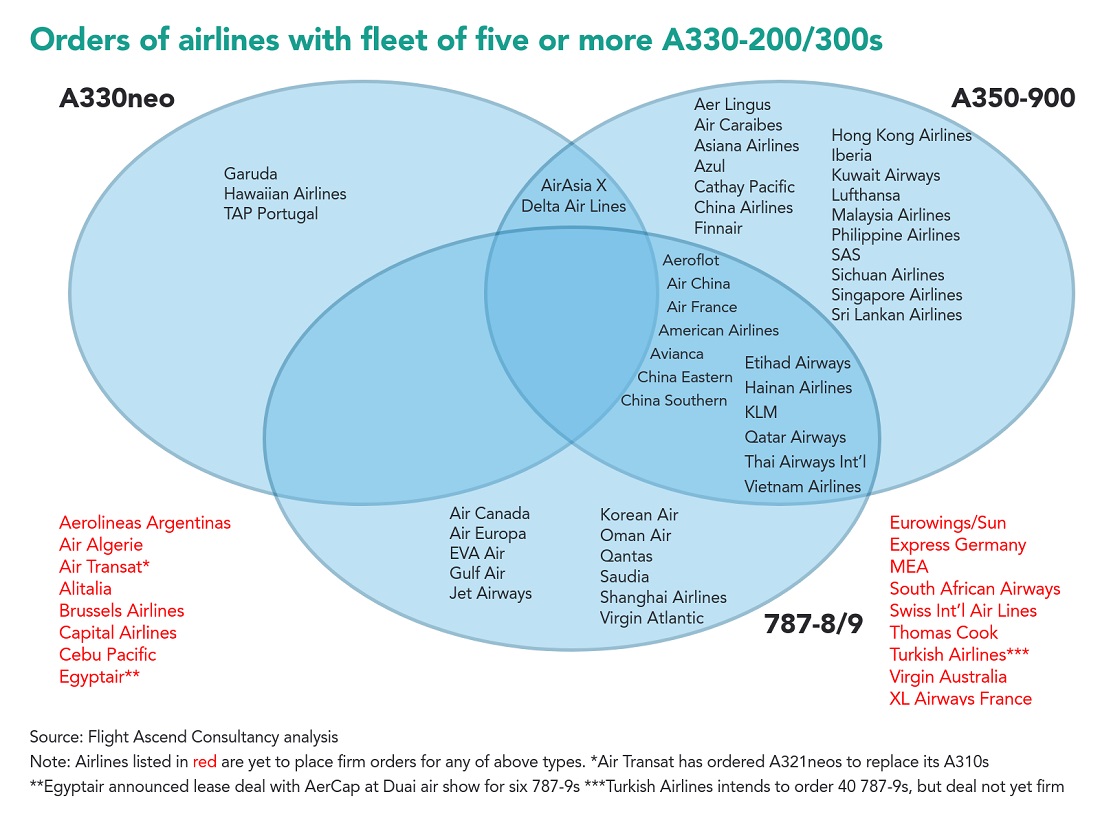 There are 11 current A330 operators that have ordered 787s, and a further 13 that have ordered both 787s and A350-900s. This suggests that the 787 will play a significant role in the replacement market for current fleets of A330s, albeit that large numbers will remain in service for many more years. For many operators, the A350-900 may be seen as overly capable in terms of size and range. These include several major Asian operators of A330-300s, which generally use the aircraft on routes up to 3,800nm. Their fleet plans are weighted towards growth as well as replacement, but this region would appear a key battleground for the A330neo and will determine the degree of success for this type.

If the A330neo is not seen as the optimal replacement for medium-haul A330-200s and -300s, then the current operator base could be very influential in determining the timing and design requirements for a new middle-of-the-market aircraft.

To paraphrase an earlier successful aircraft, Airbus will be hoping that the only replacement for an A330 is another A330, but it appears that the 787, the A321neo and any new middle-of-the-market programme from Boeing will also be strong contenders in the 2020s.