A sequence of events that began with the shooting down of an Iranian copy of the Lockheed Martin RQ-170 Sentinel stealth unmanned air vehicle led to an Israeli air force Lockheed F-16I being shot down, and a massive aerial attack being launched against at least a dozen targets inside Syria.

Brig Gen Tomer Bar, second in command of the Israeli air force, says the Israeli strike inside Syria was "the biggest and most significant attack the air force has conducted against Syrian air defences" since the 1982 Lebanon War.

The chain of events erupted in the early hours of 10 February, a few minutes after the Iranian UAV was detected, when an Israeli Boeing AH-64 Apache attack helicopter shot it down with its chin-mounted cannon.

An F-16I "Sufa" fighter arrived at the border area from a base in northern Israel a few minutes later, and was met with heavy fire from Syrian surface-to-air missile batteries: mainly Russian-made SA-5 systems. 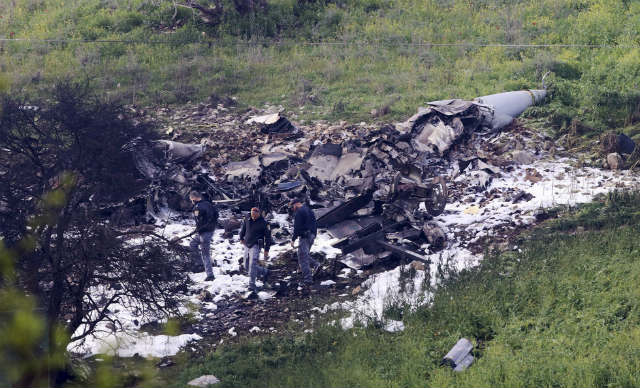 While an investigation is ongoing, Israeli sources indicate that at least 20 missiles were launched towards the fighter, which was damaged after one exploded close to it. Both crew members ejected before the aircraft crashed. One of them was severely wounded and the other escaped with only minor injuries.

Meanwhile, the air force located the mobile ground control station that has been used to operate the Iranian UAV, and this was destroyed as it tried to escape.

Israel launched a massive attack on Syrian- and Iranian-manned surface-to-air missile batteries, some positioned far from the border. At least 12 such targets – including three air-defence batteries and a base on the outskirts of the capital, Damascus – were destroyed.

One consequence of the military action could be to strengthen the air force's calls to acquire more advanced Boeing F-15s and additional Lockheed F-35Is.

"In the wars that are around the corner, we need aircraft that can carry a lot of bombs and missiles," one Israeli source said.

Previous opposition to the acquisition of additional F-15s has almost vanished. If a deal advances, it is likely to occur around the middle of a recently approved, 10-year package of funding from the USA worth $38 billion.

Israel's air force command wants to keep a "critical mass" of fighters that can carry a variety of heavy weapon systems, including those produced by local companies. The immediate effort is to acquire additional surplus F-15s from the USA, on top of the nine ex-Air National Guard examples delivered last September. Once intended for use only as a source of spare parts, these are now being upgraded to the same standard as the Israeli service's F-15C/D "Baz" strike aircraft. This process includes air force technicians performing fuselage, wing and tail surface treatments and installing Israeli-made systems.

The 10 February clash also will serve to expedite plans to establish a missile unit within Israel's ground forces to strike at threats from within home territory.

While the Syrian army has been badly damaged during the ongoing civil war, the nation's surface-to-air missile capability has remained almost intact, with equipment including SA-5 and SA-17 batteries supplied by Russia. Its military appears to be prepared to mirror Iranian doctrine by launching large salvoes of weapons against airborne threats: a practice which could encourage Israel to employ surface-to-surface missiles where possible – protecting its air force assets from attacking such targets up to a distance of 400km (216nm). Defence minister Avigdor Lieberman earlier this year expressed his full support for the development of such a capability.

The sequence of attacks that was ignited by the Iranian attempt to fly a UAV into Israeli airspace will have immediate effects on the way the Israeli air force will approach such situations in the future. With Iran's deep penetration into Syria, another such clash is just a matter of time.