ANALYSIS: How is 2018 shaping up for Brazil's airlines?

In the office of Azul chief executive John Rodgerson, a giant map of Brazil takes centre stage on one wall. The vast map of South America's largest economy serves as Rodgerson's reference point when he points out parts of Azul's network, stretching from the carrier's hub at Viracopos/Campinas airport to small cities in Brazil's interior that previously had no air service.

Rodgerson is upbeat when talking about Azul's outlook going into the new year. The airline is adding new Airbus A320neos to upgauge routes that were operated by Embraer E-Jets, and is growing its international network. In a milestone emblematic of the turning fortunes of Brazil's airlines, Azul finally went public in April 2017, after scrapping two earlier attempts amid a severe downturn in Brazil's economy.

"We are bullish on 2018 and 2019," Rodgerson tells FlightGlobal. "We are seeing economic activity come back, and the best measure of that is close-in demand – bookings inside 14 days, seven days are coming back. That's what gets us excited."

Rodgerson's sentiments mirror that of his counterparts at Brazil's main passenger airlines – Gol, LATAM Airlines Brasil and Avianca Brazil. Weeks into the new year, Brazil's airline chiefs have never sounded as optimistic, and economic indicators are on their side.

The International Monetary Fund is forecasting a 1.5% growth in GDP for Brazil in 2018, although the country's finance minister, Henrique Meirelles, told CNBC in January that he believes Brazil's growth could be as high as 3%. Easing inflation and record low interest rates have further boosted the confidence of Brazil's airlines as they step into 2018.

The outlook is welcome relief for the carriers, which saw annual domestic air traffic growth slump to single digits beginning in 2012 following three years of double-digit growth, according to statistics compiled by Brazil's civil aviation authority, ANAC. From August 2015, the country's airlines entered a 19-month-long stretch of declining domestic traffic, which only ended in March 2017. 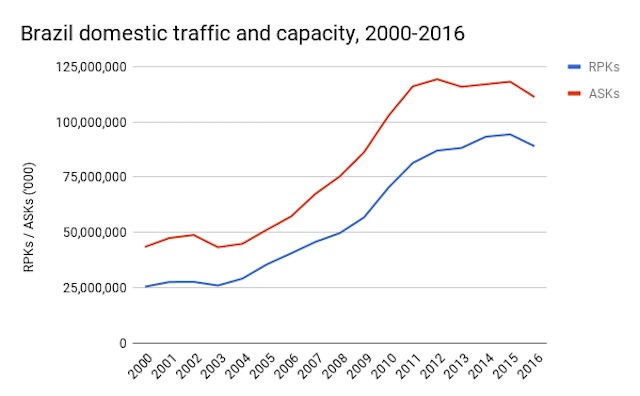 Brazil's airlines reined in domestic capacity accordingly, with ASKs declining by as much as 5.9% in 2016, according to ANAC's latest available data.

At LATAM Airlines Brazil, a turning point came during the second half of 2017, says chief executive Jerome Cadier.

"We saw corporate demand starting to pick up around May and June, but it was not firm. We had one good week, one average week, then one bad week. But in the second half of the year, we saw it was positive week over week," he tells FlightGlobal.

LATAM Airlines Brazil will raise domestic capacity by 2-4% in 2018, marking the airline's return to growth after years of shrinkage. The growth will largely be evenly split across both corporate and leisure markets, says Cadier.

Brazil's airlines might be cheering the country's economic recovery, but the operating environment is not exactly what it was before the downturn.

For one, chief executives say it will take a few more years before demand returns to pre-crisis levels.

Avianca Brazil president Frederico Pedreira points out that the domestic industry lost 8 million passengers in 2016 from 2015.

"It's not something that we are going to recover in a year and a half," he tells FlightGlobal.

Brazil's upcoming Carnival holiday, which begins later this week, will be a barometer of how demand in 2018 will measure up, says Pedreira.

"In December and January, we traditionally see more leisure traffic than business. The big test is when the year finally starts, after Carnival," he adds. Avianca Brazil is seeing healthy bookings for Carnival, typically a period of high leisure travel for Brazilians.

Aside from waiting for a full return to pre-crisis demand levels, Brazil's airlines are also emerging into a slightly different landscape from before the downturn. The financial crisis had prompted some airlines to rethink their target customers and business model.

São Paulo-based Gol, the country's largest airline by capacity, has in recent years pivoted itself to win more high-yielding corporate passengers. The airline now views itself as more of a hybrid carrier, offering seats with additional legroom on domestic flights and a differentiated product called Gol Premium on international flights that comes complete with complimentary meals and VIP lounges.

In addition to changes to its on-board product, Gol built up its flights at Brazil's top airports with an aim to offer the high frequency schedule that is favoured by business travellers.

Corporate passengers now make up almost half of Gol's overall customers, up from less than 40% in 2012, Gol chief executive Paulo Kakinoff tells FlightGlobal.

The move to gain more business traffic was part of a strategy to weather the downturn, which has resulted in the airline shedding dozens of aircraft and thousands of employees since 2012.

"We were able to simultaneously cut costs dramatically and improve our revenues by attracting more corporate travellers," says Kakinoff. "These passengers pay three to five times higher than leisure customers."

Kakinoff declines to specify how much greater a share Gol is aspiring to for its corporate passengers, but reiterates that the airline remains committed to retaining its focus on the business travel segment.

Gol's move to capture more business traffic has not gone unnoticed by its rivals. "The competition for corporate demand is higher than previously," says Cadier. "We saw all of the players really going for the corporate destinations and schedules more than before, and adapting the product that fits the corporate passenger more."

LATAM Airlines Brazil is not standing still. The airline is adding wi-fi to its domestic Brazil fleet of A320 family aircraft from April, and plans to add more rows of additional legroom seats to the aircraft by the end of 2019.

"It's not a radical change and not a creation of a different class," says Cadier. "It's really recognising that we can offer a better pitch for some passengers who do want to pay for that."

The airline is also making changes to its frequent flyer programme to make it more attractive and inclusive for domestic Brazil passengers, says Cadier.

LATAM Airlines Brazil's fight to remain relevant to the country's corporate passengers comes at an interesting time for the airline group headquartered in Santiago. Prompted by growing competition from Latin America's low-cost carriers, the airline restructured its domestic fares in Latin America in 2017, stripping out checked bags and free meals.

Cadier acknowledges that those changes "do not necessarily target the corporate passengers", but says the new domestic product allows for more efficient operations that allow the airline to add more capacity that is targeted at corporate travellers.

If there is one thing that surprised Brazil's airline chiefs during the downturn, it is the fact that no consolidation took place in the industry.

"The big disappointment of the Brazil crisis was that there was no consolidation," says Rodgerson. "Enough capacity came out that was the equivalent of consolidation, but we would have supported it either way."

Rodgerson, a former JetBlue Airways executive who was part of David Neeleman's team that founded Azul, points to the US mainline carriers' financial turnaround as justification for how consolidation can benefit the industry.

With Brazil's airlines seeing healthier profits and demand, airline executives have different views on whether consolidation will take place, and whether they would like to take part. "We want to work to have our airline in a position to play a role in consolidation," says Kakinoff.

He declines to elaborate further, but says Gol is analysing all possible scenarios.

Both Kakinoff and Cadier believe there is room for consolidation in the domestic Brazil airline industry, but Cadier says it will be difficult for LATAM to participate in any merger and acquisition activity.

Already the biggest airline in Latin America, the carrier would face difficulty in securing regulatory approvals for any further consolidation, Cadier points out.

Rodgerson thinks any chances of consolidation among Brazil's airlines in the near future are low, saying it is probably a "5% scenario".

"I don't think you will have a willing buyer or seller; egos are big," says Rodgerson. "I would be shocked if there was consolidation."

But after a rollercoaster ride over the past decade, Brazil's airlines also acknowledge that the market had taken twists and turns they found hard to predict – and it would be foolhardy to bet on what happens next.

"It's really anyone's guess right now. When I joined the company five years ago, a lot of folks were saying that consolidation is imminent and that it will happen, then four years went by. Perhaps our capacity to predict that was as good as the economy," jokes Cadier.