Even before the Air Berlin estate is divided up, Lufthansa has already nabbed some of the Oneworld carrier's prized possessions – market share on important routes to southern Europe.

At the same time, Air Berlin transferred its flights serving southern Europe (except Italy), Turkey and North Africa to Austrian subsidiary Niki. This was part of a restructuring effort that involves reduction of Air Berlin's fleet and a focus on scheduled services – in particular long-haul flights – from Dusseldorf and the German capital.

The move was, in part, driven by an intent to reduce seasonality in Air Berlin's business. But with the decision, Air Berlin departed the leisure market – a segment where it had established its business and brand during the 1990s, and which was the basis of its troubled expansion strategy later on. Air Berlin became known as the "Majorca Shuttle" in Germany, and opened a base on the Spanish island. 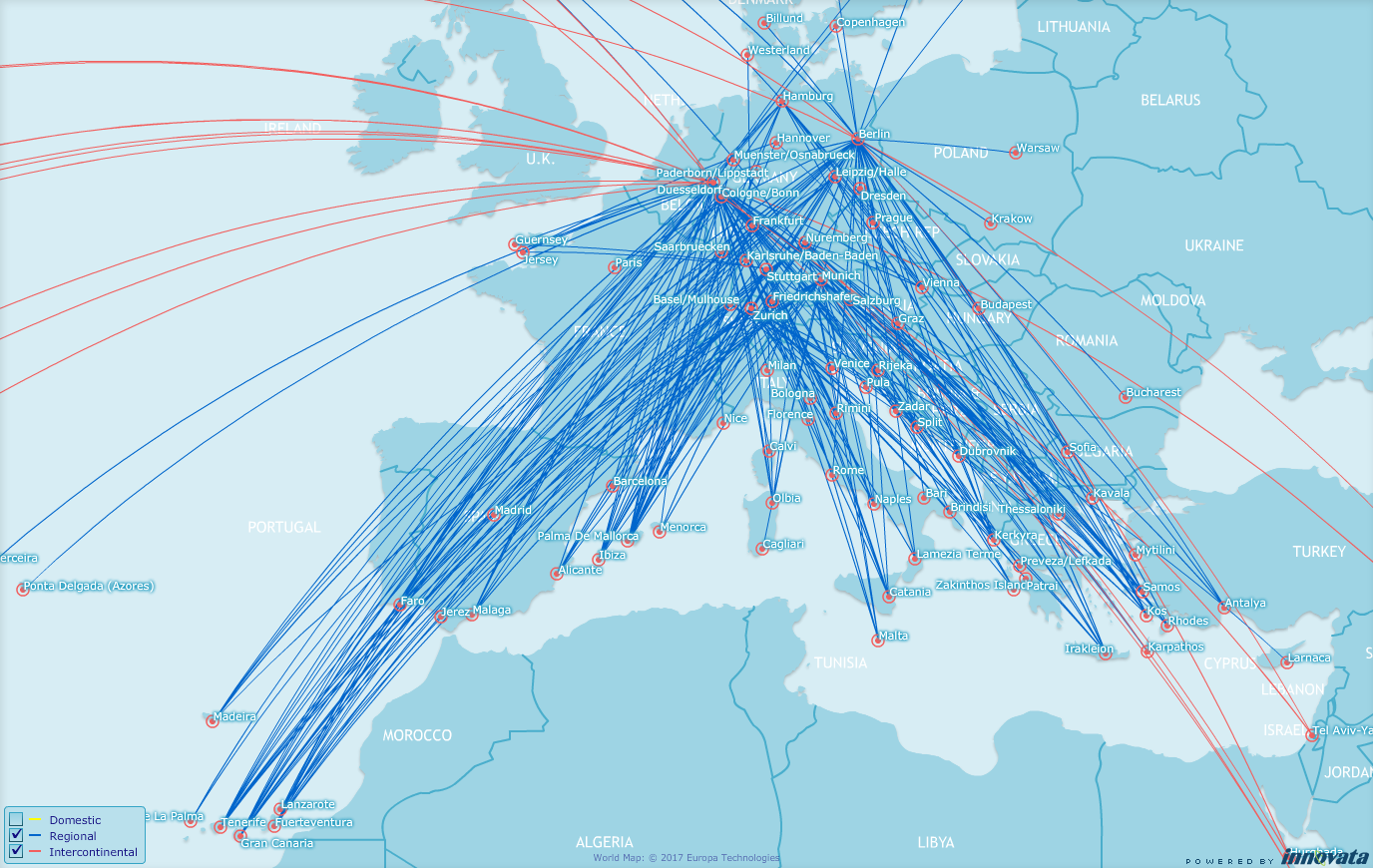 Following Air Berlin's retreat from Majorca, Eurowings established a base there earlier this year. Eurowings wasn't the only airline that targeted the vacated market – Germania, too, opened a station in Majorca, and EasyJet set up a seasonal base on the Balearic island.

FlightGlobal schedules data shows that in August 2016 – before Air Berlin's fleet and network reduction plans were disclosed in September that year – the airline provided 26.2% of total capacity, in ASK terms, between Germany and Spain. Air Berlin shed almost all flights to Spain – bar a route from Dusseldorf to Barcelona – in line with the transfer of leisure operations to Niki. But Niki continued operating some 70.4% of Air Berlin's former capacity. In August 2017, Niki provided 18.8% of ASK between the two countries.

Overall capacity between Germany and Spain slightly declined during the period.

Meanwhile, Eurowings more than tripled capacity on the routes in question. That growth represents, in part, a transfer of capacity from Germanwings to Eurowings, as the former unit's operations are being gradually reduced and crewmembers migrate to Lufthansa's mainline. However, Eurowings and Germanwings' combined capacity share on routes to Spain still grew 2.4 percentage points to 10.5%.

Lufthansa's mainline separately raised capacity on its routes to the Mediterranean country from Frankfurt and Munich, with the carrier's share of overall ASKs rising from 9.2% to 10.2%. Eurowings operates from Munich today, but not from Frankfurt.

Other airlines, too, increased capacity in the market segment. Ryanair raised ASKs 21%, with its capacity share growing from 12% to 14.7%. Norwegian nearly doubled capacity as part of an effort that included launching flights to Spain from Dusseldorf and Hannover. Germania increased ASKs by a third and started operations from Nuremberg – a city previously served by Air Berlin. 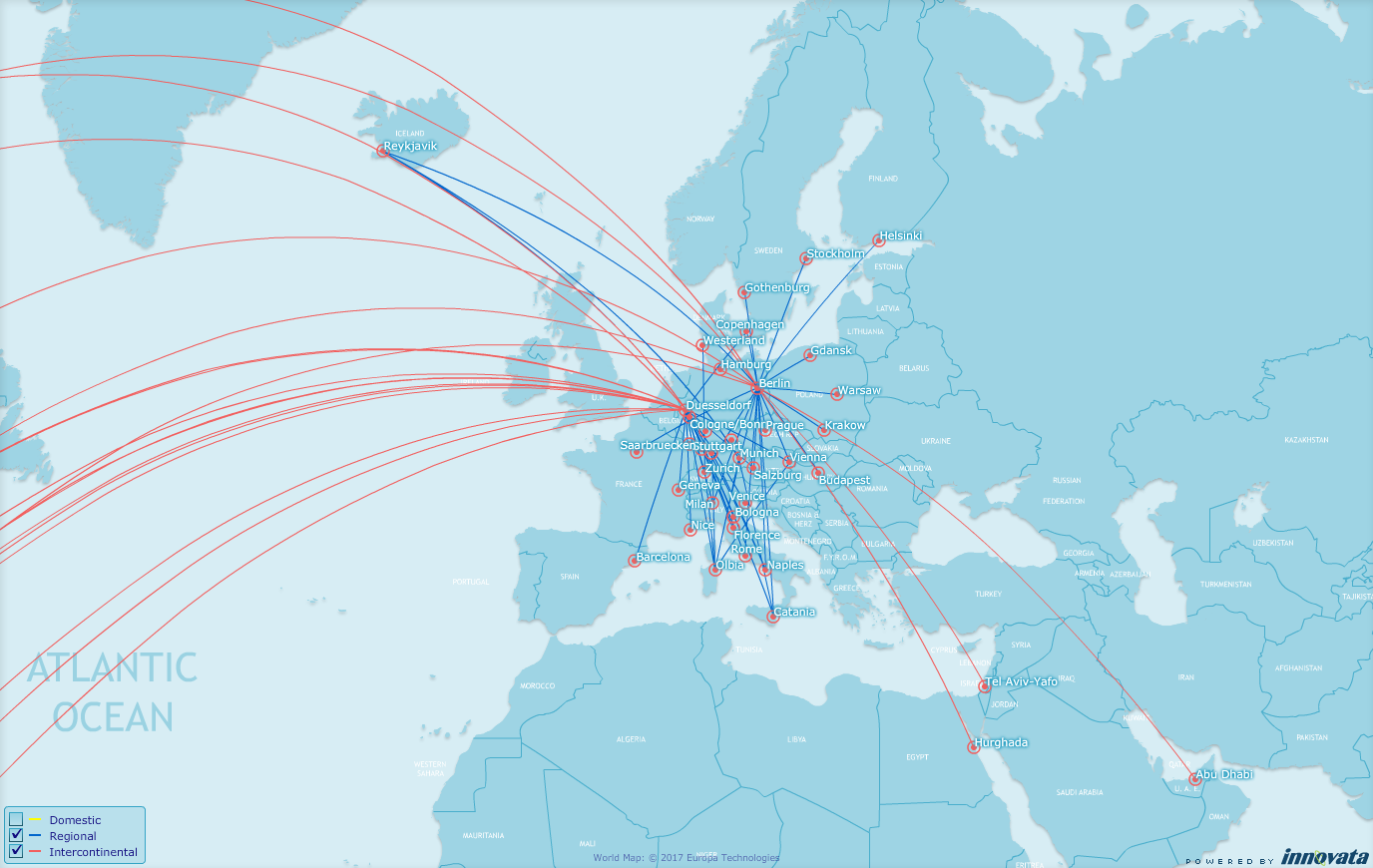 On many routes, Niki replaced Air Berlin with no or few changes, while Eurowings flights succeeded those of Germanwings. Niki reduced capacity on several services. Its route between Berlin and Ibiza is a typical example: Niki reinstated about two-thirds of Air Berlin's vacated capacity. But on other routes – for example on flights to Las Palmas from Cologne and Munich – the Austrian subsidiary added capacity compared with previous Air Berlin operations.

There are also vacated Air Berlin routes – particularly from smaller regional airports – that Eurowings has started to operate without competition from Niki. Examples include Eurowings' flights to Majorca from Dresden and Friedrichshafen.

Eurowings has not replaced Air Berlin (yet), because Niki still operates the majority of its parent's former routes to Spain. But Lufthansa has already manoeuvred its budget division to an advanced position in Air Berlin's old leisure market – ironically with aircraft and crew wet-leased from the Oneworld carrier – and Eurowings can further expand its presence when Air Berlin's remaining business is divided up under the insolvency proceedings.

Niki's role as a custodian of Air Berlin's former leisure routes is relevant – particularly in view of a previous, failed attempt to spin the Vienna-based subsidiary off into a separate company. Before Air Berlin transferred routes and aircraft to Niki earlier this year, the plan was to merge the Austrian division with tourist specialist TUI Group's German-based flight operations to form a new European leisure carrier. TUI and Air Berlin shareholder Etihad Airways were set to have stakes in the new business. But the parties disclosed in June a decision to abandon the plan. Niki remained an Air Berlin subsidiary – and thus is now up for sale.

And among Air Berlin's assets are routes to another, large market that has so far been spared by the carrier's network rejig with Niki, namely Italy. Air Berlin continued operating flights to that market in co-operation with fellow Etihad partner Alitalia.