Six decades ago, Sud Aviation of Toulouse introduced the world to the short-haul jet concept with its exquisite Caravelle, laying the foundations for Europe’s global export success in the airliner business

It’s somewhat appropriate that one of the four crew members aboard the first flight of the SE.210 Caravelle was a young engineer named Roger Béteille. The Frenchman – who is now aged 95 – would go on to be one the pioneering leaders of Airbus Industrie and become known as “Mr Airbus”. And that maiden sortie of the little French jet in 1955 was a key milestone in Europe’s journey to establishing itself as a major force in civil aircraft development.

Caravelle production began in 1953 and spanned three decades with customers on every continent other than Australia. During its lifetime the Caravelle was a centrepiece to France’s aerospace consolidation, as well as to Anglo-French aeronautical collaboration when Concorde and Airbus Industrie were little more than pipe dreams. The twinjet probably also inspired Douglas Aircraft to address the short-haul jet market, resulting in over 2,400 DC-9s, MD-80/90s and Boeing 717s being produced.

Studies into what would become the world’s first genuine short-haul jet began in the early 1950s by France’s Société Nationale de Constructions Aéronautiques du Sud-Est (SNCASE). Inspired by the French transport ministry’s request for tenders regarding a “moyen-courrier”, the specification was designed to meet the requirements of Air France and fellow French airlines: A 55-65-seater with “a 6,500kg (14,000lb) payload, a cruising speed of 600km/h (325kt) and a range of 2,000km (1,080nm)”.

Toulouse-based SNCASE, or “Sud-Est”, was one of France’s state-owned aircraft manufacturers, and leading the studies was its chief engineer Pierre Satre. Many years later he would play a key role on the Concorde programme.

Sud-Est was officially notified in January 1953 that its Rolls-Royce Avon-powered “X-210” twinjet design had been chosen by the French government as the country’s first jet airliner project. A launch followed immediately under the SE.210 designation in partnership with former rival Sud-Ouest, and the name “Caravelle” was adopted in honour of a 16th century sailing ship. Before the decade was out, the two production partners would merge to create Sud Aviation, which later became France’s Concorde partner.

Writing in Flight shortly after the Caravelle’s go-ahead in March 1953, Sud-Est president Georges Hereil outlined his plans for cross-channel collaboration on France’s new airliner: “British aircraft designers have given a brilliant lead in the domain of jet aviation,” he wrote. “It will be seen when we release our plans that Franco-British aeronautical collaboration, which our company has promoted for more than five years, will once again prove its usefulness in the cause of commercial aviation.”

Sud secured a breakthrough deal with United for 20 aircraft in 1960, but was unable to capitalise on this US success

Existing ties with de Havilland were extended, with Sud-Est adopting the entire Comet nose and cockpit. This was aided by the fact that the Caravelle retained a similar five-abreast, 3.2m (10ft 6in)-diameter fuselage.

Chief engineer Satre told Flight that adoption of the Comet nose “would not only save design and tooling costs, but, since it is an installation accepted to ICAO standards and in use with Air France and UAT, much unnecessary discussion can be avoided!”

Along with the Comet-inspired nose, two other notable Caravelle design themes had emerged: the cabin windows were triangular in shape to provide passengers with the maximum downward view for the minimum amount of transparent material; the forward cabin entry door was supplemented by drop-down “airstairs” integrated into the aft fuselage that would allow the Caravelle to operate independently of ground services.

The prototype Caravelle began to come together in September 1953 in Sud-Est’s experimental hangar at its Saint Martin plant on the southwest side of Toulouse-Blagnac airport – buildings that remain today as part of the ATR and Airbus production complexes. 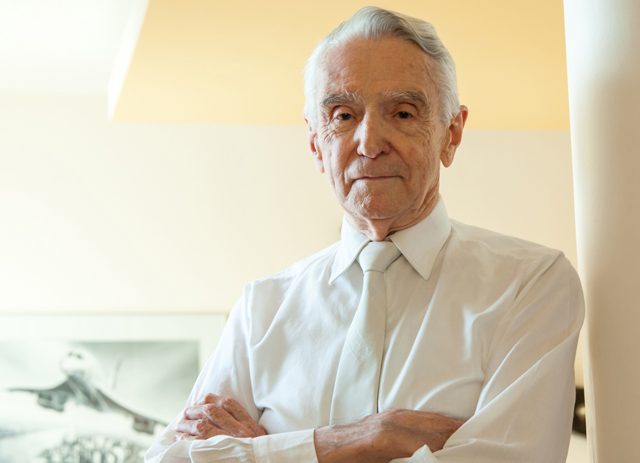 The Caravelle made its public debut at the 21st Paris air show the following month, and this magazine was quick to heap praise: “A startling break with accepted pure-jet transport ideas,” wrote Flight. “With its flank-mounted Avons, it is an eminent example of imaginative French approach – the realisation of a formula long-postulated but never, until now, accomplished.”

The French twinjet really was a new shape in the sky. The tail architecture, with the stabiliser mounted midway up the fin, created a crucifix arrangement that was both distinctive and influential on later designs. The aft-mounted pod configuration would influence many twin and trijet engine installation decisions over the next several decades. A patent ensured that Sud-Est benefited financially from royalties for its pioneering design.

Early Caravelles did not have thrust reversers, instead relying on a braking parachute stowed in the tailcone. The wing featured upper and lower airbrakes, while the high-lift system comprised single-slotted trailing edge flaps.

In February 1956 the first orders were placed, when Air France signed for 12 Caravelles with options on 12 more. The French carrier would eventually operate almost a fifth of the 279 Caravelles delivered. 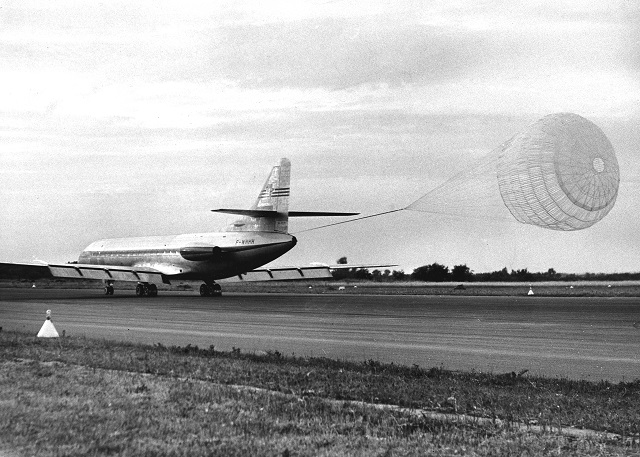 Early Caravelles did without thrust reversers, using a braking parachute instead

Flight was clearly a fan of the French jet, writing in our leading article of June 1957 during the Le Bourget air show under the headline “Aeronautical Paris Fashions”: “And the beautiful Caravelle, now being demonstrated in the flesh to the richest market in the world. This jet transport is being promoted hard by a firm very much awake to the turbojet-conscious mood of American operators.

“Technically it is outstanding, and its impact on European routes will be keenly felt in 1958 by Air France's competitors. The Caravelle is a specialised short-haul jet transport which will present a challenge of its own, and it will not be seriously threatened until the elusive ‘new plateau’ short-haul jet of the mid-sixties is realised.”

The first production Caravelle flew on 18 May 1958, and the type was finally awarded full approval on 2 April 1959 and Air France inaugurated regular services the following month.

A more powerful derivative, the Caravelle III with increased operating weights and centre fuel tanks, entered service with Alitalia in May 1960. After several false starts, the Caravelle VI-N was the next derivative off the drawing board, benefiting from even more power and higher weights. It made its debut with Sabena in February 1961.

In the meantime, Sud had secured its first major US order in February 1960 when United Air Lines signed for 20 of the improved Caravelle VI-R variant (plus 20 options), and co-operation agreements were reached with Douglas Aircraft and General Electric. 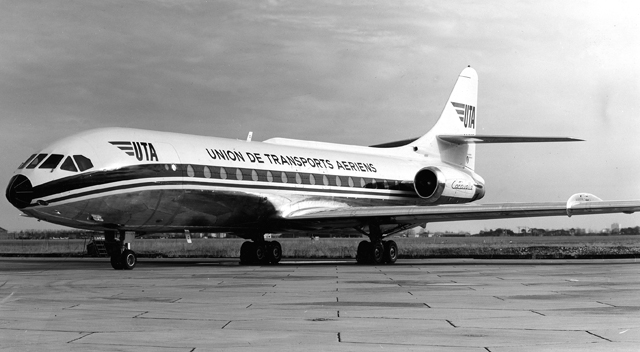 The Douglas tie-up was designed to establish Sud’s sales drive into North America and beyond, and involved the US manufacturer adopting the Caravelle as its short-haul product, which it would market and support worldwide outside Europe. There was also the prospect of Douglas setting up a US Caravelle assembly line. But sadly, both Douglas and GE links would ultimately lead Sud up blind alleys.

Speaking to the author several years ago, Béteille said he believed that Sud missed a golden opportunity to cement the Caravelle as truly global success story when it failed to make progress with Douglas.

“In my opinion, the crucial mistake was to reject Douglas’s suggestion (on the request of American Airlines) to change the fuselage section, to give convenient room for luggage. The ‘Caravelle XIV’ development was rejected by the financial authorities, with the silly argument: ‘Caravelle sells as it is, why waste money for a significant production modification?’,” he said.

United put its first Caravelle “Jet Mainliner” into service in July 1961 between New York and Chicago. And while the GE plans came to nought, Sud pursued the idea of a US-engined Caravelle, resulting in the 10B powered by the 14,000lb-thrust JT8D-1 (Sud abandoned the Roman numeral numbering system in 1963). This “Super Caravelle” was launched into production by Finnair in December 1962.

As competition in the short-haul sector intensified in the mid-1960s, Sud launched the 11R with a slight stretch and a main-deck cargo door, delivering the first of only six aircraft to Air Afrique in July 1967. The Caravelle 12, a final attempt to revive the programme, evolved from the Pratt & Whitney-powered 10B with fuselage plugs fore and aft, and high-density seating increased to 139 passengers. By the time the Caravelle 12 made its first flight on 29 October 1970, Sud had merged with Nord to create France’s major aerospace conglomerate, Aérospatiale.

By now, Concorde was Europe’s major civil aerospace project, and the Airbus A300B was finally leaving the drawing board. French domestic airline Air Inter took the last of 279 Caravelles produced on 16 March 1973. In all, Sud secured 35 Caravelle customers in 27 countries with production peaking in 1960/61 at 39 aircraft annual deliveries.

Caravelle operations began to decline significantly in the mid-1990s and the last remaining aircraft were still flying during the early 2000s in remote parts of Africa and South America. Operations finally ended in July 2005 when Democratic Republic of Congo airline WaltAir retired its last Caravelle.

And what of Béteille? He went on to be a leading light at Airbus, overseeing the design of the A300 as chief engineer, where he insisted the fuselage diameter be wide enough to accommodate LD-3 containers side-by-side in the holds. Béteille retired in March 1984, but not before he had overseen the launch of the A320 and taken “one of the most difficult decisions I ever made” – to adopt fly-by-wire flight controls. “Either we were going to be first with new technologies or we could not expect to be in the market.”

And Airbus, which showed its appreciation of Béteille by naming its A350 assembly line after him, continues to build his “222in” wide fuselage on the A330neo.