ANALYSIS: How the jet travel era began in earnest – 60 years ago

This year marks the 60th anniversary of a seminal moment in commercial aviation: the start of transatlantic jet services.

While jet travel was nothing particularly new by 1958, the launch of services between the USA and Europe in October that year by the UK's BOAC and US airline icon Pan Am is the true legacy of what the airline industry represents today. Prior to 1958, the industry's foray into jet services had been sporadic. 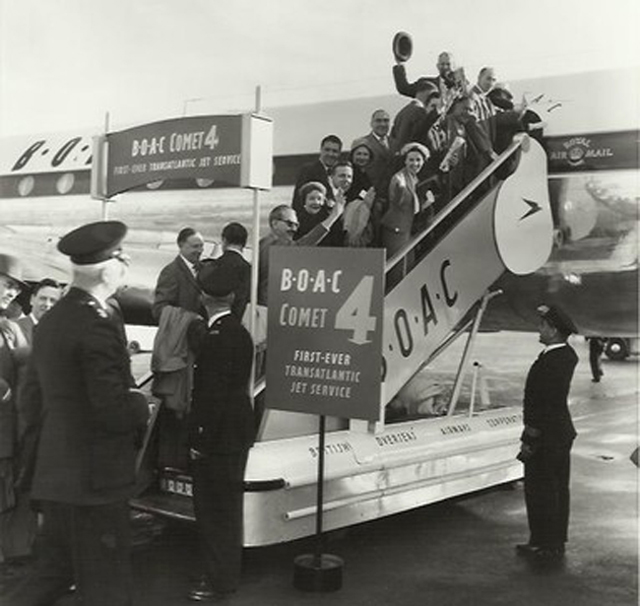 BOAC ushered in jet travel in May 1952 when it began services with the de Havilland Comet I, powered by four of the company's Ghost turbojets. The inaugural flight was a multi-hop "Empire" service from London down through Africa to Johannesburg.

Sadly, the pioneering operations of the Comet I came to an abrupt halt within two years when the jet was grounded after a series of tragic accidents subsequently traced to metal fatigue proliferated by a design error.

By the time this happened, Boeing was already well advanced with the development of its own jet transport that would become the 707, while de Havilland was working on larger and longer-range Comet variants powered by four Rolls-Royce Avon turbojets. 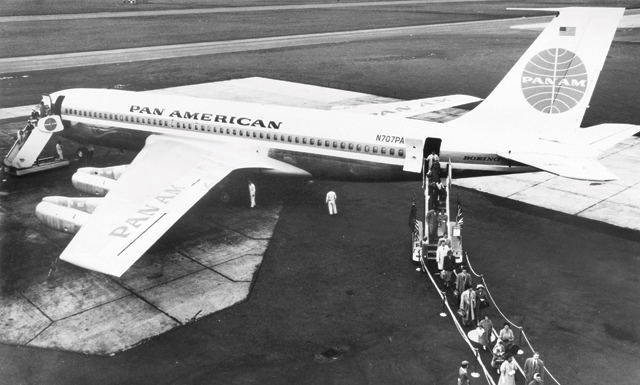 Pan Am Boeing 707: Beaten across the pond by BOAC and the Comet 4

Meanwhile in the Soviet Union, Tupolev had developed a short-haul airliner from the Tu-16 jet bomber. Dubbed the Tu-104, the West had its first glimpse of the Soviet jet when three turned up at London Heathrow in April 1956 during a state visit. The aircraft officially entered airline service in September 1956.

During 1957 and 1958, as de Havilland raced to develop its improved Comet 4, incorporating changes resulting from the inquiry into the 1954 accidents, Boeing was surging ahead with its much more advanced model 707.

The Boeing quadjet, powered by Pratt & Whitney JT3C turbojets, flew on 20 December 1957 with the first production Comet 4 taking to the air four months later on 27 April 1958. Both types received their certificates of airworthiness in September that year and the race was on to be the first to inaugurate transatlantic flight, with BOAC championing the British Comet and Pan Am flying the stars and stripes with the 707.

On 4 October, BOAC and the Comet made air transport history when the sleek airliner operated simultaneous transatlantic revenue flights in both directions between London Heathrow to New York Idlewild (now JFK). 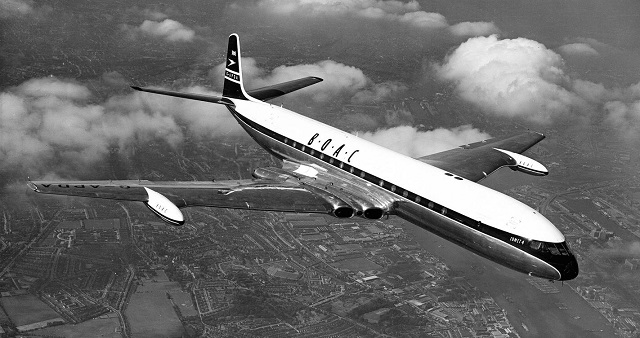 This is how Flight reported the historic event in its 10 October 1958 issue:

"Meanwhile from London Airport, at 09.55 hr B.S.T., Comet 4 G-APDC (Capt. Millichap) had taken-off on the first scheduled jet service to New York. On board was the chairman of B.O.A.C., Sir Gerard d'Erlanger, and 31 passengers (eleven fare-paying). The flight took 10 hr 20 min, including a 1 hr 10 min refuelling stop at Gander. Messages were exchanged between Sir Gerard in DC and Mr. Smallpeice in DB en route.

"The Comet was back in business, and the race which officially had never existed had been convincingly won."

It was not long before the US "team" to caught up, with Pan Am inaugurating 707 scheduled services between New York and Paris on 26 October.

Flight's leading article at the time of the Comet's inaugural provides some contemporary context about how the aviation achievement was perceived – in the UK at least:

"The Comet has always had the most profound effect on the national emotions, to the extent that its sponsors' chief problem has often been to keep publicity under control. The fact that the Comet's re-entry into service was spiced by the challenge of American jet competition did not make this problem any easier.

"There were moments when many people, mindful that haste in aviation is not always compatible with safety, felt that the Comet and all that it stands for were driving B.O.A.C. against their better judgment into a race with Pan American. But B.O.A.C.'s crews were jet-trained to a high pitch, de Havilland had delivered three aircraft several weeks ahead of schedule, and the Corporation was ready to go.

"By their brilliant, surprising two-way transatlantic 'inaugural' last Saturday, B.O.A.C. made sure of two things: their traffic, and their claim – which, as Pan American know, means a great deal commercially as well as nationally – to have made history."

This magazine was fortunate to experience Comet and 707 transatlantic services first-hand in the run up to their introduction, travelling on BOAC and Pan Am proving flights.

“By Comet 4 to New York" (Flight, 10 October 1958) described this new era of travel: "It took us something like five-and-a-half hours between London and Gander to discover that Comet 4 G-APDB would be one of the winners in the biggest aviation Autumn Double yet. By the time we had landed at Gander it was clear from the carefully worded phrases of every B.O.A.C. man aboard – including the managing director – that it needed only the final clearance from the Port of New York Authority (and a clutch of fare-paying passengers to make it legal) for the first-ever pure-jet passenger service across the Atlantic to begin." 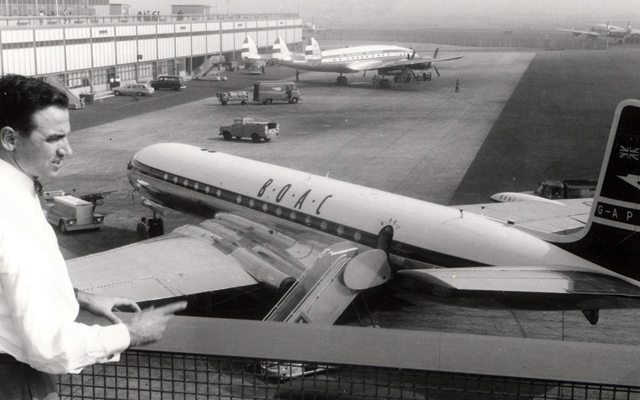 Our correspondent went on to describe the passenger's experience flying in the new jet:

Later that month Flight’s technical editor – the late, great Bill Gunston OBE – flew from London to New York on a Pan Am 707 proving flight. In "Jet Clipper" (Flight, 31 October 1958), Gunston described how he "waited for the monster to arrive from Paris" ahead of his flight on board 707-121 N711PA (named Clipper Mayflower): "It was while climbing the gangway that we received an impression that was to stay with us throughout our acquaintance with the aircraft: the 707 is really big, having a fuselage volume roughly twice as great as that of any contemporary four-engined airliner in service."

Gunston put the Flight readers right inside the 707 with his description of the departure: "Mayflower broke ground after 38 sec at a weight of 211,000 lb, having probably used some 6,000ft of the available runway. At once it was pulled up into a firm climb while the gear was retracted and power was cut back (with water switched off), and before the 500ft level was reached the flaps were being inched into their fully home position. The profile has been carefully planned to minimize the noise nuisance while ensuring that the rate of climb is maintained at the highest level (and always positive).

"Touch-down at 2225 G.M.T. resulted in a flight time of 5 hr 29 min from Keflavik, and a mean ground speed of 490 m.p.h. Door-to-door time was ten minutes greater, giving an overall block time of 9 hr 35 min from London, including one hour spent on the ground at Keflavik."

Gunston's conclusion was a stark reminder of how transformational the arrival of the jet airliners were to transatlantic services and how rapidly civil aviation had evolved since the end of the Second World War:

"The big Boeing had been parked next to one of Pan Am's fleet of DC-4 cargo machines, and the changes wrought in transport design in the short 14 years separating their first flights was truly remarkable. As we regretfully left Mayflower, Pan American's New York manager said, 'I think we will make some money with this ship.' I was hardly in a position to disagree."

There was no turning back after those transatlantic jet inaugurals 60 years ago. While development of the Comet fizzled out after the Comet 4 series, the development of the 707 – and its Californian rival, the Douglas DC-8 – rapidly provided airlines with longer-range and more efficient long-range jet transports. 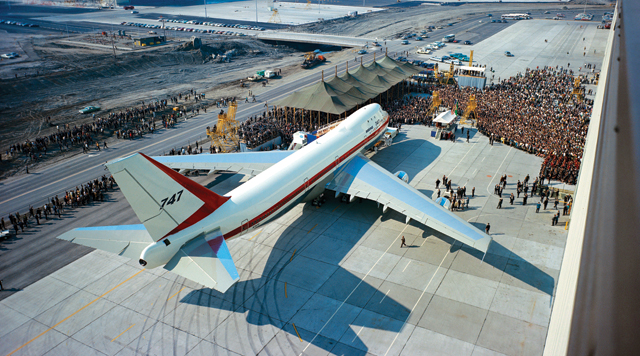 Within 12 years of those inaugurals, the first widebody services across the Atlantic were a reality when Pan Am introduced the Boeing 747 in January 1970. Six years later, supersonic travel became a reality when Air France and British Airways introduced Concorde. The Mach 2 airliner began regular transatlantic services in May 1976.

But despite the grace and speed of Concorde, it was the lumbering Jumbo Jet that ruled the transatlantic airways during the late 20th century. But the Boeing flagship had given way to the widebody twinjets as the backbone of transatlantic services by the time the Concorde era – and supersonic passenger travel – ended in 2003.