Air India could cease to exist in the near future should the Indian government go through with plans to privatise the loss-making carrier. So far, low-cost carrier IndiGo has been the most vocal about its interest in Air India.

It has even held a call with investors and analysts, where it declared its intention to acquire the flag carrier's international operations, as well as its Air India Express subsidiary. IndiGo's plan would see the duo's international network become a long-haul, low-cost operation.

The Tata Group, which holds a 51% stake in Vistara, has also been widely tipped to make a bid for Air India. The company did not respond to FlightGlobal's query on its reported interest.

IndiGo has been consistently profitable shortly after its launch in 2006, turning in annual net profits of between $18 million and $303 million. The low-cost juggernaut could be an even larger player, with an expanded network and a more varied fleet, should it have its way in the government's (hoped for) divestment of debt-saddled Air India.

Although no concrete plans have been released on how Air India, affectionately known as the "Maharajah", will be divested, a Reuters report on 8 July quoted unnamed government officials as saying that New Delhi is considering selling Air India in parts to make it more attractive to potential buyers. A deadline of early 2018 has also been set to begin the sale process.

Ansuman Deb, senior associate at ICICI Securities, believes that now is the time to privatise Air India: "The airline industry right now enjoys multiple tailwinds which have considerably de-risked the erstwhile nature of the business. Lower crude prices, lower interest rates, a prominent lessor community and favourable currency can turn around a loss-making airline business as we have seen in the case of SpiceJet."

What IndiGo wants from Air India's international operations is simple: Air India's routes, many of which have favourable slots even at congested airports, as well as its widebody fleet.

In fact, IndiGo has said that regardless of whether the Air India deal goes through, it will pursue long-haul low-cost operations. Its meaningful presence at key capital cities in the country will no doubt be a key enabler for its long-haul venture.

"We would not attempt to enter the international long-haul market but for the fact that we have this large domestic feed network," said fellow co-founder Rakesh Gangwal. Data from India's Director General of Civil Aviation shows that IndiGo has a 40% share of the domestic market.

Air India's international network is also far more expansive than its nearest rival Jet Airways. Jet only connects to Toronto in North America, while Air India has direct services to San Francisco, Chicago, New York and Washington. In Europe, the Star Alliance carrier also has twice as many routes as Jet.

The flag carrier also connects to Sydney and Melbourne in Australia, and to Hong Kong, Tokyo, Seoul and Shanghai in North Asia - both regions are not served by Jet. 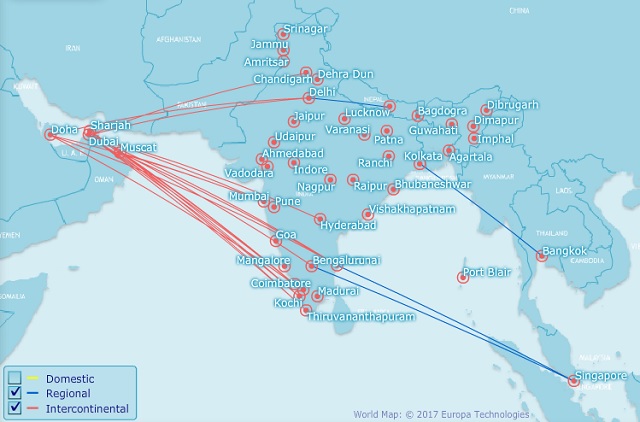 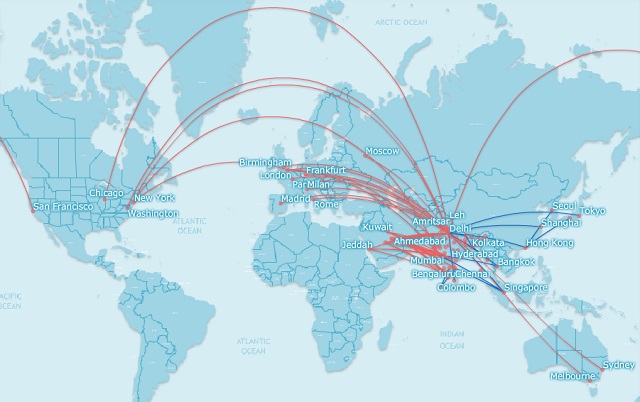 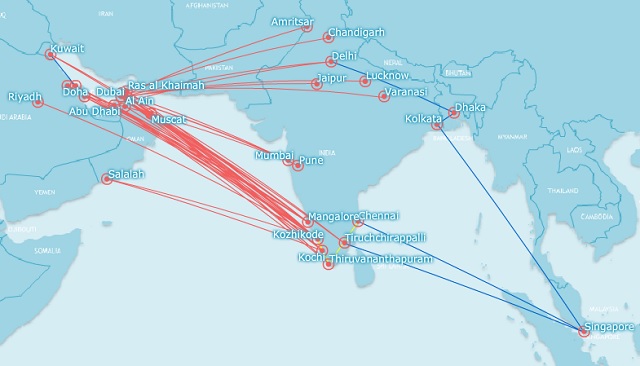 Data from SRS Analyzer by FlightGlobal's Diio division shows that IndiGo has inbound and outbound flights throughout the day at its hub at Delhi's Indira Gandhi International airport. These passengers will be able to connect onto Air India's departures to the United States and Europe in the early morning and early afternoon.

Conversely, Air India's long-haul flights arrive in Delhi from Europe and the United States in the late morning and afternoon, respectively. Thus presenting options for connecting onto IndiGo's domestic network on the same business day.

The situation is similar at Mumbai Chhatrapati Shivaji International airport - albeit on a smaller scale with a daily flight to Newark and London-Heathrow as its only long-haul services to United States and Europe.

The DGCA has placed Air India's domestic market share at 15%.

While IndiGo has said that it could acquire all of Air India's airline operations, should it not be able to acquire only its international business, this would bring the combined domestic market share to 55% - which could face objection from the competition commission.

Deb believes that competition regulators could step in, should such a scenario play out. Any investigation will likely delay the transaction or even exclude IndiGo from the deal.

Another roadblock that potential buyers of Air India would have to contend with, are the airline's powerful employee unions.

Mayur Milak, senior research analyst at IndiaNivesh Securities, says that Air India's troubles today can partly be attributed to the unions: "A lot of Air India's inefficiencies and bloated labour strength stems from their unions that protect underperforming and unproductive staff who should have long been sacked. Taking (the unions) out of the equation and adding a company like IndiGo will make Air India a leaner company with new working cultures and improved productivity."

Last month, local media reported that Air India's largest employees union, the Air Corporations Employees' Union (ACEU) had organised its members for a "movement" against the government's decision to privatise the carrier. ACEU represents over a third of the airline's 20,000 staff. Six other Air India-related unions were also said to have joined hands with the ACEU, condemning the sale as "creating industrial unrest" and accusing New Delhi of approving the divestment without employee consultation.

FlightGlobal data shows that Air India boasts the most bloated employee-to-aircraft ratio among listed India-based airlines. The carrier employs 184 people for every aircraft, compared to IndiGo's 59.

Besides the accumulated debt of Rs550 billion ($7.7 billion), another major concern for any suitor of Air India is its overleveraged balance sheet.

"It is not as much an operational challenge as perceived by many to manage Air India, but more of a one-time restructuring, which should involve necessary monetisation of assets and requisite write down of debt," says Milak, adding that the onus is on New Delhi to write off "a huge portion" of the debt.

IndiGo has however made clear that it does not have "the ability" or "desire" "to take on debts or liabilities that "could not be supported by a standalone restructured international operation of Air India".

Despite all that talk, the privatisation may still not pull through. After all, this is not the first time that India has tried to privatise the airline.

In September 2001, Singapore Airlines and the Tata Group dropped a joint-bid for a 40% stake in Air India. They cited political opposition to the sale, the slowing global economy and SIA's own plans to invest in the South-Western Pacific.

In a statement released at that time, SIA said that it was "surprised by the intensity of opposition to the privatisation of Air-India… In such an adverse climate, SIA is not confident that it can play a useful and effective role".

Then, in June 2005, the Air India board gave its in-principle approval for a proposed partial privatisation through an initial public offering. Further developments failed to .

Milak is, however, confident that third time's the charm. He sees the Modi government's "business-minded policies" such as the removal of the 5/20 rule, easing of taxes and the regional connectivity scheme as promising signs that the government will move away from the airline business and "let the experts run it".

"Air India's privatisation shows that the country's aviation market is truly moving forward to compete on a global scale with more efficient and well-run airlines flying today. We are a sweet spot with competitive airfares thanks to high demand for air travel. The pie is growing larger and there is space for all players to expand operations."