ANALYSIS: Israel wings it on F-35

Israeli air force (IAF) commander Maj Gen Amir Eshel summed up the significance of the event: “The ‘Adir’ is about to become a powerful accelerator for the entire IAF.

“We plan on leveraging our systemic abilities to new heights in attack and defence. Our aerial force will be much deadlier, combined and more relevant than ever.”

Israel has big plans for the jets, including some “customisation” to meet its specific requirements. But those responsible for making the F-35 the “accelerator” that Gen Eshel expects must rue the day, back in 2010, that Israel turned down the chance – it is thought for financial reasons – to become a full partner in the programme. At that time Israel passed up the opportunity to put its mark on the F-35’s design, but that is turning out to be the least of its problems.

At that time, Israeli industry sources described the non-partnership status as anything from a “big problem” to a “disaster”. They were not talking about the money they would lose by not being able to put, for example, some “super advanced” missiles on the stealth fighter. Rather, their concern was, and remains, that if Israel were not a full member of the programme their ability to develop top-of-the-line systems would remain at least one technological generation behind. 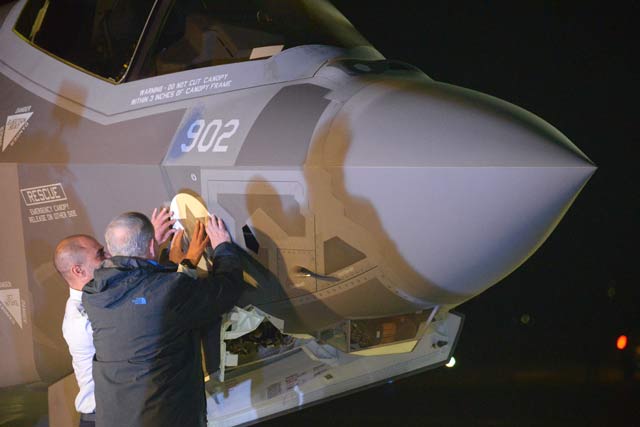 Hampering that relationship between Israeli industry and the F-35 is no small matter. Without attracting the attention of the censors in Tel Aviv, it can be said that Israeli companies including Rafael and Israel Aerospace Industries (IAI) have developed weapon systems in the “super advanced” class. So, not surprisingly, the Israeli ministry of defence has tried to bridge that partnership gap.

These efforts have one very distinct achievement. In November 2014 IAI inaugurated its wing production line for the F-35 at its Lahav division. That unit’s long history includes work on Israel’s indigenous Lavi fighter, which was scrapped in the late 1980s under pressure from the US government. Lahav has also made wings for Lockheed Martin F-16 and Boeing F-15 fighters, and for US Air Force T-38 trainers.

Now, tens of millions of dollars have been invested in a state-of-the-art production line for wings for F-35s that are not destined for the nine programme partners (which get their wings from Leonardo in Italy). Potential sales are estimated at $2.5 billion over 10-15 years.

According to Benjamin Cohen, an IAI vice-president and Lahav general manager, a total of 811 pairs of wings was based on the original assumption that Israeli would buy 75 F-35s. Israel has so far committed itself to buy 50, so Lahav is currently geared up to produce two pairs a month, he says, “but it may grow to four in 2018”.

Cohen says the division wants to increase its F-35-related wirk, and the first target is to get a contract for the production of the fighter’s main wing box. “A tender for this work is expected in 2019 and we will compete,” Cohen says.

When FlightGlobal visited the facility in late December, Lahav had already supplied 17 pairs of wings. “We managed to lower the work hours needed for the production of each wing, from 18,000 hours to only 7,000,” he says. The project has drawn Lahav into new technologies and capabilities, such as mating the composite wing skin to its metal structure. “This involves drilling 2,800 holes in each wing and sealing the fuel tanks that are built in the wing,” Cohen says.

While Israel may not enjoy the benefits of full programme partnership, it is making every possible effort to leverage the massive purchase of the aircraft for the development of new systems. One example is a command, control, communications and computing (C4) system developed for the Adir by IAI.

IAI says the system will enable the IAF to better manage, and rapidly field, networked applications that interface with core services over proprietary protocols developed especially for the IAF. Using generic communications infrastructure based on the latest software-defined radios, IAI’s new C4 system will provide the backbone of the IAF’s future airborne communications network.

IAI claims this network will dramatically improve over legacy systems now operating with its fleet of fourth generation F-16s and F-15s.

The new open-architecture system promises rapid software and hardware development cycles that will also provide more affordable modernisation and support of systems over the platform’s life cycle. And, IAI says, the C4 system introduces a new level of freedom for the IAF as it paves the way for additional advanced capabilities to be embedded in the F-35I. 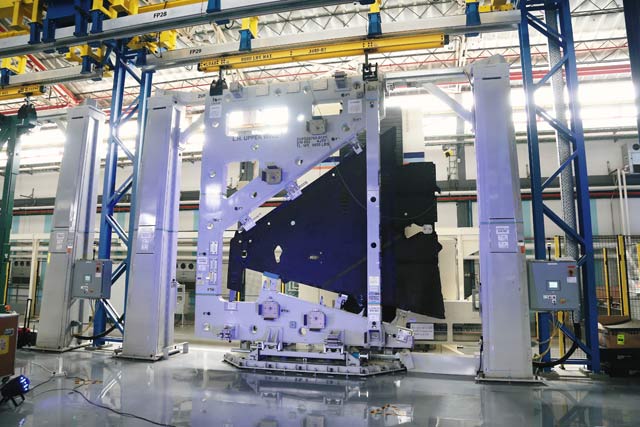 “This cutting-edge avionic system represents an ‘operational quantum leap’ in the capability of air power to conduct networked-centric air warfare” Cohen says. “It is part of a major change that takes place once in a decade, which includes the upgrading of fourth generation systems. This program will be critical to our national security as it represents a shift in air forces’ concepts of operations and operational capabilities.”

The system has been designed based on the vast operational experience of the IAF in a large range of combat missions.

The IAF wants delivery as early as possible of its Lockheed Martin F-35 test aircraft to expedite the process of adapting Israeli weapon systems to the aircraft.

The F-35 Adir contract for Israel includes one test aircraft that will be operated by the IAF’s flight test centre. According to Lt Col Ori, the chief flight test engineer at the centre, the special test aircraft will have an operational capability. But its main mission will be to enable the development of Israeli systems that will enhance the F-35’s capabilities in the IAF. “We will have to test Israeli-made weapons systems, so that they can be carried in the weapons bay of the aircraft and test it under different situations,” Lt Col Ori says.

Immediately after the first F-35 contract was signed with the US, the Israeli ministry of defence and the IAF approved the development of special versions of Israeli weapon systems for the aircraft. For example, Rafael is working on adapting its Python 5 and Derby air-to-air missiles to the aircraft. The company’s Litening 5 targeting pod is also in the adaptation process.

The delivery of the first two F-35s to the IAF is the beginning of a “crawling” process that will adapt the stealth fighter to the unique operational requirements of the IAF. The US may not be entirely happy to allow Israel to penetrate some core systems of the aircraft, but judging from the past experience with US-made fighter aircraft like the F-15 and F-16, the local effort should bring some additional capabilities to the Adir.