Major changes in the market have shaken up the perception that Japanese carriers’ fleets are built around tightly-packed widebody aircraft.

Two decades ago, Japan Airlines and All Nippon Airways were largely reliant on Boeing widebodies, including some distinct types, such as the domestically-configured 747-400D. Nowadays, though, there has been an increase in narrowbodies, while regional jets and turboprops also making inroads – albeit slowly.

Data from Flight Fleets Analyzer shows that Boeing retains a dominant position in the market, accounting for 73% of the in-service fleet of passenger and freighter aircraft. 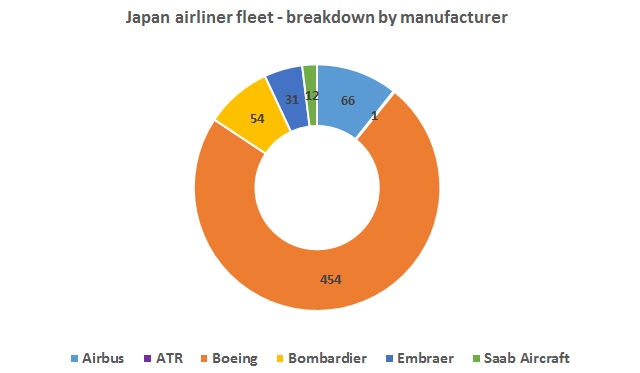 Nonetheless, the European manufacturer has gained in recent years, and on unit numbers of firm orders, Airbus and Boeing are neck-and-neck. Embraer is also delivering E-Jets to JAL unit J-Air. Down the track the Mitsubishi Regional Jet will also start delivering to both JAL and ANA. 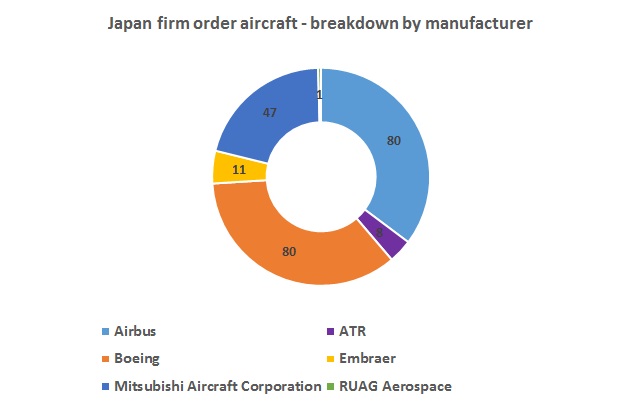 Airbus is, of course, no stranger to the Japanese market, with ANA taking its first A320s in 1991. More recently, the carrier placed orders for seven A320neos and 26 A321neos, and last year even three A380s. JAL started to signal a shift away from Boeing in 2013, placing an order for 31 A350s that will be delivered from 2019.

Airbus has also made great strides in the budget market, with Vanilla Air, Peach and Jetstar Japan all operate A320 fleets, as well as the soon-to-be relaunched AirAsia Japan.

Airbus has had its share of challenges. The 2014 bankruptcy of budget carrier Skymark Airlines saw it cull its small A330-300 fleet. That event itself came months after Airbus terminated Skymark’s order for six A380s after it became clear that the airline would not be able to finance the delivery of its aircraft.

The Japanese aviation market has been undergoing major changes, which appear to have driven the changes in the fleet.

Low-cost carriers have secured a place in the market, plying both regional international and domestic routes. In addition, the expansion of the country’s high-speed rail network has changed the dynamic of the domestic market, while the slow economy has also dampened demand.

In response, both carriers have spoken in recent earnings seasons of optimising capacity. That has seen a number of routes move from types such as Boeing 747s to narrowbodies and smaller widebodies, such as 767s and 787s.

The bigger focus for both ANA and JAL, however, has been on the international market, which has driven their recent orders for new widebodies.

Both carriers were major 787 operators, with ANA the type’s launch customer. In August, it also became the first carrier in the world to operate 50 787s.

It has, though, been far from smooth sailing for the two carriers, which have had to contend with various issues around the 787s. Both airlines were affected by the battery issues that led to the worldwide grounding of the fleet in 2013, and have had their fair share of teething troubles.

Most recently, ANA announced that it would replace the Rolls-Royce Trent 1000 engines across its fleet after discovering issues with intermediate turbine blades on some of its 787s. JAL’s GE-powered 787s have also had some issues that have limited their use in icing environments.

In spite of those challenges, the aircraft’s suitability to long, thin routes has opened up new opportunities for both carriers. For JAL, the 787 has allowed it to launch services to Boston, Dallas-Ft Worth and San Jose. ANA has also opened San Jose services, and from February next year will also rely on its 787s to start a Narita-Mexico City service.

ANA also flies its 787s on a number of short-haul routes, both international and domestic. FlightGlobal understands that has caused some damage to the Trent’s intermediate turbine blades. Nonetheless, the carrier says that damaged blades were also found on aircraft that were used on aircraft that were flown on long-range routes.

Stepping up a size category, JAL and ANA have taken different tacks for their larger widebodies. ANA was an early customer for the 777X, placing orders for 20 777-9s. JAL, meanwhile, has hitched its wagon to the A350, having ordered 18 -900s and 13 -1000s. Those aircraft will start delivering from 2019, and will replace its older 777s.

But despite Japanese carriers previously being among the largest users of 747s, very large widebodies day in Japan appears to have passed.

ANA ordered three A380s earlier this year, which it said at the time will be used on Honolulu routes when they are delivered between 2018 and 2019. It has not indicated if it plans to add more of the type to its fleet.

The 747-8 has had some success in the market, but only in the form of the freighter variant. Nippon Cargo Airlines operates eight of the type and has a further two on order.