Network changes, ancillary fee increases and an upcoming fare structure overhaul are expected to contribute about $350 to $400 million in additional revenue for JetBlue Airways by 2020, as the airline says it remains on track in shedding structural costs by the same timeline.

The revenue initiatives - most of which were previously announced by the airline - are expected to result in a 1-1.5 point benefit to unit revenue for 2019, said JetBlue executive vice-president commercial and planning Marty St George at the airline's investor day.

About half of the up to $400 million in additional revenue will be generated by ancillaries such as baggage fees, loyalty revenue and the airline's travel products subsidiary, say JetBlue executives.

On the non-ancillary front, capacity reallocation in JetBlue's network is expected to add about $100 to $120 million of annual run rate revenue by 2020, says St George. This reallocation includes previously announced cuts in intra-west and short-haul flying, and the redeployment of capacity to more margin accretive routes like daytime transcontinental flights and service out of the focus cities of Boston, Fort Lauderdale and New York John F Kennedy. 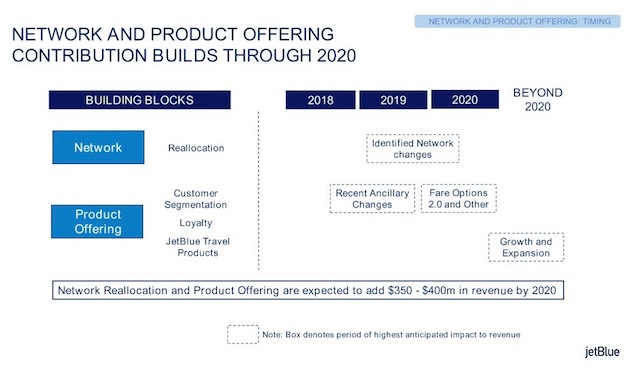 Further customer segmentation will play a key role in JetBlue's revenue initiatives from 2019, when it debuts a new fare structure that is currently in the works. Dubbed "fare options 2.0", it will offer three fare tiers including the airline's first fare category that is styled along the lines of the basic economy fare offered by US mainline carriers today.

Tentatively branded "Blue Save", the basic economy-like fare will be priced lower but come with restrictions on itinerary changes, seat assignments and boarding priority, the airline has indicated. The next fare tier, "Blue", will be similar to JetBlue's lowest fare category today. On the high end of the spectrum, JetBlue plans to roll out "Blue Save" which will replace the airline's current "Blue Flex" tier. 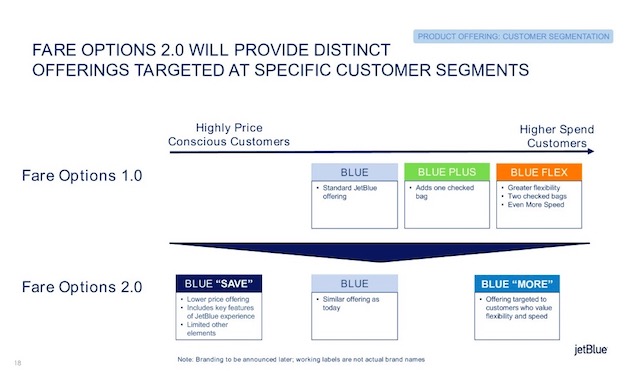 The airline says "Blue Save" will appeal to price-conscious travellers and help the airline remain competitive among rivals that have increasingly unbundled fares. But the carrier ultimately hopes that passengers will buy up to the new "Blue" fare, with JetBlue expecting the majority of the revenue from the fare structure overhaul to be contributed by such upsells.

JetBlue executives say the airline's current iteration of the "Blue" fare - its cheapest tier - is not adequately differentiated. The fare does not include a checked bag but allows for changes at fees that are similar with the more expensive "Blue Plus" fare.

The airline's vice-president for sales and revenue management Dave Clark says the current "Blue" fare serves two groups of passengers today - those who want the lowest fare and those who want more flexibility. Having to serve both groups with a single fare tier does not allow the airline to price it optimally, says Clark.

On the other end of the spectrum, only about 1% of passengers choose the most expensive "Blue Flex" fare, which is not optimal either. "We think the 'Blue More' offering will be much more effective and chosen more often [than] the current 'Blue Flex', it will be much more targeted and we probably can bring the price down a bit," says Clark.

Initial employee reaction to the planned fare changes has been positive, says JetBlue president and chief operating officer Joanna Geraghty. She points to staff reactions at Fort Lauderdale, where the airline operates a focus city and competes with hometown carrier Spirit Airlines, which offers a ultra low-cost product that is highly unbundled.

St George says: "I don't think there's any airline more experienced with competing with the ULCCs than JetBlue." Asked to comment on how some mainline rivals have "stumbled" with implementing basic economy, St George says JetBlue has spent some time observing competitors and how they experimented, and is confident that the roll-out will go well.

While JetBlue is eyeing more fare segmentation, it does not plan to further segment its product on board. In response to a question on whether JetBlue plans a premium economy product to sit between its Mint premium service and regular product, St George divulges that the airline at one point studied a product it calls "junior Mint".

"It was something that might be interesting for a secondary transcontinental market," says St George. The airline, however, ultimately did not pursue it after considering the operational complexities it would introduce.

JetBlue is eyeing incremental revenue as it continues to make progress on cost savings initiatives that it first unveiled in late 2016. Of the up to $300 million of expenses it aimed to slash by 2020, about $171 million has been achieved.

Work that has been completed include the majority of $100 to $125 million in cost savings on technical operations, such as long-term maintenance contracts, as well as $20 million of savings in distribution costs among others.

Among the other projects that remain uncompleted: A request for proposal for a new passenger service system, the negotiation of heavy maintenance contracts for the airline's Airbus A321s and Embraer 190s, and further work at airport check-in areas to provide self-service technology.

The airline is on track to hit its goal of a flat to up 1% unit costs excluding fuel compound annual growth rate for the period from 2018 to 2020, says chief financial officer Steve Priest. This, however, excludes the cost impact of the airline's planned transition to the Airbus A220 from the Embraer 190 in 2020. JetBlue previously said it expects to take on about $185 million in transition costs from 2019 to 2025, on top of one-off costs this year

In the first glimpse of its 2019 and 2020 cost guidance, the airline says it expects unit costs excluding fuel to be flat or grow up to 2% in 2019 on capacity growth of about 5-7%. The 2019 guidance is JetBlue's second-best unit cost performance forecast since 2007, says Priest. The guidance for 2019 includes the cost impact of a pilots deal which went into effect in August.

In 2020, unit cost excluding fuel is expected to decline by 0.5-2.5%, with capacity growing in the top half of a mid-high single digit range. The 2020 estimate includes the estimated cost impact from the introduction of the A220.

An ongoing cabin reconfiguration on the airline's A320s to add more seats will also benefit the airline's unit cost, note JetBlue executives. JetBlue has completed the work on 10 A320s, since it embarked on the programme earlier this year following delays. The reconfiguration will add 12 extra seats on the A320s for a total of 162.

JetBlue has said it hopes to have a dozen aircraft completed by year-end, with the entire A320 fleet reconfigured by end-2020.