South Korean airlines have orders and commitments for over 200 new jets in the next few years, accounting for almost two-thirds of their existing fleet.

Flight Fleets Analyzer shows that, collectively, the sector holds firm orders on 144 aircraft, options on a further 70, and a letter of intent to order a further 10 jets. The vast majority of those are narrowbody aircraft, reflecting most Korean carriers' focus on short-haul markets for growth.

As with nearby Japan, Boeing has traditionally been the dominant supplier of those jets, but that is changing. Airbus has gained an important foothold in the market, with flag-carriers Korean Air and Asiana Airlines operating A380s and A330s, while both have major orders in place for A321neos. 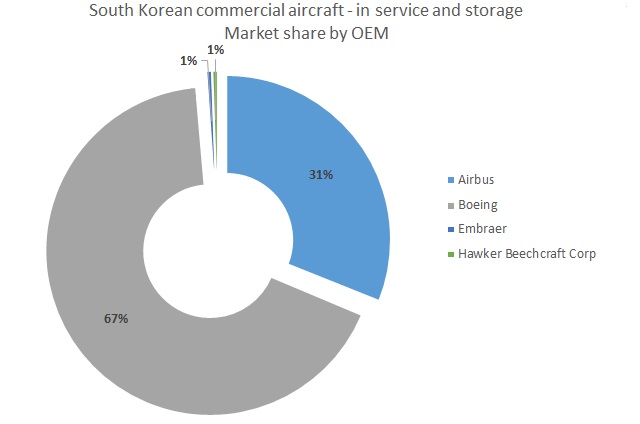 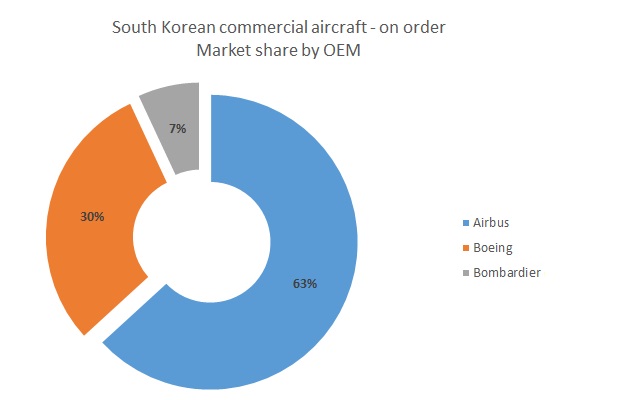 Airbus also looks set to make its first foray into the country's growing LCC sector next year, after securing an order for eight A320ceos from start-up carrier KAIR.

That is significant, given that the three independent low-cost carriers – Jeju Air, T’way Air and Eastar Jet – are large users of Boeing 737NGs, and have been adding more jets to serve what was, until recently, a burgeoning market between China and Korea. None of those carriers have yet indicated when they are likely to look at replacing their NGs, and if present experience is any guide, they will likely do so through leases, rather than direct orders.

But it is not only Airbus that is challenging Boeing's legacy. Later this month, Korean Air will take delivery of its first Bombardier CS300 and plans to have three in operation by the end of the year. It also holds options for 10, an LOI for a further 10 of the type – although it has given little indication if it will convert that into a firm order.

Curiously, the carrier’s firm order for 10 CS300s sits alongside orders for 30 Boeing 737 Max 8s (plus 20 options) and an identical number of A321neos, making it the only carrier to have ordered all three new-generation narrowbody types as future replacements for its 36-strong fleet of 737NGs.

"In the case of the A320neo and B737 Max 8, Korean Air plans to operate in medium-short haul such as Southeast Asia, China and Japan. For the CS300, we will introduce the aircraft to short-haul feeder routes with relatively small demand," the carrier tells FlightGlobal. 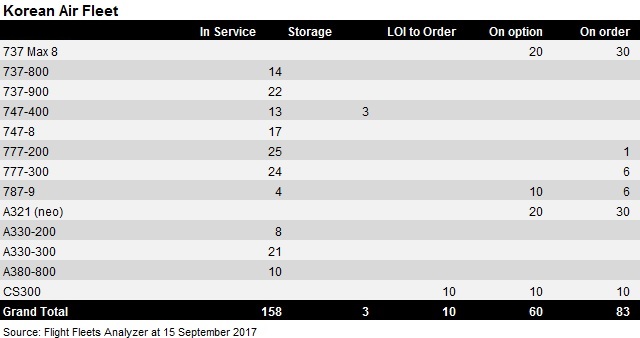 While it has orders for 70 new-generation narrowbodies, the carrier adds that some of those jets may end up at its low-cost affiliate, Jin Air, which operates 20 737-800s, as well as four 777-200s.

"We will closely evaluate the needs of aircraft for both Korean Air and Jin Air, and allocate accordingly," Korean Air adds.

Asiana Airlines, too, has set forward a major fleet renewal programme, which so far is based solely on Airbus products. In 2015 it ordered 25 A321neos, which will replace its seven baseline A320s and 20 A321s, as well as the four A321s operated by its budget unit Air Seoul. It has selected CFM International Leap-1A engines to power those aircraft, marking a shift away from the International Aero Engines V2500-powered A320/A321ceos.

Curiously, Asiana is the only airline in the world holding orders for the A350-800. Most other customers have either converted their orders to larger A350 variants or to the A330neo, leaving only a backlog of eight, Fleets Analyzer shows. Thus, it appears unlikely that Airbus will proceed with building the variant.

Asiana and Korean Air have both been major users of twinjets on long-haul routes, but four-engined aircraft still play a role in both fleets.

Asiana has six Rolls-Royce Trent 900-powered A380s in service, which operate on its services from Seoul to Barcelona, Hong Kong, Frankfurt and New York. Despite the small fleet size and general ambiguity around its fleet planning, the airline is insistent that “no more A380s will be delivered”.

Korean Air is also an A380 operator, with 10 Engine Alliance GP7200-powered aircraft in its fleet.

Unusually, the carrier joins Lufthansa as the only other airline to operate A380s and the competing Boeing 747-8 Intercontinental side by side. It has 10 747-8Is in its fleet, as well as seven 747-8 Freighters.

Korean Air would not discuss its reasons for operating both types with FlightGlobal, but schedules show that they overlap on one route: Seoul-London Heathrow. The A380s also fly to Los Angeles, Paris, New York, while the 747-8Is fly on a plethora of other routes, including Sydney, Singapore and Prague.

Most likely, the split of orders across both very large jets reflects Korean Air’s manufacturing relationships with both of the big airframers. It has an aerostructures and MRO unit, KAL ASD, which makes parts for both Boeing and Airbus.

Officially, the carrier has yet to decide on replacements for the 777 fleet, indicating that a future 777-X or A350 order could be in the offing. Nonetheless, some of the 777-200s are likely to face retirement in the coming years as 787-9s make their way into the carrier’s fleet. To date, it has taken delivery of two, out of an order for 10 787s.

"Korean Air’s B787-9s currently operate to destinations such as Toronto, Fukuoka [and] Taipei. We plan to introduce our B787-9 to long-haul routes such as Madrid in the future," the carrier says.

A330 DOMINATES IN MIDSIZE SEGMENT

Despite Airbus's limited penetration in Korea's narrowbody market, its A330 is the most popular midsize widebody, with Korean Air and Asiana operating 44 between them. All of those aircraft are powered by Pratt & Whitney PW4000 engines.

Overall, though, the fleet is relatively old, with Flight Fleets Analyzer showing the average age of A330s in Korea as 11 years. The oldest, a -300 operated by Korean Air, is over 20 years old, while it also operates the youngest example, aged just over two years. Asiana's A330s are younger, with an average age of just over eight years, while its oldest example is just under 13 years.

Both carriers use A330s primarily to operate services into Southeast Asia, to secondary points in Europe and on high-demand routes around north Asia.

Korean Air and Asiana both tell FlightGlobal that they do not have any firm plans to replace their A330s in the short term, which could set up some interesting future competitions. While Korean has 787s in its fleet, that type's focus on long-haul services may mean that it is not the natural successor to the A330.

When asked by FlightGlobal about its plans for its fleet, Asiana Airlines would only say that it “will continue to enhance its mid/long-haul aircraft and the delivery timelines are still yet to be determined”.

Regional aircraft are also very thin on the ground, reflecting the strength of the country’s train network and density on its core routes – such as Seoul-Jeju and Seoul-Busan – necessitating using 737s and A330s rather than regional jets.

A new regional start-up, Air Pohang, has also taken delivery of a CRJ200, but that aircraft remains in storage. 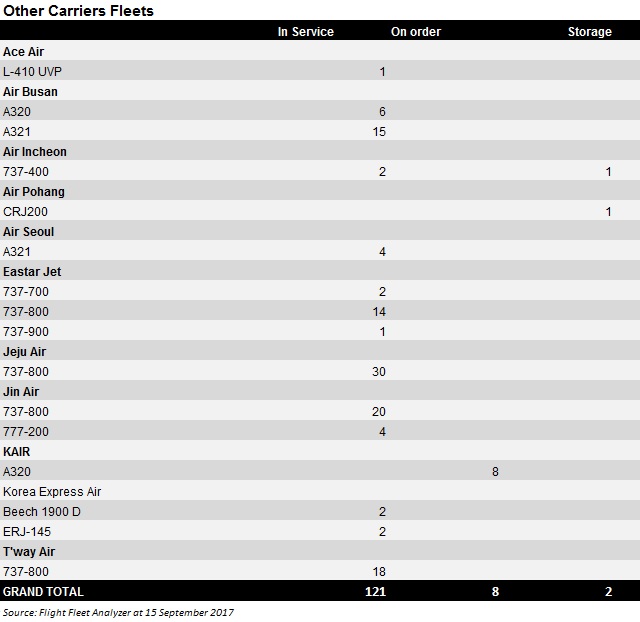