As World War II raged, US Air Force Plant 4 cranked out 17 B-24 Liberators a day for the Allied forces. The Lockheed Martin plant in Ft Worth, Texas went on to be the birthplace of the F-111 Aardvark and the F-16 Fighting Falcon. Today, the dwindling F-16 line occupies a smaller facility next door known as the Falcon’s Nest, dwarfed by the colossal space, several football fields long, that is now the F-35 Joint Strike Fighter production line.

As the production line has matured, Lockheed has streamlined the construction of the three F-35 variants at Ft Worth. Movement of sub-assemblies by crane has gone; now, rail lines connect assembly stations and fighter tails glide above the factory floor. Lasers sterilise fasteners and precision-align parts from disparate international suppliers. Since the first production F-35 rolled out in 2009, touch labour on the aircraft has fallen by 75%.

Highlights of a FlightGlobal tour of the Ft Worth facility include a look inside the toolbox drawers that electronically track each spanner and drill. An automated drilling machine bores 10,000 holes into the F-35’s outer mould line – over two, 8hr shifts it puts 1,500 holes in the forward fuselage alone, a feat that took about two weeks during F-16 production. The F-35 line is to its F-16 counterpart as the digital age is to the analogue past. 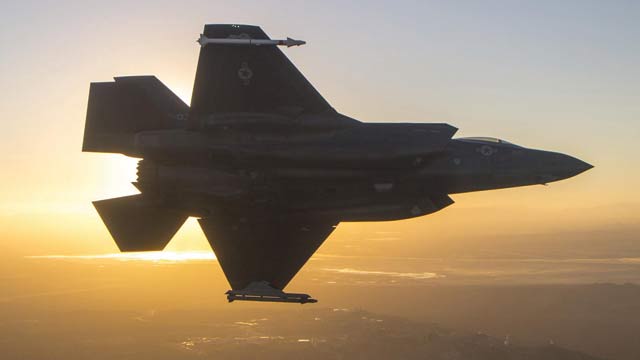 “When you think about the F-16, there was no digital thread, there were paper drawings,” says F-35 production vice-president Janet Nash. “The F-35 … digital system has the part numbers, has the size, has the tolerance, materials, the specs, all linked digitally, so that it can flow out to the suppliers digitally.”

Lockheed will mark a new era in 2019 when it expects to achieve a monthly build rate of 17 F-35s, almost seven times the pace of any previous stealth fighter programme. In 2017, Ft Worth should make about 67 jets, reaching a 100 rate during 2018. Production will peak at about 178 fighters a year in 2023, Nash says. In the next three years, Ft Worth will double its workforce.

The Ft Worth facility is expanding its capacity to produce a maximum of 17 fighters a month, although current schedules show Lockheed reaching 15 to 16 a month, Nash says. At the same time, the production facilities in Cameri, Italy will build two jets a month for the Italian and Dutch air forces. Mitsubishi Heavy Industries’ facility in Nagoya, Japan will build one jet a month for the Japanese air force.

The EMAS machine allows the seamless integration of three mate joints in the F-35’s structure, bringing together a centre fuselage from Turkey or California, a forward fuselage from Ft Worth and an aft fuselage from the UK. A hair’s-breadth gap between any of these components would give away the F-35’s profile on radar. Those sections have to be joined, laser aligned and then pulled apart to examine tolerances, before cleaning and reassembly.

In another departure from legacy production, Lockheed has employed a flexible overhead gantry machine to make possible the aircraft’s tight tolerances. The towering machine mills out the inner mould line of the forward fuselage, rather than stamping it out of metal. “The width of that seam is absolutely critical. We take over 11,000 measurements as the jet goes down final assembly to measure that gap and make sure it’s exactly correct before it leaves,” nash says.

But while these extraordinary measures may speed up output and make near-perfection possible, they haven’t entirely eliminated problems. In September 2016, the US Air Force grounded 15 F-35As after a fuel line glitch caused insulation inside the avionics cooling lines to crumble. A Lockheed supplier had used the wrong coating for the insulation, which deteriorated when it met fuel. The supply chain issue affected a further 42 fighters on the production line.

Lockheed delivered 45 aircraft in 2015 and was supposed to deliver 53 by the end of 2016, but repairs to the polyalphaolefin coolant tubes slowed production. Nash says repairs on the 45 already delivered aircraft should be complete by the end of 2017, and delayed deliveries will be recovered at the beginning of 2018. “We’ll be back on plan next year.”

While Lockheed plays catch-up with its production goals, industry partners and the government are still striving to drive down the platform’s operational and sustainment costs. The US Department of Defense unveiled a “blueprint” for production affordability at last year’s Farnborough air show, and has now extended it by two years, targeting a per-aircraft price of $85 million. In 2015, Lockheed’s price target for 2019 stood at $80 million.

The blueprint programme has transitioned several developmental technologies to the production line, including a new laser ablation system that rolled out of the laboratory last March. The laser surface cleaning system began as an industry technology, but Lockheed patented the laser head for the specific F-35 configuration. The company is already eyeing how it could adapt the system into a smaller unit to assist with sustainment in the field. 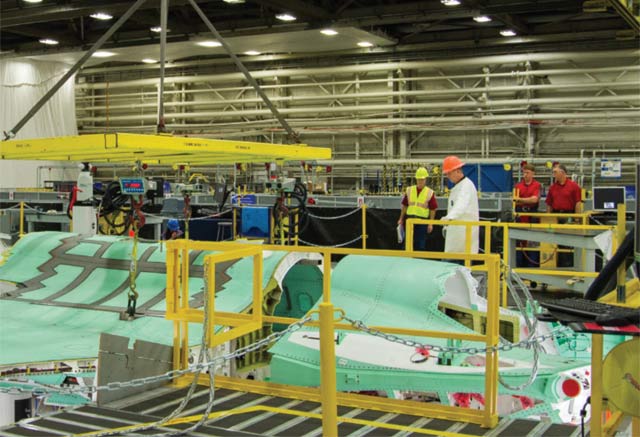 The Fort Worth assembly line is the length of several football fields, and makes heavy use of technologies including laser alignment

The machine sterilises a nut plate – a fastener that functions like a new-age rivet – to pristine condition. Previously, the surfaces on thousands of nut plates were sanded manually and cleaned with a chemical solvent to assure perfect adherence, Nash says. While the earlier process took four workers to prep one wing in four hours, laser ablation enables workers to prep the surface in two hours and then install the nut plates. Laser ablation hasn’t cut down the number of workers needed to install the nut plates, but has reduced quality issues downstream.

“The savings is beyond this area. We don’t have to do repairs and fixes down the line,” Nash says. “So it improves with defect reduction because they appear perfectly first time, every time.”

In the future, Lockheed could develop a new kind of fastener that doesn’t require ablation, says Don Kinard, a senior technical fellow at Lockheed handling the F-35 fighter production system. Kinard is charged with finding cost savings for the F-35 line, but has his eye on forward-looking technologies such as augmented reality that could streamline future fighter production.

“What I’d really like to do is install fasteners from one side with a robot, rather than having two people at a time doing that,” he says. “It would be a blind fastener, it would install from one side and then when you twisted it, torque it, it breaks off the stem and clamps the structure.”

On a radar map, a 747 would appear the size of a hot air balloon and an F-16 would look like a beach ball. Drill down to legacy stealth aircraft and Lockheed’s F-117 Nighthawk would show up as a golf ball while an F-22 Raptor might appear as a pea. With the F-35, Lockheed is getting down to pebble size, according to Robert Wallace, senior manager for F-35 flight operations.

Wallace, a former chief of low-observability for the US Air Force’s B-2 bomber, says the F-35 has leveraged LO qualities from the bomber – but he could not elaborate on specifics.

Pilots will see a more advanced low-observable signature on the F-35 versus the F-22, but it’s the maintainers who see the greatest leap in durability. Each time a fighter returns from flight, maintainers must bring the aircraft’s stealth signature back to its original fidelity. But a fighter confronts more demanding missions than a bomber, pulling 9g while flying from hot, desert environments to high, cold altitudes.

The secret to an aircraft’s low-observable signature doesn’t lie in a stealthy skin alone but in the shape, Wallace adds. Just one week before Donald Trump called Boeing to price a Super Hornet against the F-35, Wallace refuted a repeated claim that the F-35 could be substituted with a less expensive fighter covered in a stealth coating.

On the F-35, the smooth surface at the nose begins to give way to a serpentine shape with a large bump protruding before the engine intake. That bump is the first line of defence against radar, although Lockheed has also buried the F-35’s engine in the back of the aircraft to ensure its blades are hidden.

While the shape is created when the centre fuselage is made, the coating that completes the LO system comes into play with help from a machine called Thor. Named after the Norse god of thunder, the new robot has revolutionised the application of stealth coating on the Lightning II.

In the past, Lockheed coated the inlet bump through a repetitive process that involved spraying, drying and manual measuring, followed by more spraying. Where it once took Lockheed several hours to apply coatings near the inlet ducts that give the F-35’s inlet its low-observable characteristics, the Thor robotic system injects coatings directly on to the aircraft. The rest of the jet’s coating is applied by three other robotic spray devices.

Rick Luepke, a technical fellow at Lockheed and Thor’s inventor, began the project with government seed funding but developed the tooling and processes with both the government and Northrop Grumman, as part of the blueprint for affordability initiative. The blueprint initiative invested $742,000 into Thor and Lockheed estimates the robot will save $6,000 per jet and $27 million over the life of the programme.

Lockheed rolled out Thor a year ago and the machine has halved the time to finish the LO moulding on the inlet, Kinard says. The robot is capable of finishing one side of the fighter at a time, but Lockheed is adding a second machine, aptly named Loki – another Norse god and now a Marvel Comics character who is a sometimes enemy of Thor – to finish both sides simultaneously.

The machine uses three cameras to scan a 3D image of the aircraft, which allows the robot to locate the aircraft surface for the injection process. Once the injection finishes, the system shuts down and waits an hour to allow the material to gel. Thor then heats the injection tool to 65.5˚C (150°F) and cures the low-observable material on to the aircraft.

The robot then scans the inlet once more and compares the initial and final scans to derive the thickness of the material. A colour map is projected on to the aircraft’s surface, to determine whether an area is too thick or thin. Thick areas appear red, thin coatings show blue and intolerance spots are green.

Lockheed is currently working on a new optical scanner, which will update the colour map every minute and a half, Kinard says.

Luepke adds: “We’re using this colour map as a visual for the finishers to be able to sand what they need to sand to get the coating to the final tolerance. But what we’re working toward is a real-time update on the colour map. As they sand it turns colour.”

The current scanner must take several overlapping shots of the inlet to scan the entire area. The new system will be able to scan the same area in a single shot. That will slash scanning time from 20min to 90sec, Luepke says.

Lockheed could not have even approached concepts like Thor with previous production lines. By the time Lockheed delivered its final F-22 to the USAF in 2012, the company had produced 187 of the fighters. That’s a sizable fleet, but a paltry number compared with F-35 production.

“With F-35 being a long production run, this kind of stuff is possible,” Kinard says. “The fact that we have all these aircraft on a single assembly line allows us to apply the technologies to all the variants and they can all share that learning.”