The Santiago-based airline group will now grow capacity by 4-6%, down from a range of up 5-7%.

LATAM encountered a challenging second quarter, which is seasonally usually the toughest quarter for Latin American airlines. Aside from the industry-wide difficulty of higher fuel prices, the airline's operations were impacted by a Brazil truck drivers strike and a Chilean cabin crew strike, which resulted in a $38 million hit to its second-quarter results.

Operating profit slid 86.6% to $6.48 million, and the airline ended the period with a net loss of $114 million, although this was an improvement upon the $138 million net loss it reported a year ago.

The continued grounding of a part of the airline's Boeing 787 fleet also placed pressure on the carrier's long-haul international operations. LATAM says six of its 24 787s remain out of service, awaiting preventive engine maintenance from Rolls-Royce.

Mirroring the concerns raised by other Latin American airlines, LATAM saw demand weaken for international flights in Argentina and to a lesser extent Brazil.

Faced with this multitude of challenges, the airline has slashed its fleet commitments for the remainder of the year by $207 million to $507 million, with the addition of fewer aircraft to its fleet.

It has postponed the delivery of two Airbus A320neos and two Airbus A321neos, and extended subleases for two Airbus A350s to Qatar Airways by another two years. The aircraft were initially scheduled to return to LATAM this year. 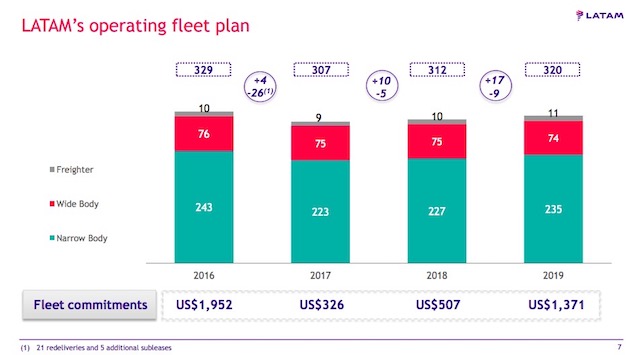 With the changes, LATAM will receive just one A350 later this year and will convert a Boeing 767-300ER into a freighter. The airline will also return five aircraft in 2018, ending the year with an operating fleet of 312 aircraft.

Fleet commitments will ramp back up in 2019 to $1.37 billion, with the airline expecting deliveries of 16 new aircraft including three that were postponed from 2018. LATAM will return eight aircraft in 2019.

LATAM executives indicate, however, that the airline could cut 2019 fleet commitments as well, with chief financial officer Ramiro Alfonsin saying that reductions are "very probable".

"We’re increasing the utilisation of our aircraft… and this is allowing us to grow with fewer aircraft," he said on an earnings call on 21 August. "We believe that we can further optimise utilisation going forward in 2019. So maybe you will see a reduction of these fleet commitments for 2019 going onwards."

Demand from Argentina was weak in the second quarter for many Latin American airlines, and LATAM was no exception. Unit revenue in LATAM's domestic Spanish-speaking market segment declined 3.5% in the quarter, partly due to the depreciation of the Argentine peso.

"The places that are most challenging today is basically to the Caribbean, because of high sourcing of demand from Argentina," says LATAM's senior commercial vice-president Roberto Alvo.

Argentina contributes about 11% of LATAM's revenue, he says.

To a lesser extent, Brazil also posed some challenges in the second quarter, with Alvo pointing out a "significant increase in capacity" between the USA and Brazil in the past few months.

US-Brazil capacity was up 12.7% year on year in the second quarter, FlightGlobal schedules data shows.

Outside of the weakness in Argentina and Brazil, LATAM sees stable and solid demand in Europe, the USA and other Spanish-speaking countries in South America.

The airline has also grown its point of sales in the USA and Europe, increasing from 15% in the second quarter of 2017 to 18% this second quarter, says vice-president of corporate finance Andres Del Valle.

"One of the advantages we have is the diversification of point of sale," says Alvo. "We have been, in particular, increasing our sales and we’ve done this on purpose in markets that we’ve seen [as] more healthy as a way of counter-balancing [the decreased demand] in particular in Argentina and to some extent in Brazil."