ANALYSIS: MH-60R Romeo comes of age Down Under

When the Royal Australian Navy (RAN) became the second operator of the Lockheed Martin/Sikorsky MH-60R "Romeo" helicopter in 2013, it represented a major step up in capability and training for its combat aircrews.

Acquired via the US Foreign Military Sales (FMS) mechanism, Australia’s 24 Romeos replaced 16 obsolescent S-70B-2 "Bravo" Seahawks, and came backed up with a comprehensive training, logistics and support package from the US Navy (USN) and its industry partners.

As the Romeos brought a big jump in capability and technology, the navy also moved away from its previous approach of having all training conducted within an operational squadron. Instead, it now has 725 Sqn dedicated to training, and 816 Sqn as its operational unit.

Often referred to as "the schoolhouse", 725 Sqn is based at a dedicated facility at HMAS Albatross in Nowra, New South Wales, around 200km (124 miles) south of Sydney, where it trains Romeo pilots, aviation warfare officers, sensor operators and maintainers to provide the key aerial anti-submarine and anti-surface warfare capability for the RAN's fleet of frigates and destroyers. 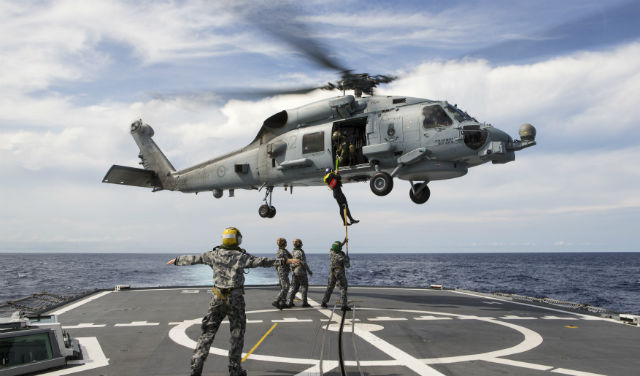 Commander Stan Buckham, 725 Sqn's commanding officer, says it takes around 12 months to train an aircrew member to operate the Romeo, which reflects the complexity of the platform, the wide variety of missions it is involved in and the operating environment it works in.

"We train them up and we send them to sea, so it is all-important that our training is rigorous enough to ensure they meet the standard to do the job at sea – which, to tell the truth, could be in combat," he says.

Most of the syllabus for 725 Sqn's training programme is similar to that of the USN, albeit with some changes to accommodate the different way that the RAN operates its rotorcraft. As an example, Australia's Romeos are crewed by a single pilot, with the lefthand cockpit seat filled by an aviation warfare officer who focuses on tactics, and a sensor operator in the rear. In use with the USN, both front-seaters are pilots, with one taking responsibility for tactical operations.

Buckham says the changes are around the context that the RAN operates in, but the learning objectives are the same as the US curriculum. The two services use the same terminology, systems and platforms, which has boosted their interoperability, he notes.

"The beauty of being in lock-step is an Australian crew in an Australian helicopter can fly with an American crew and achieve that same mission. Same language, same weapons systems – it is plug and play," he says.

In embracing the USN's system of training, the RAN made a quantum leap in its use of simulators and synthetic training aids, and its involvement with industry. 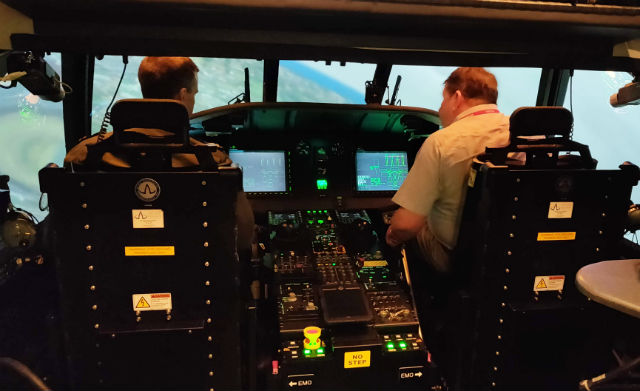 Alongside this equipment are a number of maintenance trainers, including two built around former USN SH-60B airframes that allow a number of mechanical, hydraulic and avionics faults to be simulated, giving the Romeo's maintainers hands-on experience in a training environment. There are also separate aids for weapons loading, winch and gunnery training. 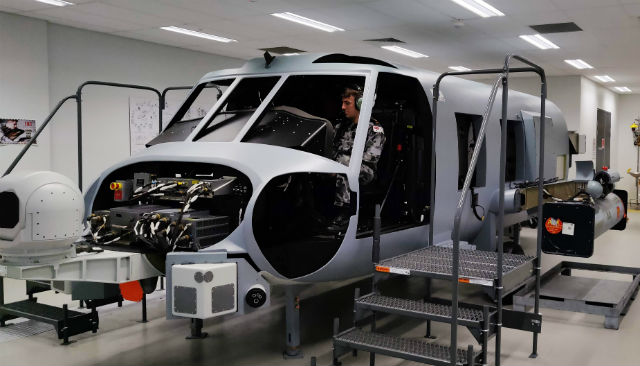 Captain Grant O'Loughlan, deputy commander of the RAN's Fleet Air Arm, says the involvement of CAE has been vital to enabling the service to gain the most out of the Romeos and the crews that operate them.

“[Having] CAE with our simulators, support staff and instructors, they are a fundamental input for us," he says. "Without them we could not train our crew on time and to the level that we require to get them to sea.”

Buckham says that for a crewmember that has never flown a Seahawk before, around 70% of their training is done in the simulator, with the remainder performed using the eight MH-60Rs that are allocated to 725 Sqn.

"We’ve now got an unparalleled level of live, synthetic and virtual training to make sure our men and women are provided the best training that we can afford, or that we have knowledge of," says O’Loughlan.

At the end of 2018, the RAN's Romeo fleet reached full strength with eight flights stood up: each comprises a helicopter, two sets of three flightcrew and 11 maintainers, which will embark on a ship for a deployment that may stretch from nine months to two years in duration.

Buckham says, however, that the navy is still evolving and improving its training, as well as the capabilities the Romeo offers. "We are still trying to evolve and understand what this beast of a machine can do – it is awesome," he adds.

That approach to training is allowing the RAN to get the most value out of its Romeos, which are now an essential part of its battle structure.

"What it brings to the fight is unparalleled, and ships do not want to go to sea without their embarked maritime combat helicopter. It gives the commander so much choice, opportunity and capability that is fundamental to the way we operate in the RAN today," says O'Loughlan.

The Romeos returned a dipping sonar capability to the RAN’s helicopter fleet, with the rotorcaft sporting a Raytheon AQS-22 low frequency sonar, in addition to being able to carry and deploy a range of sonobuoys. 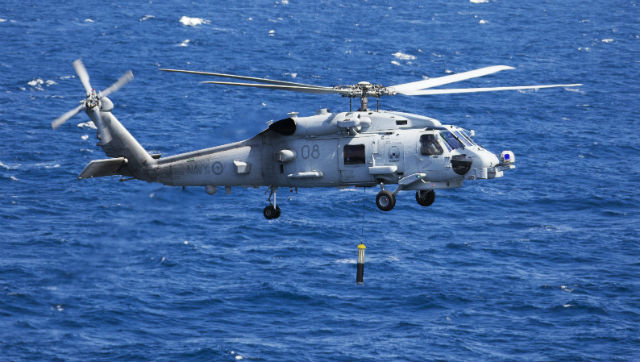 On the weapons side, the type has two pylons that can carry up to eight Lockheed AGM-114N Hellfire missiles or Mk54 lightweight torpedoes. Work is also under way to integrate BAE Systems' Advanced Precision Kill Weapon System laser-guided rocket. From the door mount, it can also carry GAU-21 or MAG 58 machine guns.

Together, the systems and weapons of the Romeo have become a valuable tool for the navy when embarked on a frigate or destroyer, says Buckham.

"The helicopter is a system on that ship, in that ship, that extends its capability. That is why every CO [commanding officer] of a ship wants an MCH [maritime combat helicopter]. They want that capability – it is a force multiplier."

Future developments are also on the way. Upgrades are likely to come down the track, given that the USN plans to keep its Romeos in service out to the 2040s. Australia will gain access to these upgrades through the FMS programme.

While there is a perception that being tied to the FMS model could be limiting, O'Loughlan says the benefits far outweigh the disadvantages, especially considering its past experience with the Bravo.

"The problem with our last Seahawks was that it was a bespoke design, 16 airframes only. Nobody else in the world operated them, so it became very costly for us to maintain and upgrade," he says. "We are now tapped into a system of around 500 [Romeo and MH-60S Sierra] airframes. We are able to tap into that and the engineering support and logistics, and that makes our lives much easier."

There is also a mechanism for the USN to certificate "Australian-unique modifications" to the helicopter if required. One of those has seen its examples fitted with instrument landing systems: something that the USN is now planning to retrofit to its own Romeo fleet.

For now, however, the RAN stresses that it has a co-operative partnership with the US service on the type, which as the prime user also has staff stationed at HMAS Albatross, and they are in constant dialogue.

Buckham says that industry and USN support has allowed the Romeos and their crews to become a key part of the RAN in a relatively short amount of time. "It wouldn’t work any other way," he notes.