For decades, the United States has been by far the largest contributor to the NATO’s military strength. Its budget dwarfs those of all the other nations added together, and the US has long sought to have its partners pay more towards the cost of the alliance. Now, President Donald Trump has said that if NATO nations want to be assured of US support in a crunch, they have to pay their way.

The increasing calls for more spending follow a declaration by NATO’s leaders at their meeting in Newport, Wales, in 2014 that any nation not meeting the 2% of GDP benchmark should aim to do so within a decade and increase defence expenditure in real terms as their GDPs grow.

Of NATO’s 28 nations, only five – the US, Estonia, Greece, Poland and the UK – are generally held to meet the 2% level, although this measurement depends on how you define defence expenditure. 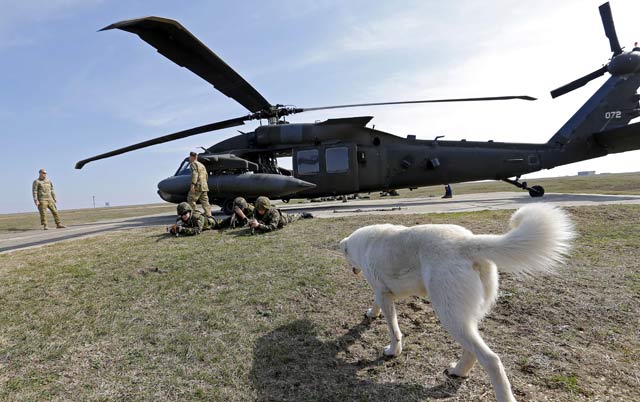 A US Army UH-60 Black Hawk, shown during an alliance exercise staged in Romania, March 2017

According to the Military Balance 2017 yearbook published by the International Institute of Strategic Studies’ (IISS) in London, in 2016 only two of the 26 European members met the 2% target: Greece and Estonia. For the remaining 24 states, the average percentage of GDP allocated to defence was just 1.2%.

The 2008 economic downturn did not help defence budgets. Following the 2010 UK general election, the Conservative-Liberal Democrat coalition government instigated a painful Strategic Defence and Security Review, which led to major cuts including the scrapping of the RAF’s entire BAE Systems Harrier force and the fleet of Nimrod MR2 maritime patrol aircraft, as well as its planned Nimrod MRA4 follow-on.

The government eventually declared a “black hole” in the defence budget – too many programmes chasing too little cash – to have been filled. In the past 18 months, however, fears have increasingly been voiced by think-tanks and retired senior officers that the problem of unfunded defence commitments has again reared its head.

“Defence always has the capability to come back and bite you,” notes Douglas Barrie, senior fellow for military aerospace at the IISS. This can be compounded by what is known as the “conspiracy of optimism”, by which the Ministry of Defence, industry and armed forces minimise the announced cost of future procurement projects to maximise the chance of gaining approval for them from the UK’s finance ministry.

“Looking ahead, it does look as if there are challenges in squeezing the current equipment programme within the financial restraints that we have, even if we do see an uptick in defence expenditure at the moment,” comments Barrie.

More widely, he says, “Part of the problem of the whole NATO 2% calculation is that it focuses on the wrong thing.” Rather than looking at the input – the amount a government puts into its defence budget – “everybody needs to be focused on the output”, or what a country’s defence budget actually buys. “Two percent spent badly is useless compared to 1.5% spent really well.”

Also querying the significance of the 2% benchmark is Dr Nan Tian, researcher in the arms and military expenditure programme at the Stockholm International Peace Research Institute (SIPRI).

Like Barrie, Tian acknowledges that calculating the existing level of military expenditure of individual nations is difficult. SIPRI classes only the US, Estonia, France and Greece as meeting the 2% benchmark, with the UK and Turkey at about 1.97%. Some are far below it; Belgium, for example, would have to virtually double its defence budget to meet the NATO target.

The usual motive given for increasing defence spending in Europe is the perception of increased Russian military activity over the past decade and the need to react to that. However, SIPRI’s calculations are that European NATO (ie, minus the US and Canada) spends $254 billion annually. Russia, by contrast, spends just short of $70 billion. “It’s a very difficult case to justify that you should be spending more,” says Tian.

The 2% benchmark is a purely arbitrary figure, he adds. Like Barrie, he makes the point that a country’s annual defence budget doesn’t necessarily translate to an equivalent output, namely security. Greece, for example, is one of the highest spenders in NATO, but a large percentage of its defence budget goes on pensions and salaries, rather than weapons.

The difficulty of defining just how effective a nation’s defence budget is can be seen in the case of Canada. In terms of a share of GDP, Canada comes 23rd in the NATO “league table”. But the actual monetary value of its annual defence budget – around C$20 billion ($14.8 billion) – puts it in fifth position in the alliance. “We really feel that we’re doing our share,” Canada’s foreign minister Chrystia Freeland said in March.

Tony Battista, chief executive of Canada’s Conference of Defence Associations Institute, says that it makes sense for NATO nations to work towards meeting the 2% GDP aspiration. Canada’s Standing Senate Committee on National Security and Defence has concurred that the nation should aim for that target by 2028.

However, says Battista, “From a Canadian perspective, what that means in actual dollars is that in 11 years that will be a budget of C$55.4 billion. That means a tripling of our defence budget in 11 years. It would be almost crippling from a financial point of view. How can you justify it in an open democracy…when there are so many pressures in other programmes?

“The response is that it’s practically impossible.”

What he believes should happen is that every NATO nation currently below the 2% GDP level should make “clear and progressive moves” towards that figure, to show genuine intent in improving their defence postures. “As long as we make progressive improvements that are beyond the inflation rate, then we see that there’s some seriousness there.”

Canada’s major defence aerospace problems at present revolve around its ageing F/A-18 Hornet fleet and whether it should be replaced by the Lockheed Martin F-35 Lightning II or whether an interim fleet of Super Hornets should be acquired.

The CDA Institute, says Battista, believes that foregoing the Super Hornets and opting for a competition to find a replacement type by the mid-2020s is the best course. That would save the estimated C$5-7 billion the Super Hornet fleet would require, together with the inevitably higher maintenance and sustainment costs a mixed fleet would bring.

Given the UK’s escalating defence commitments, “You do wonder if there’s going to be a mini strategic defence review post-election,” says Barrie. The UK goes to the polls on 8 June. “Alternatively, there could be a closer look at the various sets of figures to determine if a defence ‘black hole’ actually exists and, if so, how big it is and whether some defence programmes have to be reshaped to cover it.” 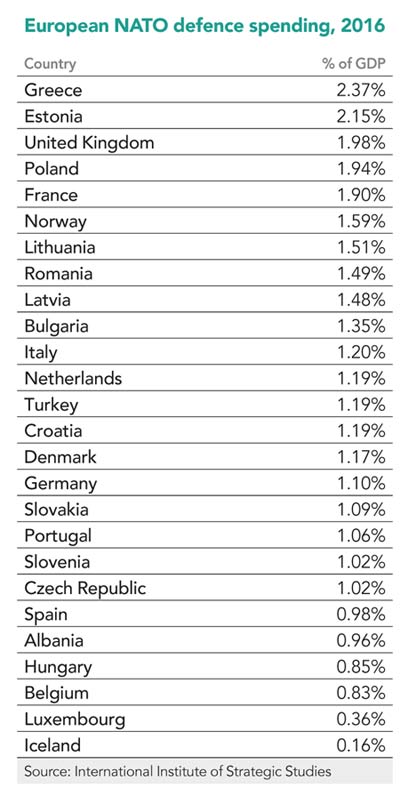 In Europe more widely, an increase in defence budgets can be seen in some nations: “It’s not huge, but the decline certainly seems to have stopped, at least in key states and there’s a slow movement upwards again,” says Barrie.

“It’s not going to happen overnight and not everyone will meet [the 2% figure].”

One nation well below the 2% figure is Germany, which currently spends around 1.1% of GDP on defence. The German government has said it will aim to get to the 2% mark, but not before 2025. However, given the size of Germany’s GDP, even a modest rise towards that level would equate to a considerable sum, notes Barrie.

One hindrance in Germany increasing its defence spending could be a lack of skilled personnel, suggests Prof John Louth, director of defence, industries and society at the UK’s Royal United Services Institute think-tank.

He says the country is around 1,400 personnel short in its procurement function after several years in which recruitment has been frozen. This has led to a shortage of skilled staff such as lawyers and project officers.

There are some areas where relatively modest improvements in NATO nations’ expenditure would bring disproportionate benefits. More air-to-air refuellers are badly needed and even the recent announcement that the Netherlands and Luxembourg will pool their finances to fund just two new Airbus A330MRTT multi-role tanker-transports is welcome, comments Barrie: “As long as you can harness these collectively, it gives you a bit of capability.”

Louth agrees that improving air-to-air tankering would require “a relatively modest investment”, but says some structural issues would have to be worked out: “Is it a NATO capability or European Union capability? All those things have to be discussed.”

Louth believes that NATO nations will also have to start thinking about how they respond to fifth- and sixth-generation fast jets, whose technologies represent a real jump compared to those in service today. This could be a substantial burden on future budgets: “If you decide to upgrade, that’s a serious investment.”

Although the cost of the F-35 is starting to drop as production ramps up, it is still sufficiently high for nations to be faced with buying increasingly small numbers of such “exquisite technologies”. That raises the question of when quality, no matter how high, starts to lose out to quantity. “Fantastic though these assets are, they can only be in one place at a time,” notes Louth. “And if they’re lost, they take an awful lot of time to regenerate.”

This has led to some people favouring a “high-low mix” of small numbers of high-technology aerial assets buttressed by larger quantities of simpler aircraft. However, if the pace of technological change moves on very rapidly, the simpler assets may simply become obsolete, Louth argues: “Whether we like it or not, NATO is led by the US and that’s a high-tech country. The US is very aware that advantage comes from technology as well as numbers.” So, pressure on budgets is likely to continue.

The complexity of modern aerial weaponry soaks up huge amounts of funding and sometimes this is arguably unnecessary, Barrie believes. All air arms now want precision-guided munitions and in recent conflicts, such as the Libyan civil war, he says it is difficult to find a single example of “dumb” weapons being employed against ground targets. Better matching of weapons to targets could give countries more “bangs for the buck”, he suggests.

The main focus of US interest in recent years has increasingly switched to the Pacific rather than Europe. Could European NATO nations cope with a significant incident on their own? Any such major incident would be most likely involve Russia, but “If you look at the Russian air force now, it’s not the Soviet air force by any stretch of the imagination”, comments Barrie.

“You can’t ignore it, but be realistic about it. The Europeans have enough capability there to make anyone pause for thought.”