For nearly 16 years, the US Navy’s future aircraft fleet had been set in stone. In 2001, the US Defense Department had settled the debate over which contractor would go on to build the Joint Strike Fighter, the jet that would meet the high-end fight for the US Navy, Marine Corps and Air Force. Once Lockheed Martin’s F-22-derived X-35 beat Boeing’s X-32, with its cheerful chin-mounted air intake that garnered the aircraft the saucy nickname “the Monica,” the three services appeared married to the jet.

The navy laid plans to create a mixed fleet of fourth-generation Boeing F/A-18 Super Hornets and carrier-capable, fifth-generation Lockheed F-35Cs that could lead the service into both low-end and sophisticated fights into the 2040s. The navy and US Marine Corps committed to buy 260 F-35Cs and planned to reach initial operational capability by 2018.

Changing political tides, operational environments and budget constraints may have swayed the navy’s aircraft procurement priorities over the early millennium. But the service’s plans ran aground on 21 December 2016, when then president-elect Donald Trump fired off a tweet: “Based on the tremendous cost and cost overruns of the Lockheed Martin F-35, I have asked Boeing to price-out a comparable F-18 Super Hornet!”

Call it the tweet that launched a thousand ships, or at least sent the nation’s top defence aviation executives into a tailspin. Lockheed stock took a brief hit following the tweet, but the news left both Boeing and Lockheed scrambling. For the next month and a half, Lockheed chief executive Marillyn Hewson and her Boeing counterpart Dennis Muilenburg made stops at Trump Tower in New York. Both meetings yielded discussions over fighter aircraft. With a stroke of Trump’s keyboard, the prize for F-35 appeared to be back in play.

One week into Trump’s administration, his new defence secretary James Mattis ordered an immediate review of the F-35 programmes. The memo also considered Boeing’s F/A-18 as a carrier aircraft alternative to the F-35C, which accounts for the smallest share of Lockheed’s programme of record. Like the F-35C, the Super Hornet requires a catapult to launch from a carrier.

“In parallel, the deputy secretary of defence will oversee a review that compares F-35C and F/A-18E/F operational capabilities and assess the extent that the F/A-18E/F improvements (an advanced Super Hornet) can be made in order to provide a competitive, cost effective, fighter aircraft alternative,” Mattis wrote. 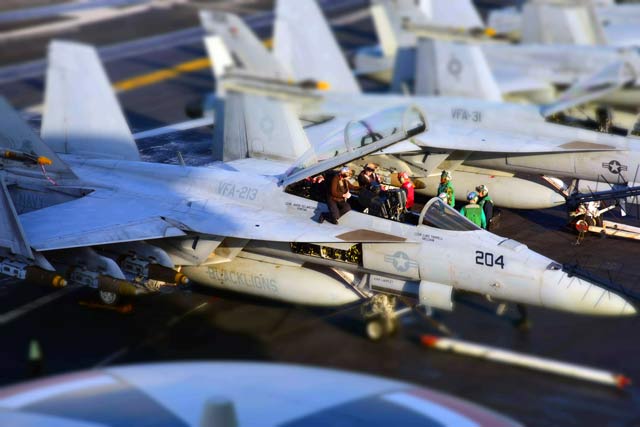 Whether Mattis’ review represents a true comparison of the F-35 and the F/A-18 or a gambit to force Lockheed to cut the price is still unclear. When asked in January if Trump’s tweet had disrupted the Navy’s aviation plans, chief of naval operations Adm John Richardson said: “The F-35 has certainly had its trials. We’ll see where the industrial base can come with price, which I think was the real impetus for that transition. We need that capability and we need to get it at the best price we can. We also need the Super Hornet, so that’s our strategy going forward.”

Richardson says the navy’s plans for the carrier air wing have always included a mix of fourth- and fifth-generation fighter aircraft. Regardless of the outcome of Mattis’ review, Super Hornets will fly alongside F-35s until at least the 2040s and Boeing is on contract to build jets for the navy up to 2018. By the early 2030s, the four squadrons on each US carrier will be evenly divided between F-35s and Super Hornets. He acknowledges that the Super Hornet could be upgraded to a “four and a half generation” capability to stretch its service life.

F-35 programme executive officer Lt Gen Chris Bogdan said on 22 March that the navy was facing a tactical air shortfall for years to come, one that the service must address by buying as many F-35Cs as it could afford, plus other aircraft. Although the Navy could afford to buy more fourth-generation aircraft, the service could not substitute a Super Hornet for an F-35C in a high-end fight. He said: “They’re gonna die in a high-end fight and I don’t know how economical that is.”

Two months before Trump’s election, a Center for Strategic and Budgetary Assessments analysis recommended F-35s for naval counter-air operations. Senior CSBA fellow Bryan Clarke says the fleet architecture study assumed the navy was moving towards a force of half F-35s and half F/A-18s, the latter to be retired in the 2030s and replaced with an unmanned combat aircraft and ISR tanker.

CSBA examined the characteristics a future manned tactical aircraft would need, such as longer range and C4ISR capability, as well as the ability to control unmanned aircraft. The F-35 may have started as a strike fighter, but the jet’s primary role has evolved into a C4ISR platform that can conduct command and control, Clark says.

“That’s why we saw the need for this moving toward an air wing that was half strike fighters and half unmanned aircraft eventually,” he says. “So we saw the F-35 as being a better example of the kind of aircraft we needed… The reason being the F-35 has a lot of that built-in sensor fusion capability.”

Boeing maintains there is no F/A-18 XT, but is calling its newest version of the Super Hornet simply Block 3. The proposed configuration could be introduced in the early 2020s and built on the same line as the legacy Super Hornet – much like E, F and G models are built on the same line today. Boeing’s vice-president of F/A-18 and EA-18G programmes, Dan Gillan, tells FlightGlobal that, looking at the aggregate demand with possible sales in Canada and Kuwait, Super Hornet production rates are set to increase and economies of scale would help drive down costs.

The company’s approach to an enhanced F/A-18 has changed since 2013 when Boeing first unveiled the advanced Super Hornet, which included conformal fuel tanks, an enclosed weapons pod and signature enhancements fielded on a Block II aircraft. Boeing flew the advanced variant 21 times that year, demonstrating how the fighter could push the envelope on stealth.

In 2016, Boeing migrated away from the stealth approach and shifted its focus towards other attributes that could make the aircraft more effective for the carrier wing, Gillan says. The Block 3 configuration extends the Super Hornet’s range with conformal fuel tanks to make the aircraft equal and complementary in range to the F-35, Gillan says. He argues the Super Hornet can carry more weapons at an equal range and would be stealthy enough in the Block 3 configuration to serve as a viable platform through the 2030s.

Other attributes on the advanced Super Hornet, such as an internal infrared search and track (IRST21) sensor and an enclosed weapons pod, fell out of favour as Boeing refined its Block 3 configuration. Boeing maintained some low-observable characteristics, however, and applied stealth coating on the aircraft.

“Our analysis showed us over time that being that much more stealthy was not a game changer for the carrier air wing in the ’20s and ’30s,” Gillan says. “Super Hornet is a stealthy aeroplane, F-35 is a more stealthy airplane. That higher level of stealth is effective for some missions, but the compromises you make to have the highest levels of stealth mean you can’t necessarily bring as much ordnance to the fight.”

Boeing also updated the Super Hornet with an open architecture cockpit with a 48cm (19in) wide-area display. The enhanced F/A-18 has been optimised for the air-to-air fight with an IRST mounted on the centreline fuel tank. The ISRT serves as a counter-air sensor that can see heat, Gillan says.

On top of those added capabilities, Boeing and the navy are working on extending the current Super Hornet fleet’s service life from 6,000hr to 9,000hr, Gillan says; Boeing could bring a Block 3 aircraft with a 9,000hr service life off the production line.

Meanwhile, Lockheed continues to push the F-35C’s stealthy signature as the aircraft’s main selling point in an increasingly complex airspace. But the Joint Strike Fighter has also taken criticism over its limited weapons carriage: today it can store two air-to-air weapons in each of its two weapons bays. Six hardpoints on each wing boost the aircraft’s total ordnance package to 18,000lb, a slight increase in payload capacity over the Super Hornet, but at the cost of its low-observability. That stealth capability may not be necessary by the second or third day of war when the element of surprise has already been given up, says Jim Gigliotti, F-35C and US Navy programme manager at Lockheed.

“There’s been certain arguments on the capacity of the aeroplane. That is just not true in how it’s been presented,” Gigliotti told FlightGlobal. “What really gives this aircraft its edge against anything out there flying today is the inherent mission system, and combined with that stealth capability that makes this platform truly a force enabler for the entire fleet, not just the air wing. It’s going to make the Super Hornet a better platform and a better warfighter.”

While it may cause concern that the F-35 can only increase its payload by giving up its stealthy aspect with external weapons, Lockheed is already working to take that consideration off the table for all three F-35 variants, Gigliotti says. “I can’t go into anything,” he says. “Just to say, we have the capacity and we’re working on growth of this aircraft already to answer any concerns about the future capability of this aircraft against growing threats.”

Along with its advanced capabilities, the F-35C carries some baggage with the Joint Strike Fighter programme. A report from the Pentagon’s top weapon tester detailed issues with the F-35C’s stiff landing gear struts, particularly the nose gear, which caused “excessive jarring” that often required pilots to stop taxiing. Pilots described vertical oscillations during catapult launches as excessive and violent, according to the report.

Lockheed recently completed tests at Naval Air Station Patuxent River, Maryland and determined that the aircraft did not require a new nose gear. Gigliotti says the holdback bar behind the nose gear has been detuned to a lower release which results in slightly less strut compression on the initial catapult release.

“That has seen some improvement there in the response of the aircraft going down,” he says. “We’ve also looked at some techniques the pilot uses in the airplane to firmly strap yourself in, but please keep in mind that any catapult is an inherently violent evolution anyway.”

Both Lockheed and the JSF Joint Programme Office maintain the oscillation issues occur only with very low fuel weights, such as when the navy conducts initial carrier qualifications when pilots carry low fuel, and not during typical fleet operations.

Earlier this year, Lockheed also addressed a flutter issue that affected the aircraft’s ability to carry the sidewinder missile. A redesign of the outboard wing panel beefed up a rib and spar to take some of the loads at the weapon attach points, Gigliotti says. Lockheed will retrofit existing F-35Cs with the improved panels beginning in August and ending by early 2019. Depending on the number of aircraft in the developmental fleet, Lockheed could retrofit about 30 jets, he says.