Norwegian Air launched transatlantic flights with Boeing 737s just over six months ago, a service that executives say is meeting expectations as they prepare for the upcoming peak summer season.

"Most of the routes we started off with are living up to our expectations," says Thomas Ramdahl, chief commercial officer of Norwegian, in an interview with FlightGlobal.

The Oslo-based carrier began the flights between Hartford, Newburgh Stewart and Providence in the USA, and Belfast, Bergen, Cork, Dublin, Edinburgh and Shannon in Europe from June 2017.

Norwegian touted the economics of the 737 Max 8, as well as the lower costs and easier access at secondary airports in the USA, as its rationale for the flights.

"We’ve put everything together to make sure we don’t need to get… big numbers on each route,” Norwegian senior vice-president of sales Lars Sande told FlightGlobal in February 2017. The 737-8 had the "lowest cost per kilometre of any aircraft", he added.

Some markets have worked and some have not. Norwegian will reduce service to Edinburgh this summer, including dropping Hartford altogether, as a result of the Scottish government's failure to reduce the UK's air passenger duty at the airport, says Ramdahl.

"The [air passenger duty] has hit us quite hard," he says. Norwegian will continue to serve Edinburgh from Stewart and Providence this summer. However, FlightGlobal schedules show seats will be down 42% to Stewart and 24% to Providence year on year in the third quarter.

Service from Ireland is meeting or exceeding expectations, he says. The airline plans to increase Dublin-Stewart frequency to twice daily this summer and is just awaiting slot assignments in Dublin to begin marketing the flight.

Norwegian's transatlantic 737-8 capacity will be down by 12.2% year on year in the third quarter, schedules show. However, that is entirely driven by the Edinburgh reductions, with capacity up 7% excluding the Scottish city.

Stewart and Providence are different markets. While an obvious statement at first glance, Ramdahl says there are deeper distinctions between the airports.

Stewart, a 111km (69 mile) drive from the Port Authority Bus Terminal in Manhattan, has proven a good alternative airport to New York City for European travellers, he says. Despite the distance, its operation as one of the region's four primary commercial airports by the Port Authority of New York and New Jersey is an advantage.

"New York is New York and it's an easy market to sell for the European side," says Ramdahl.

Norwegian will fly about 13% fewer seats to Stewart in the third quarter compared with the same period in 2017, schedules show. However, without the Edinburgh reductions, seats will be up nearly 1%.

The Port Authority has a vested interest in Norwegian's success at Stewart. The airport haemorrhaged traffic after the 2008 recession, falling by nearly 70% to just over 275,000 passengers in 2016 from a peak of nearly 914,000 in 2007, airport data shows.

In just the first few months of Norwegian's operation, passenger traffic at the airport increased by 59.8% to 402,214 during the 11 months ending in November 2017 compared with a year earlier.

The Port Authority was not immediately available to comment on Norwegian's service. However, one way it does support the carrier is with a bus connection to Manhattan that it launched shortly after flights began last summer.

Providence, at 106km from Boston's South Station is a comparable distance from the city centre as Stewart, but has proven to be a distinct market from Boston, says Ramdahl.

"We're able to sell Providence as Providence," he says, adding that that includes marketing it as a gateway to New England and Cape Cod.

In addition, demand to Providence is proving seasonal, whereas to Stewart it is year-round, says Ramdahl.

"Providence is working quite well for us during the summertime. It's always important to have a year-round presence, or the market cost of building up the next season is quite high," he says, when asked if Norwegian will continue to serve the airport after the peak summer season.

The airline will fly nearly 7% more seats to Providence in the third quarter versus last year, schedules show.

The Providence airport was not immediately available for comment on Norwegian's service.

Norwegian does not plan to materially grow its transatlantic 737-8 operation this year. It is focused on expanding its Boeing 787 operation, with 15 new routes planned, including those to Austin and Chicago O'Hare in the USA and from Amsterdam, Milan and Rome in Europe. 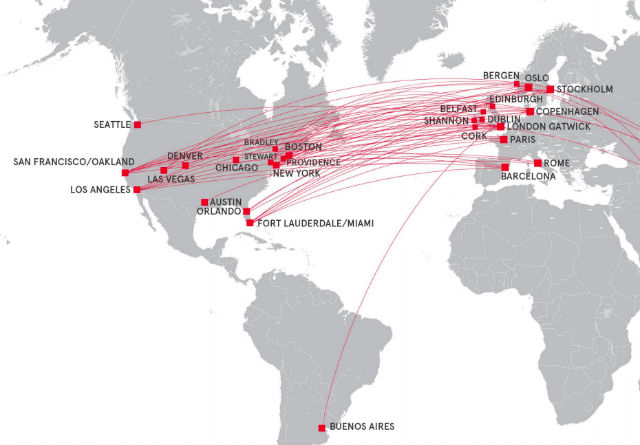 Norwegian's 2018 transatlantic network, as of November 2017

"It's been quite good," says Ramdahl on the performance of the transatlantic operation.

Questions remain on the profitability of the carrier's rapid transatlantic growth. System unit revenues declined by 7% year on year during the first nine months of 2017, when capacity grew by 23%.

Bjørn Kjos, chief executive of Norwegian, has repeatedly said the airline would not continue to operate its transatlantic routes if they were not profitable.

Norwegian is looking forward to its first Airbus A321LR deliveries in 2019 to expand its transatlantic narrowbody operation, says Ramdahl. With a range of 4,000nm (7,408km), the aircraft can serve more cities on both sides of the Atlantic than the 737-8, with a range of 3,515nm.

"The Max works great from Ireland and the UK," he says. "You will see more A321LR routes coming into medium-sized airports in the USA, connecting to [smaller] capitals in Europe."

Berlin, Brussels, Budapest and Prague are possible European gateways for the Airbus narrowbody, while Baltimore/Washington and Washington Dulles are possible US destinations, says Ramdahl.

Partnerships are another growth opportunity Norwegian is eyeing. The carrier announced its first such tie-up with EasyJet in September 2017, and one with Widerøe Airlines in January.

"It's always good to have a partner on the other side," says Ramdahl. "We will be scoping out some possible partners in the USA…. They won't be a legacy [carrier], I can tell you that."

Alaska Airlines and JetBlue Airways immediately come to mind as possible partners for Norwegian. Both carriers have a so-called Swiss approach to partnerships with codeshares that cross alliances and regions.