Aviation professionals are pessimistic about the ability of the industry to continue to improve airline safety.

Only a narrow majority – 51% – of respondents to a recent Flight Ascend Consultancy airline safety perception survey thought that safety had improved during the past five years. A majority – 52% – also took the pessimistic view that safety cannot be expected to improve any further or may actually get worse. Only 44% thought that airline safety could continue to improve.

Last year was one of the safest ever, with a global airline fatal accident rate of one per 3.3 million flights and a revenue passenger fatality rate of one per 17.2 million passengers carried. This continued the trend of improving safety.

The fatal accident rate for 2015, which was by far the safest year ever, was one per 4.76 million flights, and for 2014 one per 2.43 million. The average for the past five years is now about one per three million flights. On this basis, airline safety is almost three times better than it was 10 years ago.

Although some years have been better than others, the fatal accident rate has been improving for some time. At the start of the 1990s, the rate was about one per 0.6 or 0.7 million flights. Therefore, based on this metric, airline operations are now some four or five times safer than they were 20 years ago.

However, despite this well-established trend for increasing safety, Flight Ascend Consultancy’s annual safety perception survey reveals that the perception of the industry’s safety, how it has been changing in recent years, and what might be expected in the future, is far less sanguine.

Airline safety must continue to improve to have any hope of changing this perception. If the rate stays as it is, the number of accidents will increase, and this will appear to confirm the pessimistic view that the industry is becoming less safe.

Fortunately, for many years airline safety has not only been improving, but actually improving at a greater rate than exposure has been increasing. The number of accidents is actually being driven down. It cannot be long before we start getting years with “zero fatal accidents”.

This has been achieved already in some areas of the world. However, the industry remains unconvinced that this goal is within reach on a global basis. A separate “question of the week” survey in Flight International in January asked if “a fatality-free 12 months for commercial aviation” was possible and got a resounding “not very likely” in response. Of the respondents, 72% agreed with the statement “unrealistic, due to human factors” and only 16% said it was “within industry’s grasp”. 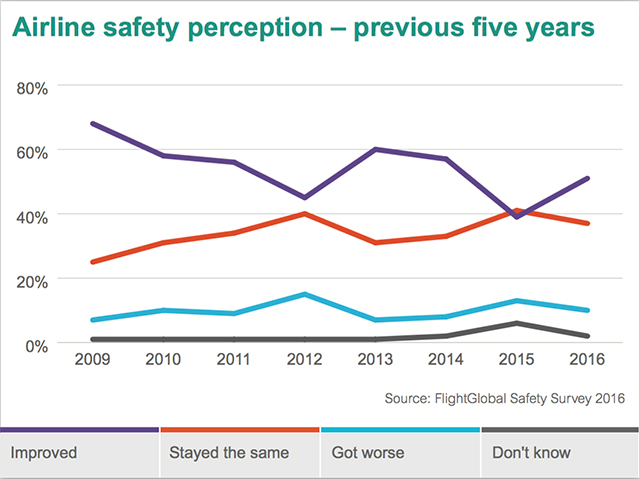 Flight Ascend Consultancy carried out its annual safety perception survey of aviation industry personnel across all levels in December 2016 and early January 2017. The highest proportion of respondents were from aerospace manufacturing and related services, MRO firms and airlines. Some 26% of respondents were top and senior management including chief executives. A further 24% comprised team leaders or heads of department, and 35% were other qualified professionals. Of the participants, 47% were based in Europe, 32% in North America and 11% in Asia-Pacific.

The survey began with two questions about how “airline safety” had changed globally over the past five years and how it might be expected to change over the next five years – “improve”, “get worse”, “stay about the same” or “do not know”.

The questions were kept deliberately vague and did not define what was meant by “airline safety: in order to elicit the basic feelings of respondents. Virtually everyone who responded had a view on the matter with relatively few ticking the “do not know” boxes.

The perception of airline safety is, in many ways, as important as the industry’s actual level of safety. The fatal accident rate is better than it has ever been, but a large number of people are still scared of flying or at least experience some apprehension about boarding an aircraft. The more unsafe they perceive the industry or individual airlines to be, the more inclined they are not to fly.

Despite fatal accidents becoming much rarer, many people still have negative perceptions of the industry’s safety and feel apprehensive about flying, with a significant minority actively avoiding taking a plane if they can possibly help it, preferring to expose themselves to the greater risks of driving instead.

It has been estimated that between 10% and 40% of the general population in industrialised countries has some fear of flying, ranging from “mild apprehension” in some to an “incapacitating phobia” in others. 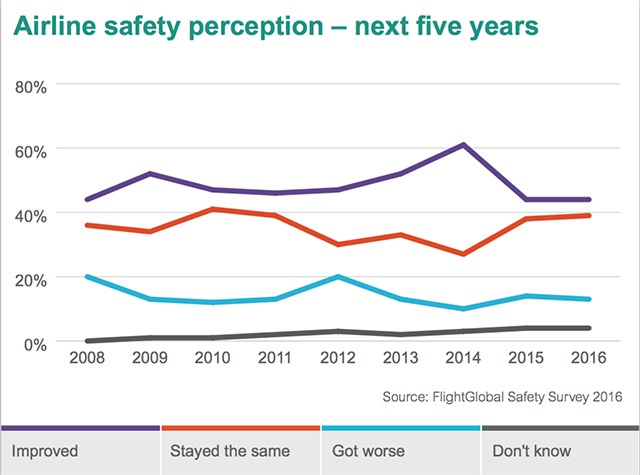 In 2009, the first year in which this part of the survey was conducted, 68% of respondents thought that air safety had improved in the previous five years, 25% said it had stayed the same and 7% that it had worsened. Following the “high point” in 2009, the trend in results has generally shown a gradual fall in confidence over the years. The poor 2015 result, which was 29 percentage points lower than in 2009, marks the lowest confidence level so far. The year 2016 sees a return back towards earlier confidence levels.

The increase in the percentage of respondents thinking air safety had improved in the previous five years in the survey mirrors falls in the other three categories, including “Don’t know”. In 2015, 41% of respondents thought air safety had remained unchanged during the previous five years compared with 37% now, a reduction of four percentage points.

The percentage of respondents thinking that air safety has been getting worse has stayed broadly the same, at around 10%. The lowest years for this category were 2009 and 2013, at 7%, while the highest, with 15% of respondents, was 2012.

Looking to the future, when asked about changes in air safety during the next five years, respondents were slightly less confident than they were about the past, with 44% believing things will improve, compared with the 51% who believed that safety had improved during the previous five years. However, 2016’s result was the same as 2015’s.

Unlike respondents’ views of the past, over the past eight years, their view of the future has been broadly consistent. Opinion may go up or down from one year to another, but the longer-term trend is more or less flat across the three main categories.

Provided with a list of 10 potential threats to safety, participants were asked what level of threat each one represented. Among those judged a “significant threat”, 37% cited “a shortage of experienced personnel”, 37% “complacency” and 30% “fatigue/work practice”. These are the same three most “significant threats” cited in the 2014 and 2015 surveys, although their order of importance has changed slightly with “fatigue” falling from being top in 2014 down to third place in 2015 and 2016.

As in previous surveys, areas seen as less of a threat to safety included “rapid growth in airline size”, “airport/airway congestion”, “ageing aircraft” and the “criminalisation of accidents/incidents”. The perceived threat to safety posed by ageing aircraft fleets has again fallen to the bottom of the list, with only 12% of respondents considering it either a “significant” threat to safety. However, this does show an increase over 2015, when just 11% of respondents counted it in this category. In 2014, 15% regarded it as a “significant" threat.

Respondents also had the opportunity to add plain language comments. These, as might be expected, broadly reflected the scores given to the different threats to safety in the survey. Training adequacy and reduced experience levels were cited by many; however, another area that “worried” respondents was perceived “cost cutting”, with airlines being seen to put “profit before safety”. Security, sabotage, attacks on aircraft and “pilots deliberately crashing aircraft” also often appeared in the comments; the fine distinction between safety and security was not made.

Factors expected to be most important in driving improvements in safety in the future were mainly “technical”, with “new technology (ground)” being thought to be a “significant” driver for safety improvements by 47% of respondents. “Management accountability for safety”, which was ranked first the year before, slipped to second place in 2016 with 38% of respondents rating this as “significant”. Other areas thought to be “significant” drivers for safety were “new technology (aircraft)” and “increased adoption of available safety equipment”, with both scoring highly.