Qantas's turnaround since 2015 may be an obvious case study for airline management textbooks – but one voice has warned that its conservative financial management could actually be sowing the seeds of its next big challenge: fleet replacement.

In a report titled Can Qantas Or Virgin Australia Afford To Take A Capital Holiday?, S&P Global Ratings warns that the under-investment by Qantas in its fleet in recent years could lead to a perfect storm in 2020, when the carrier's spending on new aircraft will need to rise at the same time as it will be required to resume paying company tax.

Flight Fleets Analyzer shows a range of ages across Qantas's various types. The most geriatric aircraft are its regional turboprops and Fokker jets, although S&P admits these are "right for purpose". 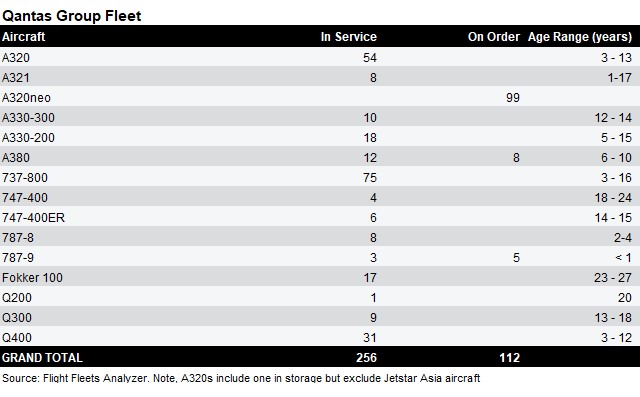 But the agency highlights concern around the 747-400ERs delivered in 2003, and the A330s that also started arriving that year, which will be the next candidates for retirement. Also looming is the replacement of 75 737-800s. That will necessitate a major replacement programme, and S&P says that the clock is ticking for the airline to start that process.

Qantas rejects the ratings agency's assertion, which – the airline says – "ignores the fundamentals of our business and our fleet strategy".

"Our ability to meet our long-term capital expenditure needs are clear. Our balance sheet is as strong as it has ever been, our debt levels are towards the bottom of the target range and we have an aircraft orderbook with a lot of flexibility," the carrier adds.

In the meantime, it says, investments in new cabin layouts to add more seats to its 737s, A320s, A330s and A380s "translates into more revenue that enables us to keep investing".

To be fair, the carrier has been actively looking at replacements for some of its most elderly aircraft. The oldest five 747-400s are starting to be removed from its fleet as they are replaced by 787-9s, while under its "Project Sunrise" competition the six -400ERs are set to be replaced by 777-8s or A350-900ULRs.

Both manufacturers are likely to pitch strongly in that competition, and Qantas's chief executive Alan Joyce has indicated that the carrier is looking to place an order for those aircraft in 2019, to secure deliveries in 2022-23 – but has given little indication of how many of the jets it is likely to purchase.

The stakes in the competition are high, as a decision on the Sunrise aircraft could open a path to replacing the airline's A380s with A350-1000s or 777-9s. Even if an A380neo were to emerge, it is unlikely that a large, quad-engined airliner will ever again wear the Flying Kangaroo livery under Joyce's watch.

Qantas has shied away from any suggestion that it needs to replace its 737-800s – at least until recent months, when Joyce has started to indicate that the airline is looking at the A321neo and Boeing's New Mid-market Airplane (NMA) as potential successors to its domestic workhorses.

The carrier already hold orders for 99 A320neos, which have been earmarked to replace the A320ceos at its budget unit Jetstar and its Asian affiliates. The first of those re-engined narrowbodies will be delivered in 2019, but the overall order has shifted a number of times as Joyce and successive chief financial officers Gareth Evans and Tino La Spina have obsessively contained capital expenditure.

Curiously, though, Joyce recently told FlightGlobal that the carrier was not looking so much at the A320neo or the 737 Max 8 as replacements for the 737-800 fleet, but rather the A321LR and Boeing's proposed NMA.

He admits, however, that if the carrier went down the NMA route, it would likely look at the 737 Max as an intermediate step. With the NMA unlikely to enter service until 2025, the oldest 737-800s could be replaced by Max 8s or even 10s in the short term.

"For us that's working in, how do we manage the transition of the 737s? Do you do something like 737s to Max, to NMA – is that the Boeing solution? And is the Airbus solution then the A321neo, given the size of the A320s which we have?" Joyce says.

"What we want is just competition, because when we're looking at the renewal of the domestic fleet, you want both to have viable products."

Qantas's reluctance to take on additional debt is likely to limit how many aircraft it will take in any particular year, and the constraints of the Qantas Sale Act on how much foreign ownership it can have could also limit any move to issue further equity to fund future acquisitions.

This indicates that, at some level, the airline needs to move away from its policy of limiting capital expenditure and returning cash to shareholders.

Nonetheless, for now there appears to be little appetite to change its conservative investment profile. Joyce says Qantas is evaluating upgauging some of its A320neo orders to A321neos and looking at business cases for additional 787s. However, finance appears to be the main focus.

"We have to fit all of that within the capital profile that we have set ourselves," he says.

If the S&P report is to be believed, at some point this capital profile will have to change to accommodate future fleet replacement. The report advocates that change needs to come sooner rather than later.

"The sooner [fleet replacement] is commenced, the smoother the funding profile is likely to be. At this stage, we believe Qantas still has some near-term flexibility regarding its renewal programme, although this window is narrowing," says S&P.

Qantas, for its part, is emphatic that it is managing its fleet and expenditure prudently.

"In short, we're always investing in fleet, and we'll continue to manage our capital expenditure in the best interests of our business," Joyce says.