Georgia was once an important point on the historic Silk Road trade route linking China with Europe. Now the country has ambitions to develop itself once more as a transit hub – this time on the back of a burgeoning aviation market.

"The great thing about Georgia generally is its strategic position; we could create a great hub in the region," Georgian Airways' head of business development Eteri Gaiashvili told FlightGlobal at the Connect conference in Tbilisi on 26 February.

Located in the Caucasus region, Georgia straddles eastern Europe and western Asia, bordering Russia to the north and Turkey to the south. Gaiashvili points out that the country is also well positioned to serve Middle Eastern destinations such as Iraq and Iran.

Its airports grew passenger numbers 46%, with over seven million international passengers arriving into the country during the period, Kumsishvilli notes.

"Aviation and [the] tourism sector remains a key priority for [the] Georgian government, and we anticipate similar growth this year," he adds.

FlightGlobal schedules data indicates that Georgian seat capacity was up 37% in 2017, at 2.38 million, and is set to rise 21% this year. Since 2010, seat capacity has more than tripled. 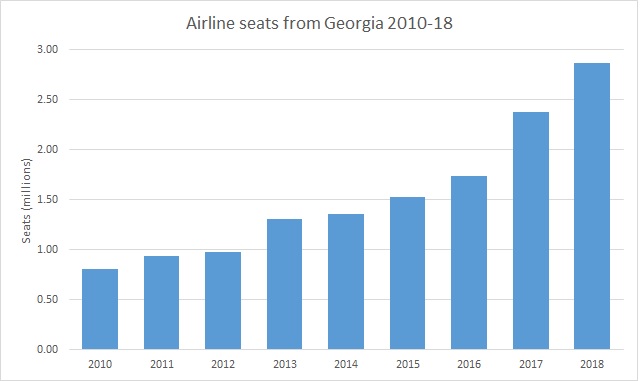 This month, the largest carrier in the market by seat capacity is Turkish Airlines, offering almost 31,000 seats, closely followed by Georgian Airways with just under 29,000 seats, giving each airlines roughly 14% of the market. 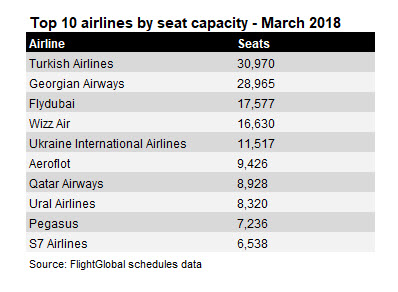 While carriers such as Georgian Airways, Flydubai and Turkish have concentrated on the capital Tbilisi, low-cost carrier Wizz has made Kutaisi airport, in the west of the country, its focus of growth into Georgia.

The airline opened a base at Kutaisi in 2016 and will station a second Airbus A320 there this summer.

Wizz is this month beginning direct twice-weekly flights between Latvian capital Riga and Kutaisi. The budget carrier will operate 16 routes from the Georgian airport by May.

The fast-growing routes between March 2017 and March 2018 were to Tehran, Moscow Domodedovo, Yerevan and Rostov, while services to Kiev's Zhuliany airport, Aktau in Kazakhstan and the Egyptian resort of Sharm el-Sheikh had the biggest declines in seat capacity. 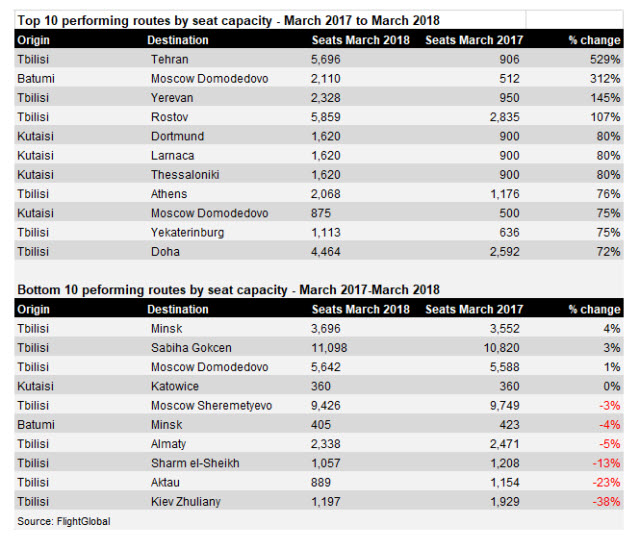 Bravo Air, previously a cargo airline, plans to relaunch as a charter operator in May.

Speaking to FlightGlobal at the Connect conference in Tbilisi on 20 February, commercial director Farshid Abdollahzadeh said the airline planned to use a fleet of Boeing 737s for charter flights from Tbilisi to Dubai, Iran, Kuwait, Oman and Saudi Arabia, among other markets.

"If we look at the latest development of the market and the way passenger traffic is increasing, this is a very good indication for investors. I think it's a very good time to open an airline in Georgia," says Aptsiauri.

In the longer term, Myway has ambitions to develop a transit business from its planned base of Tbilisi airport.

Aptsiauri says that while Georgian Airways has so far focused on point-to-point traffic, Myway will seek to pursue a "different strategy".

Transit traffic at Tbilisi is currently at a "record low", he says, adding that he envisions such traffic eventually accounting for 30-40% of Myway's business.

But Aptsiauri warns that transit traffic will not develop to its full potential while Georgia is "dominated" by foreign carriers.

He adds: "You cannot develop the country's network only with the foreign carriers if you are developing as a transit hub. This has to be done by a local, domestic airline."

FlightGlobal schedules data shows that the largest route from Georgia by seat capacity is to Istanbul, followed by Dubai and Kiev. Given the dominance of Turkish Airlines, Flydubai and UIA in the market, this is unsurprising, but it is also fair to assume that those carriers are pursuing a strategy of hubbing passengers through their respective home gateways, to the detriment of Tbilisi's hopes of developing a transit market. 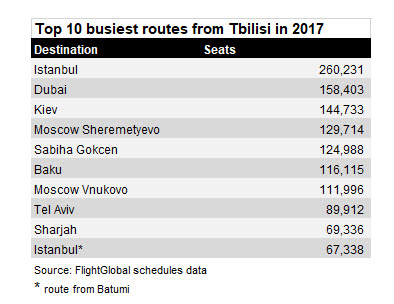 Georgian Airways, the country's de facto national carrier and one of its biggest players, also has ambitious plans to expand its operations this year.

The expansion will more than double Georgia Airways' existing network of 10 routes, four of which only began in 2017.

With the new routes, the carrier is hopeful of increasing international passenger numbers from 300,000 last year to between 800,000 and one million this year, she says.

Gaiashvili says the airline also has ambitions to develop Tbilisi as a transit hub.

The growth of the Georgian aviation market has coincided with a strategy of liberalisation pursued by the nation's government.

Georgia has been a signatory to the European common aviation area since 2010, giving it full access to European markets and vice versa. In March 2017, a new 180-day visa waiver regime with members of the Schengen area came into effect.

Government figures show that the number of visitors to the country grew from just over two million per year in 2010 to more than 7.5 million in 2017. 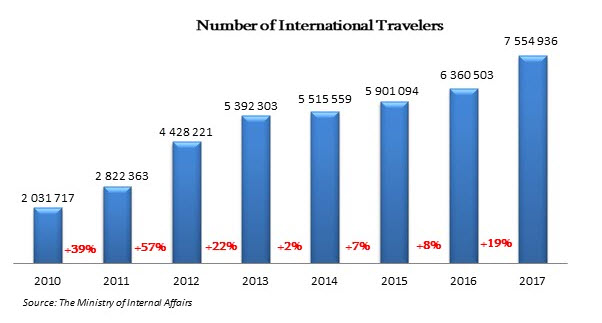 In 2017, TAV Georgia opened a new terminal at Tbilisi airport, raising the gateway's capacity to four million passengers per year. The airport's potential to become a transit hub is aided by its ability to operate 24h a day.

The fact that neither of Europe's largest low-cost carriers – EasyJet and Ryanair – currently operates to Georgia could suggest there is still untapped potential, or that there are challenges preventing their arrival.

Speaking at the Connect conference, Ryanair director of network development Niall O'Connor acknowledged that while the airline had held talks with both Kutaisi and Tbilisi airports, nothing had so far developed from these.

O'Connor complained that there was a "high-cost airport problem in Tbilisi" which needed to be addressed.

How far Georgia's homegrown carriers can succeed in developing transit traffic in Georgia will depend on how successfully they can position themselves in a market that is already heavily skewed towards foreign carriers. The growth of low-cost operators such as Wizz and Flydubai, meanwhile, suggests that ticket prices are relatively competitive.