It’s no surprise to hear Rolls-Royce declare there will be a long future for the gas turbine. The name “Trent” is arguably more widely associated globally with a family of jet engines than it is with the river flowing past R-R’s Derby home, and in any case the company is investing heavily in a new geared architecture, called UltraFan, which is set to fly for years if not decades to come.

But when it comes to the sort of disruptive technology needed to meet ambitious targets for slashing aviation emissions, even R-R says the gas turbine isn’t the answer. At least, not on its own. Speaking earlier this year in London at the Revolution.Aero conference focused on electric flight, R-R’s head of future aircraft propositions, Giulio Zamboni, made clear that the company’s vision is of a hybrid electric future. That is, R-R believes combining electric and gas turbine power will reduce the CO2 and NOx emissions from medium-to-large aircraft, and become a primary propulsion system for urban and regional transportation.

Zamboni outlined three aspects to R-R’s plan. First, it will continue to optimise gas turbine engines, and is spending £1 billion yearly on R&D. The UltraFan research programme aims to better Trent engine efficiency by 25%. That improvement will come in large part from UltraFan’s geared-fan architecture and, says Zamboni, the technology is scalable, to benefit both narrowbody and widebody airliners.

Second will be efforts to significantly increase the integration of power with airframes.

And third, there is electrification. Here, says Zamboni, breakthroughs in battery technology are needed if all-electric aircraft are to have any meaningful commercial impact. This is why R-R believes it is hybrid systems – where power from combustion engines is used to generate the electricity that drives electric fans for thrust – that will make the running.

Indeed, Zamboni believes electrification will prove disruptive in short haul and regional travel. Electric assistance may, for example, increase available lift – allowing for shorter runways and hence smaller airports, as well as quieter take-offs; the result, very much dependent on an overhaul of transportation policy and infrastructure that goes far beyond merely introducing a new generation of aircraft, could be to bring small but capable airports closer to urban or residential areas than is tolerable with current technology.

R-R divides the potential market into three segments for hybrid-electric drive. VTOL – vertical take-off and landing – personal transportation vehicles, carrying up to five passengers, could travel up to 500nm, some 900km, at more than 200kt or 400km/h – air taxis, in effect. Larger aircraft, for four to 20 passengers, would again be VTOLs. Regional aircraft in the 20- to 100-passenger range are also candidates for hybrid-electric propulsion.

Large regional aircraft with ranges up to around 850nm, and even small-medium business jets or narrowbodies with ranges up to 1,500nm, are candidates for hybrid-electric propulsion. Narrowbody and widebody airliners of longer-range capability fall in to the “more electric” category, where the gas turbine provides propulsion and ongoing improvements in electrical technology mean non-propulsive systems are increasingly electrified. 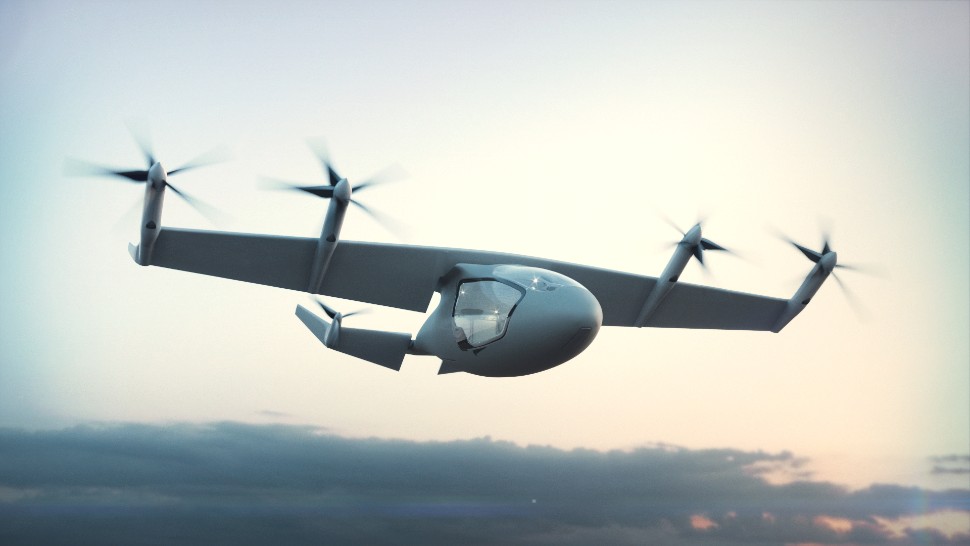 Alan Newby, R-R’s director of aerospace technology and future programmes, tells FlightGlobal: “We see electrification as a new age, and we want to be there.” And, he stresses, to meet Europe’s FlightPath 2050 targets for slashing emissions – the so-called ACARE, or Advisory Council for Aviation Research and Innovation in Europe, targets – “We’ve got to push as hard as we can.” That, he says, needs new technologies.

To cut CO2 and NOx emissions by 75% and 90% respectively while making aircraft emissions-free when taxiing and, for good measure, recyclable, is an ambitious objective. Getting there, says Newby, will mean exploiting two key trends. One is electrification and the other is the digitalisation that underpins design.

The reason the gas turbine has a long future, says Newby, are the many shortcomings of batteries, so while batteries are improving and will improve further, they need to be supplemented by gas turbines.

Much improvement can be achieved through better aircraft-engine integration. As Newby notes, aircraft today are, essentially, tubes and wings with the engines bolted on. Clearly nothing is quite that simple, but as both Airbus and Boeing have demonstrated recently, much can be achieved by updating an existing airframe with new engines.

Electrification, however, may enable far more extensive integration, if only because it is probably easier to, say, distribute power by cables than by drive shafts – but this is not necessarily so. Newby makes clear that electrification itself is not an objective. As he puts it, we need to ask: what benefits can we get by changing airframe design, and what does electrification bring to those efforts?

Possibilities that come of airframe-propulsion integration include re-energising the boundary layer of air flowing over the surface of the aircraft. Boundary layer air has energy that in principle could flow through a driving fan to boost its output, rather than leaving the fans to do all the work of energising “clean” air sucked in from the free space below the wings. Here, says Newby, is an example of where electrification may help, by employing distributed fans. Electrification may also lead to simpler and cheaper added-lift configurations.

However, he points out that it is important to recognise there are losses in conversion to electric power, so there have to be aircraft-level gains to realise a net improvement. As any driver of a Toyota Prius knows, one appeal of hybrids is that they can make savings by using stored energy, as opposed to drawing all of their drive force from the fossil-fuel-powered main engine.

Ultimately, that aircraft-level integration is what will turn electrification into a net benefit. Newby makes the important point that, in this context, R-R is a systems integrator. Even in its core business of gas turbine manufacture, it does not make all the components – rather, its expertise is in having the skills to develop and certify a gas turbine, combined with knowledge of fault-tolerant and safety critical systems and the ability to design complex rotating machinery. All of this will be useful in hybrid integration.

He points to R-R’s extensive experience with hybrid electrification, in marine and rail, where the local benefits to noise and emissions are similar to those that may be possible with regional aircraft. For regional aircraft, he believes hybrid configurations “look quite practical”.

That assessment will be tested soon enough. Flight trials should begin in 2021 of an electric VTOL – eVTOL – system built around an R-R M250 turboshaft engine. That 250shp (190kW) powerplant is based on Allison designs dating to the 1960s, and powers modern helicopters including the Bell 407. R-R'S eVTOL is being designed to run in either series hybrid mode – in which the gas turbine us used solely to charge a battery, which provides the motive force for the eVTOL’s electric motor-driven propellers – or parallel hybrid mode, in which power for thrust can come directly from either the gas turbine or batteries, or both simultaneously.

But perhaps a more significant test will come a bit sooner, during the latter part of 2020, with the maiden flight of an aircraft called E-Fan X. This project connects Airbus, R-R and Siemens to a modified BAe 146, with one of its Honeywell gas turbines replaced by an electrically-driven fan. 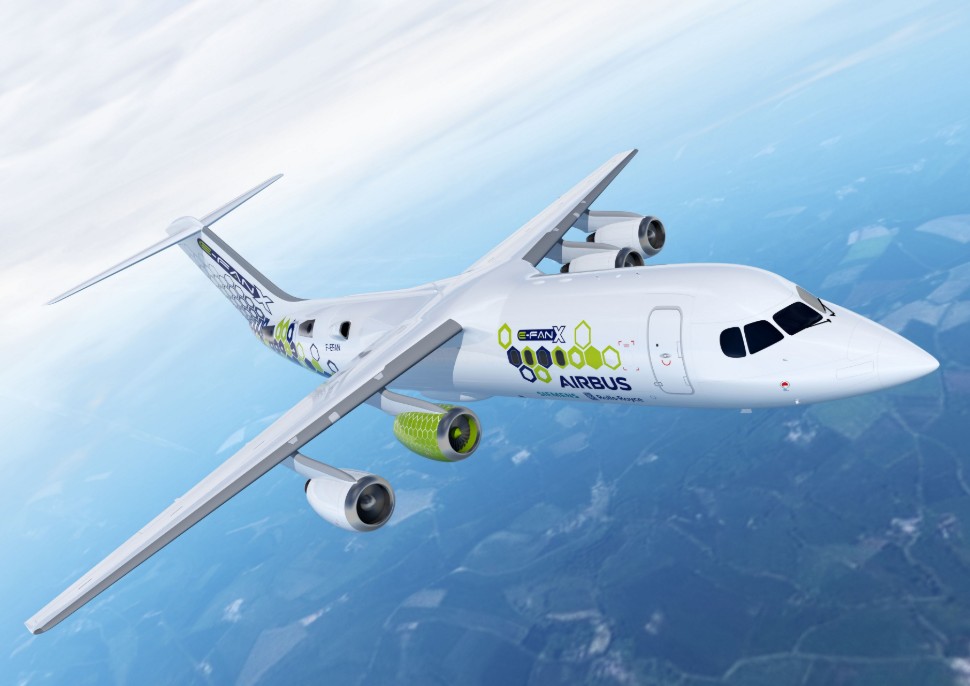 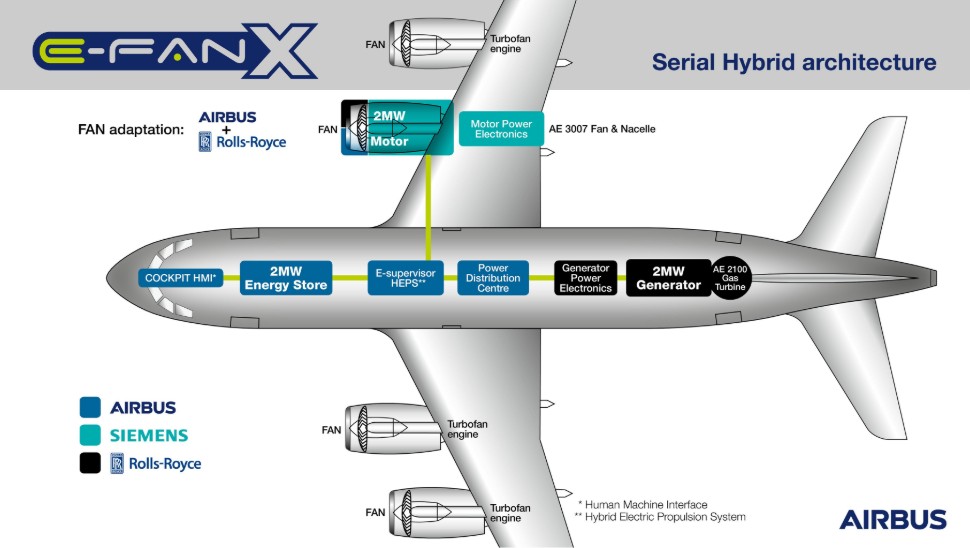 Externally, this aircraft will look much like any BAe 146 – except the right inboard engine nacelle will house a Siemens electric motor driving the fan from an R-R 3007 gas turbine of the type used to power Embraer 145 regional jets. The power for that combination will be generated within the fuselage, where an R-R 2100 gas turbine will drive an electric generator, of R-R design, to produce 2MW of electric power. Airbus-supplied batteries will round out the power system.

The project is no small undertaking. As Newby points out, 2MW is an electric power level that doesn’t exist yet in aviation. But, he says, this technology is “enormously important” to move towards a regional aircraft.

Conceivably, Newby adds, it should be possible for E-Fan X to evolve into a certified aircraft by the late 2020s or maybe 2030. But while from a technology point of view the “back half of the next decade” is doable, Newby stresses that for such a hybrid-electric aircraft to work as a commercial venture there will need to be the political and regulatory will to change the aviation system.

In other words, plugging a hybrid-electric aircraft into the existing air transport system may not be revolutionary, let alone disruptive. R-R is very clear that its broader concept for electrification needs “innovative thinking right across our industry” – in transportation policies and subsidies, physical and cybersecurity, digital ticketing, airport and ground infrastructure design, air traffic management, and regulatory and certification requirements. Single pilot operation will have to be considered, too.

Ultimately, in R-R’s thinking, electrification is one – albeit a key – aspect of a broader social transformation that turns mobility into a service.