Russia’s military-industrial complex – and its aircraft-making industry as an integral part of it – is striving to adjust to the new geopolitical reality that emerged as a result of the annexation of Crimea, the civil war in neighbouring Ukraine and Moscow’s military aid to the Syrian government of Bashar Al-Assad.

Adjustments go along the lines of the policy of import substitution proclaimed by the Kremlin and the motion to follow less technically risky programmes, promising quicker results and benefits. Besides, the economic slump makes Russian strategists look for “asymmetric” solutions, so as to cut costs while ensuring a desirable effect.

It should also be noted that, despite big investments made into civilian projects – the Sukhoi Superjet 100 and Irkut MC-21 jetliners – United Aircraft Corporation (UAC) largely remains a manufacturer of combat aircraft. Most of the merged company’s workforce of nearly 100,000 employees continues to be tasked with making bombers, fighters and airlifters for domestic and overseas customers.

Perhaps the best point to illustrate the argument that Moscow has begun ditching long-term aviation projects in favour of less technically risky ones with shorter cycles is the recent twist in the fate of a formerly high-priority programme to develop a new stealth bomber.

PAK DA – a Russian acronym for Prospective Aviation Complex of Long Range Aviation – is meant to be a new strategic bomber with a gross weight in excess of 100,000kg (220,000lb). In terms of technical sophistication and its future role in the armed forces, the PAK DA project is similar to the US Air Force’s future Northrop Grumman B-21 long-range strike bomber.

The Tupolev design bureau began development of the PAK DA in 2009, and its conceptual design was approved three years later. The aircraft is understood to be a subsonic stealth design employing a flying-wing aerodynamic shape. First flight was planned for 2019, with entry into service six years later.

The PAK DA programme looked strong until April 2015, when defence minister Sergei Shoigu demanded that industry restart production of the Tu-160, a non-stealthy supersonic bomber which first flew in 1981.

“The Tu-160 is a unique machine, which when it first appeared was decades ahead of its time. Even now, the capabilities embedded in her design are not yet fully exploited. Nobody else has invented a better supersonic bomber design,” Shoigu said. In his view, a production restart – even though “a major challenge” for UAC – looked feasible, provided the corporation managed “to consolidate [its resources] on reconstruction and renovation of manufacturing facilities”.

Shortly after, the defence ministry declared its readiness to procure “at least 50” such aircraft. Since then, little has been heard of the PAK DA, except hollow statements that it is still under consideration.

Running two expensive bomber projects in parallel is a costly and complicated duplication of resources, and the PAK DA project is likely to suffer as a result.

UAC’s KAPO plant in Kazan, which previously made the Tu-22M and the Tu-160, has been selected to produce the Tu-160M2, which is expected to be ready in 2023. This improved aircraft will follow a small number of Tu-160Ms with an added capability of carrying up to 90 500kg bombs for the kind of warfare that Russia’s air force and a coalition led by the USA are waging against Islamic State militants. 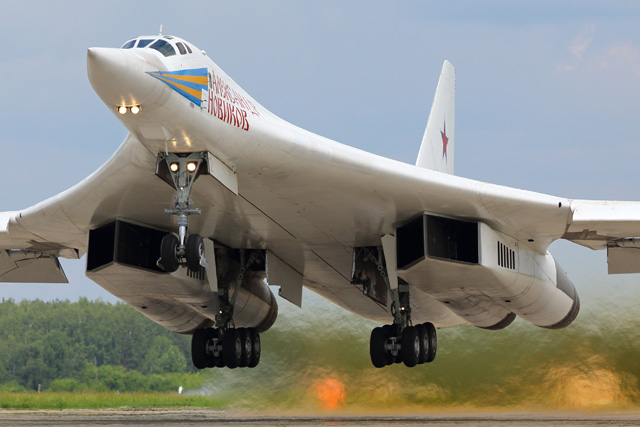 Production of the Tu-160 bomber is set to be revived

The Tu-160M2 is expected to employ new missiles and feature a modern cockpit suite, based on integrated modular avionics. Kret, a Rostec subsidiary that specialises in avionics and electronic warfare (EW), has been contracted to provide a number of key systems, including processors, sensors, an inertial navigation system, EW suite, and fuel and weapons control systems.

Faced with US and EU sanctions – a stance supported by Japan and several other developed nations, Russia has to be careful in managing its resources. The Tu-160M2 effort is not going to be cheap, and air force commander Gen Victor Bondarev has said the production run of 50 aircraft is necessary to justify the expense of reviving the line.

The variable-geometry Tu-160 is an intercontinental supersonic bomber with the ability to carry up to 12 cruise missiles: initially the Raduga Kh-55SM, but more recently the more advanced Kh-555 and Kh-101/102. The type entered service in 1987, with a production of 35 aircraft – including eight prototypes – having concluded with a last delivery in 2008.

Russia’s air force says 16 Tu-160s are still in service, with three more placed with industry, although Flight Fleets Analyser records an active inventory of only 13. Between 2012 and 2015 all serviceable aircraft underwent a mid-life upgrade, and are now to undergo additional work to replace radio and electronics equipment with new hardware; an activity which will conclude during 2019. The bombers will also receive new Kuznetsov NK-32-2 engines with a reworked core for higher temperatures.

In addition to its MiG-29 line of lightweight tactical fighters, RAC MiG continues to work on high-speed interceptors. This programme is sometimes referred to as the MiG-41, which is believed to be the next element in the chain after the MiG-25 and MiG-31 to attain speeds close to Mach 3. The new aircraft will be ready in 2020.

Following a decision by the Russian government, on 29 April the NAZ Sokol plant in Nizhny Novgorod became a member in the corporate structure of RAC MiG. Before becoming a UAC subsidiary in 2006, Sokol built the MiG-25 and MiG-31, and moving it back under RAC MiG’s purview can be seen as another indication that the next-generation high-speed interceptor programme is going forward.

The new MiG will become a second fifth-generation fighter made in Russia following the Sukhoi PAK FA – the Russian acronym for Prospective Aviation Complex of Frontal Aviation. Also designated T-50 by Sukhoi for the Russian air force, six prototypes have entered testing since first flight in 2010. KnAAZ, Sukhoi’s primary manufacturing site in Komsomolsk-on-Amur, is setting up PAK FA serial production, with first shipments due next year.

The PAK FA also provides the basis for the development of a fifth-generation fighter aircraft for Russia and India under a joint project. The Indian air force plans to buy 250 examples at $100 million each, and during prime minister Narendra Modi’s visit to Moscow in December 2015, the two sides reached an agreement on a 40% cost-reduction programme. Each of the partners will invest $4 billion over the next seven years, with $2 billion in the first year and the rest to be evenly distributed over the remainder of the period.

At the turn of the century, when PAK FA development began, Sukhoi preferred to speak of it as a fighter sitting between the 24.5t MiG-29K and Sukhoi’s 34.5t Su-30MK. However, the process of evolution has brought the type’s gross weight to some 37t, and today, the T-50 can be considered as a direct replacement for the Su-30 series.

Even though Russia’s air force remains committed to the project, earlier procurement plans are being adjusted to match Moscow’s new economic environment. Despite a previously stated requirement to buy hundreds of T-50s, Russian military officials now indicate the acquisition will begin with a single squadron for operational trials, with final numbers to be determined later. A key factor in the final decision could be the progress of a planned engine upgrade. The NPO Saturn Item 117, which also powers the Su-35S, is expected to be replaced on the T-50 with Type 30 engines.

The first sign of the earlier PAK FA procurement plans being adjusted came in 2014, when the defence ministry expressed a wish to place a follow-on order for the Su-35, keeping the plant in Komsomolsk-on-Amur occupied. The contract for 50 more airframes due for delivery by 2020 was awarded in December 2015, when the Russian air force received the last aircraft from an earlier order for 48. China had also signed a commitment to buy 24 Su-35s in November 2015 in a deal reportedly worth $2 billion, while Indonesia is finalising a deal for 12.

These foreign orders are important for KnAAZ, which has just completed a production run of the Su-27 “Classic Flanker”. Vietnam was the last customer for the Su-30MK2, with a 2013 order for 12, the last pair of which are due for shipment this year. Deliveries to the Russian customer were completed last year, under a 2012 order for 20 Su-30M2s.

In addition to Sukhoi’s main production site in Komsomolsk-upon-Amur, Su-30 series fighters are also assembled at IAZ in Irkutsk and NAPO in Novosibirsk.

Russia’s air force has so far taken delivery of about 80 Su-34s, from an order for 124: the service plans to eventually have between 150 and 200 examples. The type has been the star of the air force’s bombing campaign in Syria, having dropped more than half of all the precision-guided munitions deployed there. Sales managers expect foreign orders to come for this jet, but so far only one potential overseas buyer has showed interest, with Algeria reported to be interested in acquiring 24.

Meanwhile, IAZ also produces the Yakovlev Yak-130 jet trainer and light-attack aircraft. Russian orders have already exceeded 100 units, and further deals will increase this figure to 150. Algeria operates 16 as trainers, and Bangladesh 14, with two more due for delivery this year. Belarus operates four, and is to receive four more before the end of 2016.

In Soviet times, MiG was a synonym for a Russian-made fighter, as it dominated the inventories of countries allied to Moscow, but today RAC MiG is a shadow of its old self. The “Classic” MiG-29 is in service with 29 nations, with a fleet total of about 800 units. Attrition and wear and tear have taken their toll on a once-huge MiG inventory, but remaining examples still number in the thousands.

“By every standard, MiG aircraft are the least expensive supersonic combat jets in the world to maintain airworthy. Every comparative analysis made fairly proves that,” says RAC MiG general director and general designer Sergei Korotkov.

With its legacy built chiefly on lightweight jet fighters including the MiG-15/17, MiG-19, MiG-21 and MiG-23, the company believes strongly that there is a market niche for a modern and affordable type like the MiG-35. This model belongs to an “Advanced Fulcrum” family which also includes the carrier-optimised MiG-29K/KUB and land-based MiG-29M/M2 multirole fighters. The designation MiG-35 was introduced in 2009 largely for marketing reasons, and Russia unsuccessfully offered it to India for its air force’s medium multi-role combat aircraft requirement, for which Dassault’s Rafale was selected in January 2012.

Sales managers acknowledge that foreign buyers prefer to select products already selected by domestic operators. The Russian air force has shown a moderate interest in the MiG-35, promising to place an order in 2017 – provided that RAC MiG meets its requirements for a future lightweight multirole fighter. An initial order is expected to be for 30 airframes, with shipments to begin in 2018.

Winning further orders for the land-based version of the Advanced Fulcrum will be the key to survival for the famed manufacturer, as its K/KUB business is coming to an end. Last year, RAC MiG completed shipments to the Russian navy under a 24-aircraft order placed in 2012, and before the end of 2016 it will also hand over a final batch of six under a 2010 deal for 29 examples for the Indian navy.