Singapore Airlines’ fleet is evolving as it picks up the pace of delivery of new-generation aircraft. 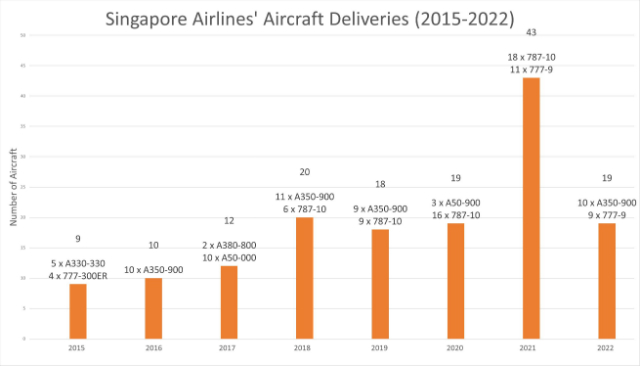 The next four years will see the Star Alliance carrier add a further 99 aircraft, including 20 777Xs it has on order that are due to be delivered from 2021 through to 2022. Deliveries will peak in 2021, with 43 incoming aircraft, Flight Fleets Analyzer shows.

Chief executive Goh Choon Phong has said that the carrier will deploy the -10s, configured with 337 seats in two classes (36 in business, 301 in economy) on regional and medium-haul routes. FlightGlobal schedules data shows that as of last month it has already introduced the type on services from Singapore to Osaka Kansai and Perth.

SIA's A330 network gives a sense of where the carrier likely plans to deploy the 787-10 going forward. The A330, SIA's primary regional aircraft today, has a range that encompasses Southeast Asia, North Asia, the Indian subcontinent and much of Australia – where Goh has declared there will be more 787-10 services.

"This aircraft is very suitable for some of the Australian operations," he said in March during the delivery of SIA's first -10. "There will probably be more routes in Australia where we'll consider deploying this aircraft. 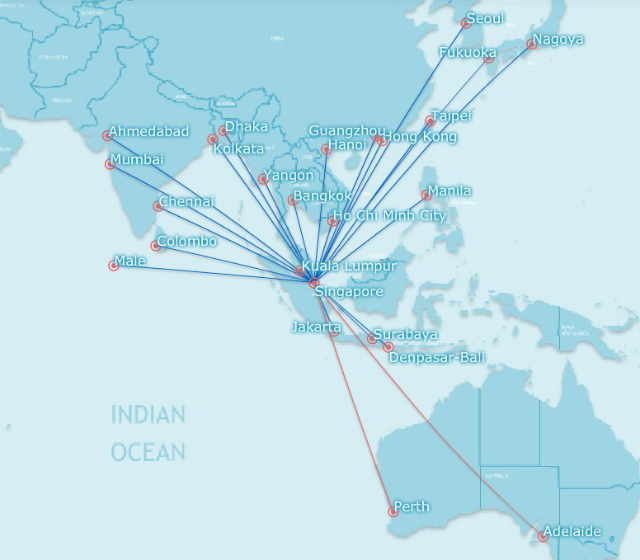 SIA PLAYS PREMIUM GAME WITH A350

At the same time, SIA is tapping on the range and fuel efficiency of the A350 for network growth opportunities.

At the Singapore air show in February, Goh said the A350 has made possible routes that were previously commercially unviable. This has led to the launch of services to Dusseldorf (July 2016) and Stockholm (May 2017), as well as planned ultra-long-range services to New York and Los Angeles. 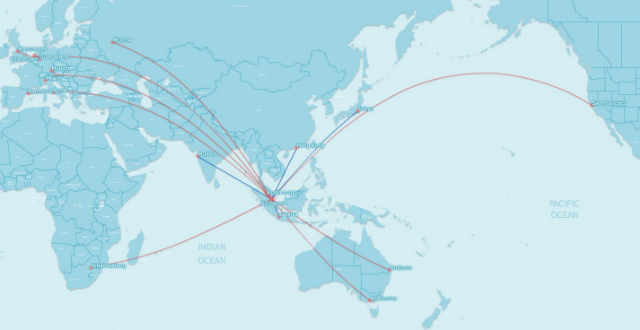 The carrier will launch the world’s longest commercial flight on 11 October, with its near-19 hour nonstop Singapore-Newark service. Details of its planned Los Angeles service will be announced later.

SIA suspended nonstop services to Newark and Los Angeles in 2013, amid high fuel costs and weak corporate demand. Then, it was using fuel-thirsty A340s, fitted with 181 seats: 64 in business and 117 in “executive economy".

The airline is now evaluating other possible destinations it can fly with the ULRs, Goh told reporters this week: “I'm looking at where else to fly… seven aircraft is probably more than what's needed for the New York and LA routes. There are ways we can structure our US operations and we will announce them."

Shukor Yusof, founder of aviation advisory firm Endau Analytics, points to Chicago, Atlanta and Boston as destinations that are popular for both corporate and leisure travel, and where SIA can possibly deploy the A350ULR.

The launch of more ultra-long-haul services would dovetail with SIA’s three-year transformation programme. SIA has earmarked the premium market as a key growth avenue, and says that it would strengthen its premium positioning.

Goh is also optimistic on its plans for the ultra-long-haul segment, despite rising oil prices: “We are getting these planes [the A350-900ULR] because they are the most advanced fuel-efficient planes and we are reasonably hedged for the next four to five years. I don’t think [oil prices] are an immediate concern for now."

SIA has also said that it will place its new 777Xs that will be delivered from 2021 for long-haul expansion, operating alongside the A350-900.

"Oil hitting the $100 per barrel mark may happen, but not so soon. SIA already has the latest-generation aircraft – they are confident on building demand on such routes, and the USA represents the next 'frontier' of network growth from Singapore or Southeast Asia and even Australia," says Shukor.

Fellow Asia-Pacific rival Qantas, for one, has said that it would issue a request for proposals on a new ultra-long-haul aircraft next year. The Australian carrier wants an aircraft that would allow it to launch nonstop flights from Sydney and Melbourne to London and New York around 2022. Group chief executive Alan Joyce has also nominated Chicago, as well as points in Brazil and European cities as later possibilities.

Shukor says that although Qantas could hit the same points as SIA, its ultra-long-haul target segment is that of the wider travelling public, instead of a premium focus. Moreover, Qantas will be able to leverage its multiple hubs across Australia (Sydney, Melbourne, Brisbane, Adelaide and Perth) to generate demand for these ultra-long-haul routes.

Building market dominance on its ultra-long-haul routes will be high on SIA's agenda in the coming years.

"SIA is one of the very few airlines in the world that can afford to launch ultra-long-haul flights. They are cash rich and have built up a strong financial profile, which allows them to acquire the latest new-generation aircraft and means they can better withstand losses," says Shukor.

"This new makeover [of the SIA Group] has seen them pass on the short-haul and other regional and long-haul services to [low-cost unit] Scoot, which themselves are doing very well and cater to a different market segment. Going long-haul and ultra-long-haul with a premium product clearly means that SIA is focusing on the high net worth segment of travellers."