One prominent British aerospace champion looks to have dodged a Brexit bullet, with Surrey Satellite Technology (SSTL) seeing off “fierce competition” to build the payloads for Europe’s next batch of navigation satellites.

As talks got under way last week in Brussels to set the terms of the UK’s exit from the EU, SSTL set to work on building eight navigation payloads to complete Europe’s 30-satellite Galileo navigation constellation. SSTL supplies OHB-System, of Germany, chosen by the European Commission as prime contractor for the final batch of spacecraft.

SSTL has already supplied OHB with payloads – including the critical atomic clocks and antennas, navigation signal generators and high-power travelling wave tube amplifiers – for 22 Galileo units, 14 of which are now in orbit. But while Europe’s bid to establish sovereign control over what Brussels regards as a strategically critical 21st century technology has so far been a technical success, SSTL’s continued place in the supply chain has looked precarious since British voters chose to exit the EU. The UK’s expected March 2019 departure from the EU falls in the middle of the contract period, and the prospect of valuable ongoing business drew industry heavyweights Thales Alenia Space and Airbus Defence & Space to bid to replace OHB.

SSTL director of navigation Gary Lay told FlightGlobal that the EC reasonably asked why, on the eve of Brexit, it should select a UK company – the answer being that the UK is still a member of the EU, and the OHB-SSTL offer was “compelling”. Significantly, he says, the tender was set to give OHB and SSTL no financial advantage in incumbency. The EC considered issuing two four-spacecraft contracts, but opted for the cheaper and more reliable route of a single contract; many components come from sole suppliers which were expected to struggle to satisfy two prime contractors.

But, he adds, while SSTL is very pleased to have won, the path to a signature on the final-batch contract, worth €140 million ($157 million) to SSTL, remains subject to political risks. The problem is, the work will take three years, with the first payload to be delivered to OHB in 23 months, just after the UK is set to leave Europe.

So, SSTL is working out how to respond to several possible ways that Brexit might pan out. If the Brexit negotiations lead to a delayed exit, or if the UK government is successful in negotiating the country’s continued participation in Europe’s Galileo, Copernicus (Earth observation) and Horizon 2020 (research) programmes, SSTL may simply see out the contract.

However, more thorny prospects must be considered. If no such arrangements are agreed, or if an “extremely hard Brexit” sees Britain make a cliff-edge crash out of the EU, SSTL will have to be prepared to move classified parts of the work to OHB in Germany. And, Lay adds, SSTL is so far working under an authority to proceed from OHB – but detailed negotiations of the third-batch contract will not be complete for another three months and could include a clause forcing termination in the event that Brexit creates a discontinuity in SSTL’s legal standing. Regardless, then, of what the future holds for the EU-UK relationship, contract terms could force SSTL to decide against going ahead.

OHB, TAS and Airbus (parent company of SSTL, whose Galileo work pre-dates its acquisition) were all eyeing significant future contracts. The original Galileo constellation is on track for completion in 2020, but the European Space Agency has already begun to define a second generation of satellites. Those satellites will not be ready to fly for seven or eight years, but OHB’s latest contract includes six options to supply current-generation equipment in the event of on-orbit malfunction or launch failure.

Meanwhile, a technical issue that threatened to derail plans to press ahead with Galileo launches has been resolved. Early this year it emerged that a number of European-made atomic clocks – three rubidium units and seven more advanced and more accurate hydrogen maser units – aboard orbiting Galileo spacecraft had failed. Each satellite carries two clocks and none had suffered double failures, but launch plans were on hold pending resolution. Lay says the fault with the rubidium clocks was traced to a component costing “a few dollars” that is being replaced in spacecraft awaiting launch, and will not affect the units currently being built at SSTL. The issue with the maser clocks, a highly accurate technology being pioneered in Europe, has been resolved by, principally, an operational adjustment. The next launch, then, will go ahead later this year from Europe’s spaceport in French Guiana and will be the second outing for an Ariane 5 rocket modified to orbit four Galileos. That flight will take the number in orbit to 22, bringing the constellation close to full service. 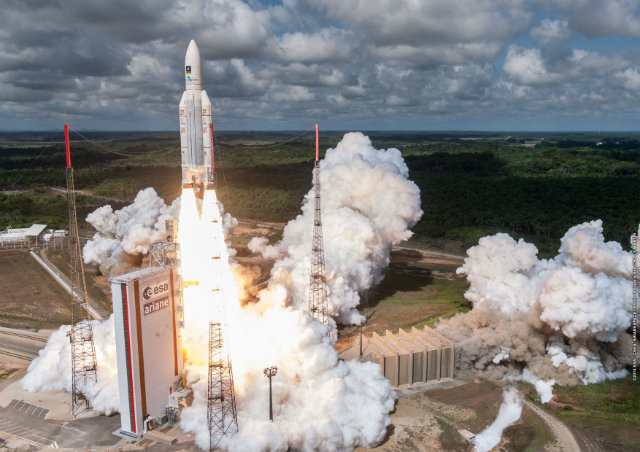 While Galileo has momentum today, its early history was one of fits and starts. Conceived in the late 1990s and first agreed at the European level in 2003, by 2007 it was adrift amid technical issues and budget wrangling, leaving the EC to decide in 2008 to fund the project entirely from the EU budget.

It was not until 2011, though, that then-commission vice-president for industry and entrepreneurship Antonio Tajani made the realisation of Galileo a cornerstone of his tenure. That year he brokered an agreement to break a cycle of delays by winning a concession from industrial partners to cut €500 million from the programme’s industrial costs to fund the purchase of enough satellites for near-global coverage and initiate a fast-track launch schedule.

Tajani’s determination reflected the Brussels view, which still prevails, that satellite navigation is a critical capability over which Europe must have sovereign control. Unlike the USA’s military-operated GPS system, Galileo was designed from the start for civilian use and oversight. And, technically it will offer some advantages over GPS, notably better performance at high latitudes – an obvious European priority. Galileo, which will be compatible with GPS and Russia’s Glonass, also claims to be the first satellite system to integrate a global search and rescue function providing almost real-time localisation of distress calls.