Large unmanned air vehicles (UAVs) have arguably reached their current level of technical sophistication thanks to the development investment – and operational experience – that has supported and advanced their military uses over the past couple of decades.

In terms of capability, flexibility, reliability and safety, military-grade systems are arguably near peers to crewed platforms, so it is no surprise that there is growing interest in their adaptation to civilian or para-public roles.

The motivation to find civil applications for this new technology has a parallel in the post-Vietnam War period in the USA. There, the helicopter industry – and pilots experienced with the capability of a new generation of reliable, well-optimised machines – pioneered in the 1970s their use by police departments and as air ambulances.

For UAVs today, civil applications with some natural crossover include disaster relief support, firefighting and maritime surveillance. For emergency functions carried out in often dangerous environments – or over water – UAVs are inherently attractive because of their endurance and the relatively low cost of a loss. In addition, airspace restrictions are easier to deal with than they would be for daily routines such as parcel delivery in urban areas, for example.

To this end, in recent months the European Maritime Safety Agency (EMSA) and the EU’s Frontex border and coastguard agency have been contracting a number of military-grade UAVs to carry out surveillance programmes in waters around Europe, typically undertaking two-year service provision programmes in support of missions such as monitoring the movement of people and environmental data collection. 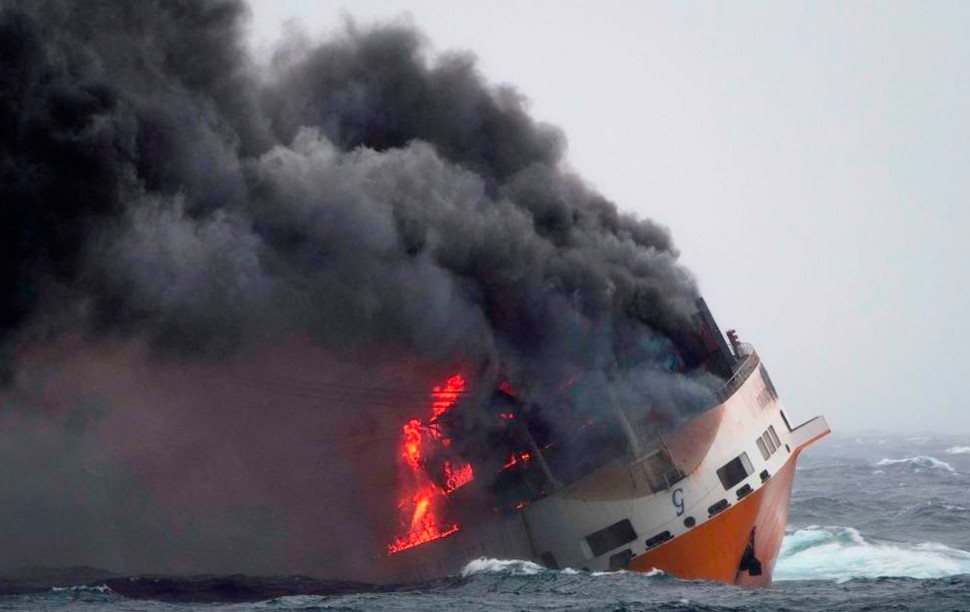 During the last few weeks of 2018, EMSA signed a string of remotely piloted air system contracts to meet growing demand for the patrol services it supplies to other European agencies and member-state coastguards.

For long-range, long-endurance surveillance, EMSA contracted Portugal-based structures and systems engineers CEiiA to provide services based on an Elbit Systems Hermes 900 medium-altitude, long-endurance (MALE) UAV adapted for maritime patrol, which it will subcontract from Elbit.

EMSA says the operational flight duration will be more than 12h, with a payload of electro-optical/infrared (EO/IR) cameras, a multimode maritime radar and distress signal receiver; the aircraft will also carry an automatic identification system (AIS) receiver – the maritime counterpart of the automatic dependent surveillance – broadcast system used to track and identify aircraft.

EMSA adds that CEiiA’s Hermes 900 is enabled for satellite communications to monitor large maritime areas beyond radio line of sight.

According to Elbit, the contract, worth up to $68 million, will run for two years, with two single-year option periods. Elad Aharonson, general manager of Elbit’s intelligence, surveillance, target acquisition and reconnaissance division, says the EU contract is ­“another vote of confidence” in the Hermes 900, which is “extensively deployed” in Asia-Pacific, Europe, Israel and Latin America.

The Hermes 900 would appear to be an ideal solution for the coastguard mission. The MALE platform has a maximum take-off weight of 1,180kg (2,600lb) including 380kg of payload; endurance is up to 36h, with a service ceiling of 30,000ft.

Described by Elbit as “highly autonomous and mission effective”, the aircraft offers multiple hardpoints and a 250kg modular payload installation bay, as well as both satellite and line-of-sight data links. With multispectral payloads it is suitable for wide-area surveillance and mapping – and features “adverse weather capabilities”. 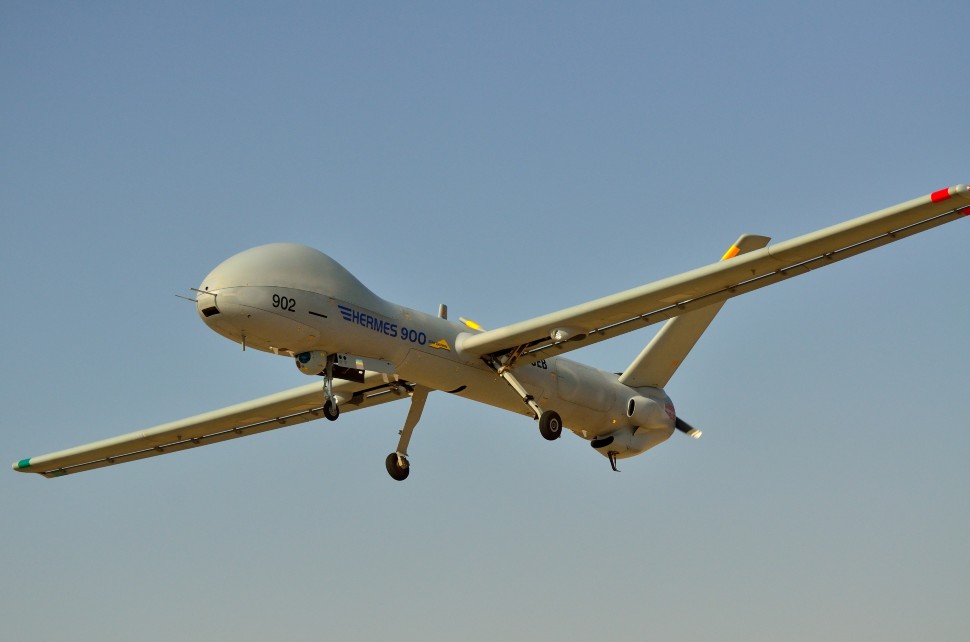 EMSA has also contracted with Schiebel Aircraft to fly its Camcopter S-100 – a helicopter that can be operated directly from ships to extend their range of surveillance. In EMSA service, the Camcopter S-100 will have more than 6h of operational flight time with a maximum range of 54nm (100km).

While exact details on the type of mission have not been revealed, the company says the UAV was selected based on its “impressive service record in the maritime domain”, as well as its ability to be operated from either the shore or from a vessel.

Another vertical take-off and landing type, the Skeldar V-200, supplied by a three-party consortium comprising Nordic Unmanned, the Norut Northern Research Institute and UMS Skeldar Sweden will monitor emissions. Its payload features EO/IR cameras and an AIS receiver, with an endurance of 4h and a 27nm range.

Two Skeldar systems will be available for use throughout the test phase, and two sets of crews will support the service-based operation, according to UMS Skeldar head of business development David Willems.

The two systems will each carry different sensor sets and will include a gas emission sensor to detect sulphur in support of a European initiative to reduce the pollutant tenfold over the coming years. They will be shore-based but will fly out over the sea, monitoring exhaust emissions and feeding them back to EMSA’s headquarters in Lisbon.

Willems notes that this type of environmental testing is not new for Skeldar, but the EMSA contract is the first time that it will be carrying out such work on an ongoing basis.

EMSA executive director Markku Mylly adds that in addition to monitoring pollution and emissions and supporting search and rescue operations, these remotely piloted systems may be used “in the areas of illegal fishing detection, anti-drug trafficking and border surveillance”.

Separately, Leonardo announced in December 2018 that it had been contracted to carry out similar work for Frontex. For that mission, Leonardo will deploy its Falco Evo tactical UAV on a services basis to carry out up to 300h of maritime patrol surveillance within Italian and Maltese airspace.

This will be conducted to test the ability of a UAV to monitor the external borders of the EU, with flights conducted from Lampedusa airport in Italy.

Italy’s Guardia di Finanza will co-ordinate the flights under the remit of the interior ministry. In addition, Leonardo will collaborate with Italian air navigation services ­provider ENAV and the Italian civil aviation authority.

A new maritime-roled configuration for Falco Evo has been developed by the company to meet the expected demand for the UAV for this type of operation, which includes a new heavy-fuel propulsion system, high-definition EO/IR imaging, beyond-line-of-sight satellite datalink, AIS and a communications relay suite.

The Falco Evo will also carry Leonardo’s Gabbiano TS Ultra-Light radar for the project, which will allow it to carry out day and night missions.

The 650kg maximum take-off weight aircraft can provide up to 20h endurance with a maximum payload “in excess of 100kg”, and has a service ceiling of 19,600ft. 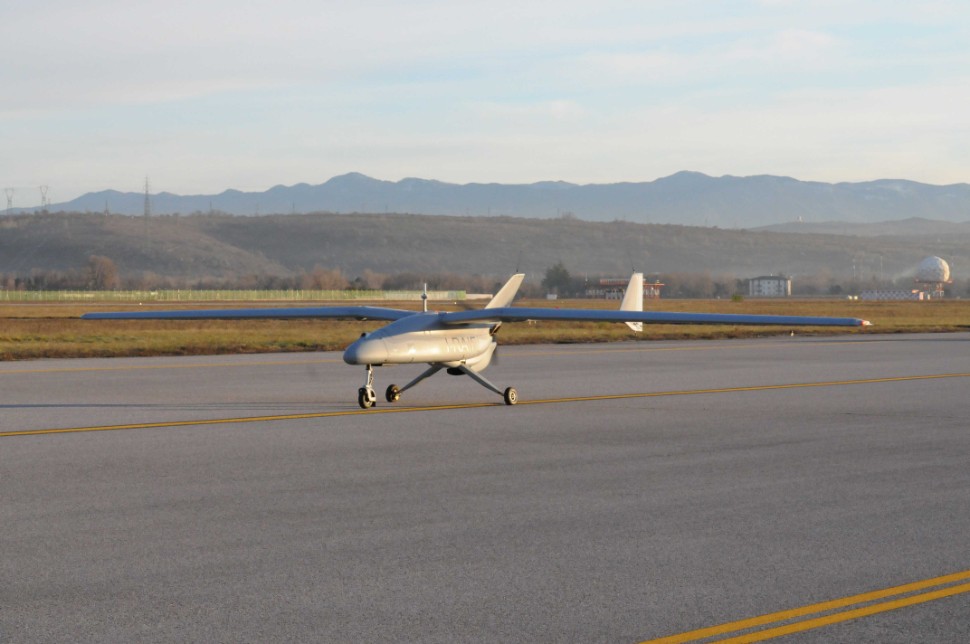 Leonardo is also planning to test the radar on its SD-150 Hero rotary-wing UAV in support of the European Defence Fund-supported Ocean 2020 project, a 42-partner unmanned maritime surveillance test programme led by the company that will kick off this year, with the Gabbiano testing scheduled for the third quarter of 2019.

Two demonstrations are expected to be carried out under Ocean 2020 in the Mediterranean and Baltic seas, testing two different operational scenarios using various assets.

They will explore a number of overarching aims that the project wishes to achieve, namely exploring how maritime situational awareness can be increased by using UAVs, how Europe can extend the range and performance of maritime intelligence, surveillance, target acquisition and reconnaissance, and achieving EU-NATO interoperability by using open architectures and standards.