Back in November 2010, then-Lt Cdr James Blackmore became the last pilot of a BAE Systems Harrier to launch from the flightdeck of the Royal Navy aircraft carrier HMS Ark Royal, bringing to an end three decades of shipborne short take-off and vertical landing (STOVL) operations from the service's three Invincible-class carriers.

In a circuitous arc, now Cdr Blackmore will in five months oversee the re-birth of fixed-wing aviation in the RN, as HMS Queen Elizabeth – the first of its two new 65,000t aircraft carriers – begins first of class flying trials (FOCFT) with STOVL aircraft of an altogether different kind.

The purpose of the FOCFT activity is to validate design modelling and support the production of the full ship/air integration release. To achieve these objectives necessitates operating the aircraft and ship in a wide range of load, motion, wind and environmental conditions, using instrumentation to capture detailed trials data. These individual test points are used to define the limits of the safe operating envelope. 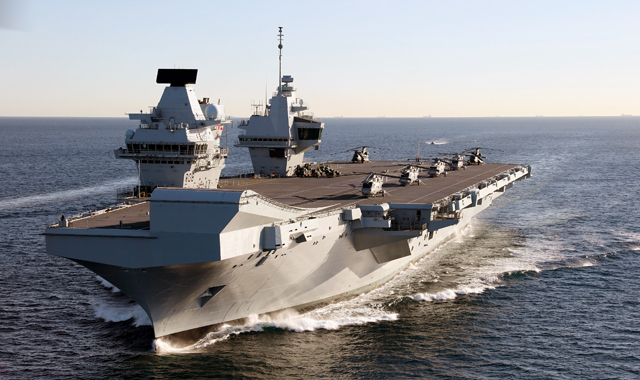 The 65,000t HMS Queen Elizabeth has already performed operational trials with helicopters aboard: its next arrival will be the Lightning II

As Commander Air – a role that sees him in overall control of aviation operations in, on and around the carrier – Blackmore and his air department will manage the FOCFT flying programme from the flying control (FLYCO) office extending out from Queen Elizabeth’s aft island.

"This ship is over three times the size of our previous aircraft carriers, and the flightdeck is two-and-a-half times bigger," he tells FlightGlobal. "So we’ve got much more area to park and operate helicopters and jets. And while the ship is a little smaller than a US Navy carrier, the deck area we’ve got is roughly similar."

FLYCO is the focal point for aviation control. "That’s what's happening on the flightdeck and in the hangars and into the airspace around the ship itself," says Blackmore. "We’ve got full visibility across the deck, plus all the sensor feeds displayed on various screens, so we have massive situational awareness."

Also housed in FLYCO is the landing signals officer (LSO): a qualified fixed-wing aviator trained to assist pilots to safely recover to the carrier.

Already through rotary-wing flight trials, Queen Elizabeth will set sail from Portsmouth in August to begin the four-month WESTLANT 18 deployment. But while the embarkation of ITF development aircraft BF-04 and BF-05 will mark the first time that the F-35B has operated from the carrier, a nucleus of RN personnel is already familiar with the operation of the aircraft, thanks to a unique ship/air simulation environment built by BAE at its Warton site in Lancashire, northwest England.

Previously used to de-risk the integration of the F-35B and the Queen Elizabeth-class (QEC) carriers, the simulator facility has more recently been employed to develop standard operating procedures for aviation operations on board.

Bringing the F-35B and vessels together presents both a unique opportunity and a complex challenge. The fact that the aircraft and ship are both new means it has been possible, to a greater extent, to optimise the carrier design to operate and support the STOVL variant of the fifth-generation Lightning II.

At the same time, a number of uncertainties have necessarily arisen from the fact that design, development and demonstration activities for the F-35B and new RN ships have effectively been run in parallel, albeit with some excursions en route.

Piloted flight simulation has played a major part in identifying and assessing integration issues well ahead of FOCFT. In 2007, BAE established an F-35/QEC integration facility in Warton as a tool to help characterise and de-risk the ship/air interface.

This facility, which adapted an existing motion dome simulator, was used to test the capabilities of both the aircraft and ship aviation systems, allowing integration issues to be ironed out early, informing options and choices, and enabling design changes to be implemented at a stage when their cost and programme impact was relatively small.

Having begun as a piloted flight simulation environment, the facility was enhanced in 2011 by the addition of a simulation of the LSO workstation. Networking these two entities provided for a realistic simulation of pilot and LSO interaction to allow for a more rigorous assessment of the capabilities of the aircraft and ship systems.

While the original simulation facility made a valuable contribution to F-35/QEC integration, it was recognised that it had some inherent limitations with regard to pilot field of view, motion response and cockpit fidelity. As a result, BAE took the decision in 2014 to invest in the development of a new and improved facility that could support ship/air integration through to FOCFT.

Commissioned last year, this updated simulation environment integrates two components: a fully representative F-35 cockpit mounted on a six-axis electric motion system inside a fixed-radius dome featuring a high-fidelity carrier model together with a dynamic sea surface; and an adjacent facility, fully integrated with the piloted simulator, that simulates the environment inside and "outside" FLYCO.

The representative FLYCO space includes a replica of the LSO workstation looking aft. A widescreen projection system shows a realistic outside world scene: visuals can include a selection of pre-recorded take-offs/recoveries, and/or "live" flights being conducted by the pilot in the adjacent flight simulator.

The first use for the new facility was to support a series of pilot evaluations of the short rolling vertical landing (SRVL) recovery manoeuvre. Designed to significantly increase "bring-back" performance, an SRVL exploits the ability of the F-35B to use vectored thrust to maintain limited forward speed until after touchdown.

SRVL will be part of the forthcoming flying trials, says Blackmore. "It allows us to be more flexible with the way we use the deck, and more flexible in the way we bring our aircraft back because of the performance enhancements it brings."

Earlier this year, the focus of activities at Warton switched to initial preparations for FOCFT and supporting wider operational development. For a week in late March, personnel from Queen Elizabeth’s FLYCO worked together with a team of naval F-35B pilots from the UK's 17 Test and Evaluation Sqn (functioning as LSOs) and an ITF test pilot to develop and practise standard operating procedures for fixed-wing operations.

"This presented a first opportunity to train together and get ready to bring the aircraft on for real this autumn," Blackmore explains. "We plan to come back for a second period of simulator work in June, which will be a more structured ‘rehearsal’.

"This is a really good way of de-risking and understanding that process. In fact, we’ve gone beyond what we’re going to do in the autumn [and have] started to explore what operations will look like once we've fully delivered the capability – so, the ability to operate beyond four aircraft, multiple vertical landings, as well as bringing in the shipborne rolling vertical landing, which is a novel landing manoeuvre we are introducing with QEC.”

Cdr Nathan Gray offers a pilot’s perspective on the Warton simulator. A former Sea Harrier FA2 pilot who subsequently flew the Harrier GR7/9 and, on exchange, the US Marine Corps' Boeing AV-8B Harrier II, he currently serves as a developmental test pilot in the F-35 ITF, and is one of the three UK pilots assigned to the forthcoming FOCFT programme. 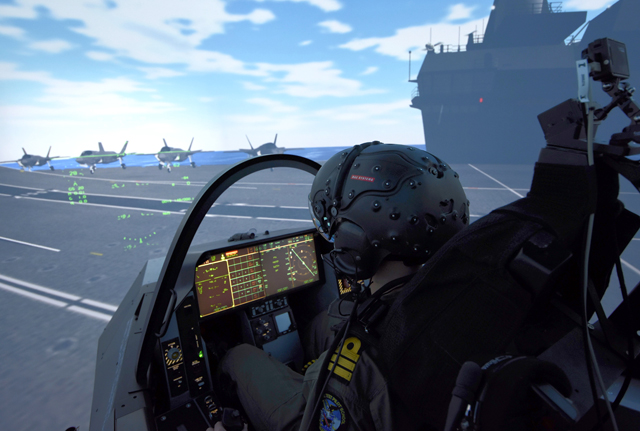 "We are just months away from landing the first F-35 on Queen Elizabeth, so it is critical now that we get procedures in place," says Gray. "Although these will be adapted as we go forward and gain a greater understanding of what capabilities we have, we still need that sound foundation of good practice, so we need to make sure that our initial decisions are the right decisions.

"That’s why this simulation facility is a tremendous asset to our programme. When you walk into FLYCO and you see the environment around you – the sea and the motion of the ship – as a maritime aviator, you get that knot in your stomach. You feel like you're at sea.

"From the aircraft standpoint, it's the most realistic simulator that I have ever flown, he says. "It's full motion, with the helmet and full symbology, a highly representative cockpit environment, and the 'outside world' graphics. This is the only simulator-unique facility in the world where we've combined the true F-35 air vehicle model with air wakes from computational fluid dynamics and with ship motion. All three have been brought together and then plugged in with a FLYCO simulator so we can run real-time motion."

Gray believes the UK is now as prepared as it can be to bring the F-35B on board Queen Elizabeth. "The aircraft development programme is complete, we've completed ski-jump testing at Pax River and we have all the learning from the simulation environment here. The test plan has been finalised, [and] we've got the evidence base so that we believe we know where the boundaries are. That said, simulator models can only be trusted so far. So we have to use our intelligent reasoning to slowly progress the flight trials, steadily working outwards from the centre of the envelope."

DT-1 and DT-2 will each amount to about three weeks of flying, with a week of downtime between. "There are going to be days when the weather doesn't support flight testing," notes Gray. “So we have to find very benign conditions in the initial stages, and then as the tests progress, we have to go and find the harsher conditions.

"The biggest constraint will probably be the weather, because it only gets so bad on the east coast. Our challenge will be to predict where those sea states are [and] where we believe we are going to get that ship motion and the wind conditions."

While FOCFT will establish ship clearances for the F-35B, further development and operational testing will be required ahead of the UK declaring initial operating capability (Maritime) at the end of December 2020. A first operational deployment will follow in 2021, with Queen Elizabeth to embark a USMC F-35B squadron alongside aircraft from the UK's Lightning Force.

"To be part of the Carrier Strike programme, and to know that this is our lasting legacy, is very exciting," says Gray. "We’ve got an aircraft and a carrier that will change the way we do business, and the way that the UK can project power."