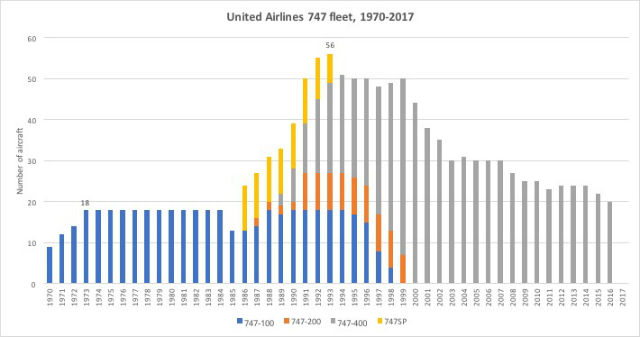 "It's a bittersweet milestone – this jumbo jet with its unmistakable silhouette once represented the state-of-the-art in air travel," said Scott Kirby, president of United, on the 747 retirement in a January letter to employees.

"[The Boeing 747's] size and operational capabilities will provide travellers and shippers with the finest in air transportation," United wrote in its 1969 annual report that was published three months before the first jumbo jet arrived.

The airline's first 747-100 was the de facto flagship, or "Friend Ship" as it was referred to in marketing material, of its fleet at the time. Configured with 342 seats, including a new "Red Carpet Room" lounge on the upper deck, the first nine were rolled out on US transcontinental routes and from Chicago to the West Coast after the Hawaii launch in July 1970.

The introduction of the jumbo was not without its hitches. Flight instructors, rather than pilots, had to fly the inaugural flight to Hawaii as United and its union had yet to reach contract terms for the new 747, The Wall Street Journal reported at the time.

All the 747 glitter was not to be gold for United, at least not at first. The carrier lost $40.9 million in 1970, roughly $261 million in today's dollars, due among other things to industry overcapacity and the introduction of "very large wide-bodied aircraft", United president Edward Carlson wrote in its 1970 annual report published in March 1971.

Carlson, who replaced George Keck on account of the airline's poor financial performance, embarked on a series of cost savings initiatives that included deferring four 747 deliveries to 1973 from 1971.

When asked if he regretted the development of the 747, Carlson told The New York Times that April: "No, I think the timing is unfortunate because the plane which had to be ordered by the industry some time ago came on line when the economy was in a serious slump, but it is a good airplane and it's going to do a great deal for the industry."

The 747 would come to symbolise the carrier's Pacific network, with the 747-400 opening new routes such as Chicago-Hong Kong and replacing the smaller 747SP to Australia and other markets in the years after its introduction in 1989.

Continental Airlines, which merged with United in 2010, had its own brief 747 legacy. The airline was among the first to order the jumbo, committing to three in October 1966, a month before United, Boeing's database shows.

The then Los Angeles-based carrier debuted the jumbo jet on 26 June 1970 on flights between Chicago and Honolulu via Los Angeles.

However, Continental's first jumbo jet foray would last only until 1975 when it sold the last of its first four aircraft, Fleets Analyzer shows. One went to Wardair Canada while three were acquired by the government of Iran.

The 747 rejoined Continental's fleet when the airline acquired People Express in February 1987. The Newark-based discounter added two 747-100s and six 747-200s to Continental, by then based in Houston.

The airline supplemented the People Express aircraft with a former British Airways 747-200 in 1990, for a peak of nine aircraft that year, Fleets Analyzer shows.

The last Continental 747 was retired in 1995, Fleets Analyzer shows.