United Airlines president Scott Kirby offered harsh criticism of Frontier Airlines' day-old plans to launch 21 new routes from its Denver base by the spring of 2018.

"They've said they're going to run a connecting hub-and-spoke network in Denver – the model that they used to have, which wound up in bankruptcy," says Kirby during the Chicago-based carrier's second quarter earnings call today. "This is the first public validation of a ULCC [ultra low-cost carrier]... throwing in the towel on the point-to-point business model and switching to a network model."

United is the largest carrier in Denver, where it had a 42% share of traffic compared to Frontier's 12.2% share in 2016, airport data shows. 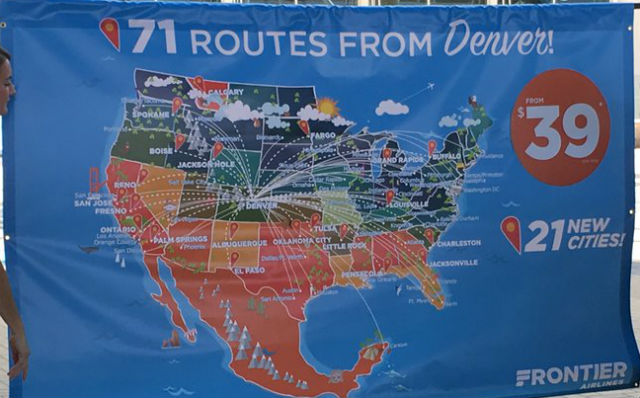 The Denver markets were part of an announcement of 21 new cities and 85 new routes that the ULCC bills as nearly doubling the number of routes it serves by the summer of 2018.

"Customers will benefit not only from the broad new selection of nonstop routes, but our growing network will provide more than 1,000 new connecting route options,” said Barry Biffle, chief executive of Frontier, in a statement.

Biffle, citing plans to capture connecting traffic over Denver, affirms Kirby's comments that the airline is moving back to the hub-and-spoke model it eschewed when it opted to "right size" its Denver hub and move to a more point-to-point model in 2014.

Frontier's latest announcement continues a network strategy that has been unpredictable for the past few years. The carrier has entered markets only to drop them within months of launch and, in a few cases, dropped them before service even began.

For example, the airline opened a base at New Castle airport near Wilmington, Delaware, with much fanfare in 2013 only to end all of the service by mid-2015.

"We are… faced with escalating taxes and airport charges at Denver International airport," said Frontier then-chief executive Dave Siegel in a letter to employees in November 2015. “The cumulative effect of these increasing costs is that connecting traffic is no longer profitable for our airline.”

The carrier subsequently cut 15 flights and about 40% of its seat capacity in Denver, ending service to seven of the 21 cities that it plans to launch by 2018.

Frontier has focused on adding limited frequency, point-to-point routes in the two years since, building up – and in some cases pulling back down – focus cities at a myriad of airports, including Atlanta, Miami, Philadelphia and Washington Dulles.

The strategy appeared to be working. The carrier reported a $200 million net profit on a $317 million operating profit in 2016, in its initial public offering (IPO) filing in March.

The new connecting-traffic focused approach will see Frontier return to 18 markets in Denver that it has previously served, FlightGlobal schedules show. Only Buffalo, Charleston (South Carolina) and Pensacola are completely new. 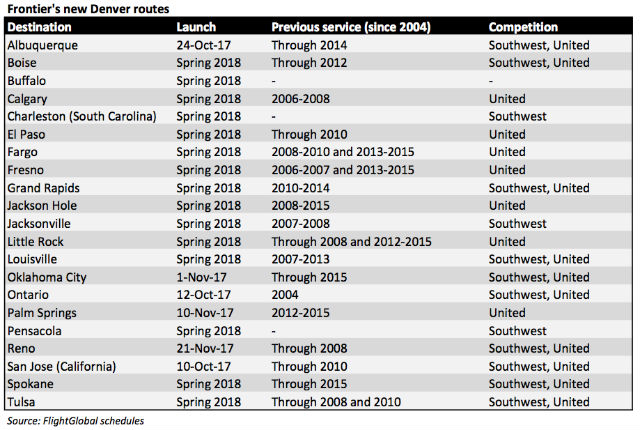 "For Frontier, to publicly acknowledge that the old business model has run out of growth opportunities in the middle of an IPO process, I view as phenomenal validation [that] everything we've done has worked," says Kirby.

Frontier's strategy shift confirms his belief that an ULCC cannot compete with a traditional network carrier when the latter competes on price, for example United's newly rolled out basic economy fares, says Kirby.

While it may be too early to claim a victory for United's basic economy fares which only debuted in February, the market saw a similar phenomenon in Dallas/Fort Worth where American Airlines successfully halted the rapid growth of Spirit Airlines by price matching.

Miramar, Florida-based Spirit grew seat capacity in Dallas/Fort Worth at a compound annual rate of 50% from 2011 to 2015, peaking at 3.19 million seats, schedules show. This growth coincided with American's Chapter 11 bankruptcy reorganisation that ended with its merger with US Airways in December 2013.

Spirit has shrunk at the North Texas airport by more than 6% to 2.99 million seats this year since 2015, according to schedules.

"I can promise you they're now competing on our turf and trying to be a network carrier in Denver, that is a battle I guarantee you United will win," says Kirby, who joined United from American nearly a year ago.

LESS THAN IT APPEARS

Frontier's headline network growth is not as expansive as it appears. Many of the new routes will operate less than daily frequencies and a good number are seasonal, though the carrier does not disclose which are and which are not.

In addition, the airline will end service on 18 existing routes and seasonally suspend service on another 32 routes by December as many of the new markets are spooling up, schedules show.

The 18 routes Frontier will discontinue by December 2017 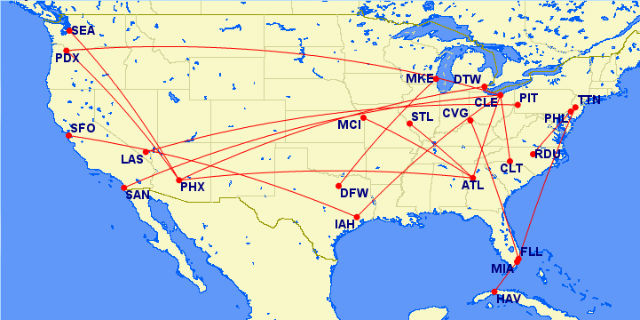 Frontier "will increase the number of destinations served by the low-fare carrier by 30 percent and double the number of total routes", a spokesman says in response to the reductions.

How the carrier will support the expansion has raised questions. Some industry analysts are asking where Frontier will source the aircraft as well as whether it has sufficient resources on the ground, especially at its Denver base where it returned six gates to the airport in 2015 as part of its right-sizing initiative.

Frontier is adding 17 aircraft to its fleet this year and is scheduled to add another 16 in 2018, its IPO filing showed. Deliveries in 2017 include 11 Airbus A320neos and six Airbus A321s.

Considering Frontier's checkered history expanding and keeping new markets, many doubt that all of the new routes will stick. Whether an expanded connecting hub in Denver will work this time around is anyone's guess, but the airline faces more formidible foes in both Southwest Airlines and United there than it did when it right sized in 2015.