United Airlines is defining the future of its Newark Liberty and Washington Dulles hubs as it continues to focus on growing its US domestic market share.

The Star Alliance carrier is expanding in markets that serve local passengers at Newark and connecting flows at Dulles, said Ankit Gupta, vice-president of domestic network planning at United, speaking at ACI-NA’s JumpStart conference in Cleveland.

"We're moving some of our flying that was highly, highly flow passenger-based into Dulles, and we're expanding the footprint for the local passenger base [in Newark]," he says.

This strategy is reflected in United's plans to add frequency to more than 15 destinations popular with local passengers from Newark, including Charleston (South Carolina), Nashville and Phoenix, in October. At the same time, it will end service in markets that carry a high proportion of connecting passengers, including Baltimore/Washington and Hartford.

In addition, the airline will shift flights to Chattanooga, Ithaca and Wilkes-Barre/Scranton, which Gupta says carry roughly 90% of connecting traffic, to Washington Dulles from Newark.

"Dulles… is a great connecting hub for us," says Gupta. "We want to position Dulles as somewhere you can travel from across the globe… but also be able to connect to from all up and down the East Coast." 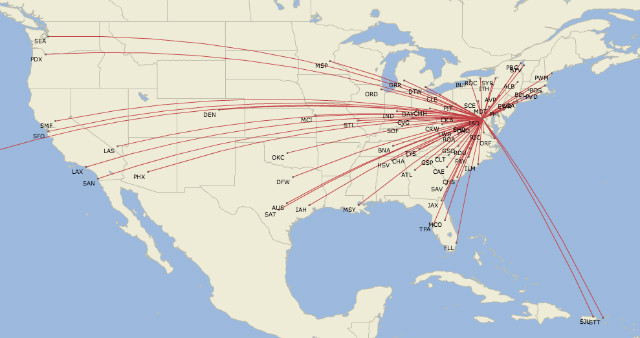 "It's no secret that Dulles is a better connecting hub than Newark," Gupta tells FlightGlobal on the sidelines of the conference.

Dulles, which is located about 42km (26 miles) from downtown Washington DC, lacks the congestion, both on the ground and in the air, of Newark. The airport has four runways and ample terminal facilities, which United has said that it only maximises once a day for its transatlantic departures in the late afternoon.

Growth for United at Dulles, however, is limited by its larger network priorities, says Gupta. The carrier is focused on expanding connecting traffic over its mid-continent hubs in Chicago O'Hare, Denver and Houston Intercontinental first, with Washington Dulles further down the list.

When aircraft do become available for further growth at Dulles, additional service to the southeastern USA and increased frequencies on existing routes, for example adding another bank at its underutilised facilities at the airport, are all on the table, says Gupta.

"That north-southeast flow we practically take no part in," says Gupta, who adds that Dulles is uniquely positioned in United's network to capture some of that flow.

Florida is one example where United could grow from Dulles to capture north-south connecting traffic. The airline only serves four destinations in the state – Fort Lauderdale, Jacksonville, Orlando and Tampa – from the airport, whereas American Airlines and Delta Air Lines both serve 16 destinations in Florida from their respective Charlotte and Atlanta hubs, which both capture significant north-south flows.

Washington Dulles operator the Metropolitan Washington Airports Authority (MWAA) is working to enable further growth at the airport as well. Its multi-year effort to reduce airline expenses are beginning to pay off with the average cost to carry one passenger from Dulles falling to $17 last year, the first time below $20 since 2010.

United wants to recapture the leadership in New York that Continental Airlines, which it merged with in 2010, once had in the region. To that end, it hired Jill Kaplan as its first dedicated executive tasked with promoting United in the New York area in November 2017, and has invested in its facilities at the airport including a new Polaris premium lounge that opened at the end of May.

The network changes discussed by Gupta work to address this by adding service to where local passengers want to go, while at the same ending service to connecting points over the airport. 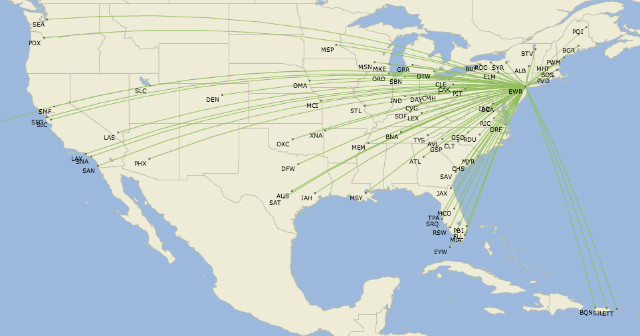 United will continue to grow at Newark, which faces significant capacity constraints, with larger gauge aircraft, says Kirby. He expects that, within a decade, it will operate "close to all mainline operations" at the airport.

"We're starting down a road here in Newark, while we can't really add more flights because the airport is full, what we can do is upgauge across the board," he says.

That shift to a largely mainline operation at Newark is still coming though, schedules data shows. Mainline flying is flat at about 53.5% of all United flights there in the second half of the year compared to the same period in 2017, while at the same time flying by 50-seat Embraer ERJ-145s will rise by one percentage point to 29.1%.

The same factors that limit United's growth at Washington Dulles are at play in Newark as well. Newark, while a strategically important market, is not one of the three mid-continent hubs where the airline is focusing its growth this year.

The carrier can only make net additions of 50-seat regional jets to its feeder fleet because of a scope clause that limits it to 255 large, two-class regional jets, a number that it reached in 2017.