If an aircraft's first flight is successful, the only excitement is on the ground and never in the air. So it was on 28 February 1998, with the first take-off of the Ryan Aeronautical Global Hawk – a futuristic-looking demonstrator described by three key adjectives: unmanned, jet-powered and high-altitude.

That flight over Palmdale, California, 20 years ago seemed appropriately boring: several right and left turns to check handling qualities, followed by a near-perfect, automated landing 56min later, with the nose wheel touching down within 15cm (6in) of the runway centreline.

Lauren Stevens, Northrop Grumman's vice-president and programme manager for the Global Hawk, missed that first flight in 1998. As a new employee working on the company's B-2 bomber, she was working in another office in Palmdale. But she has heard all the stories, including witnesses who described "when it landed… all the cheering that you could hear and everybody finally breathing over the [flight test communication] system", Stevens says.

In retrospect, those witnesses had much to cheer that day in Palmdale. Only the cleverest optimist could have predicted how the Global Hawk story would develop over the next two decades – and how it continues to evolve today. 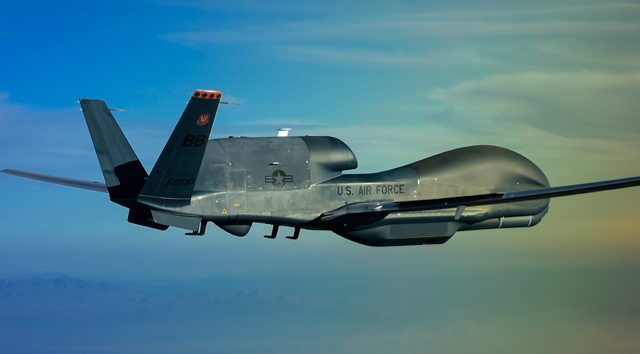 The programme outlived its original corporate owner, as Ryan was acquired by Northrop in 1999. It survived the crash of the second air vehicle that same year – which destroyed the Global Hawk's first integrated sensor payload – when flight-test engineers on the ground accidentally tested a flight termination command while the aircraft was still airborne. And it continued despite an attempt by the US Air Force in 2012 to terminate production of the signals intelligence (SIGINT)-carrying RQ-4 Block 30 fleet and place the delivered fleet into storage.

As the Global Hawk fleet passes the 20th anniversary of its first flight, the future looks bright.

In addition to the $8.1 billion programme to develop and deliver 63 MQ-4C Tritons to the US Navy, Northrop has delivered a total of 43 RQ-4s to the USAF, including seven Block 10s (since retired or donated to NASA), six Block 20s now used for communications relay, one EuroHawk for the German air force (also retired), 18 Block 30s with the airborne signals intelligence payload (ASIP) and the Raytheon enhanced integrated sensor suite (EISS) and 11 Block 40s with the Northrop/Raytheon MP-RTIP synthetic aperture radar. Another 15 Block 30 aircraft are in the company's backlog, including three for the USAF, five for NATO, four for South Korea and three for Japan.

As the global fleet continues to expand, the role of the RQ-4 Block 30 as a single-mission, SIGINT aircraft is changing, with several new payloads and upgrades in the pipeline. Meanwhile, the proposed demise of the USAF's Northrop E-8C JSTARS ground surveillance aircraft fleet offers new a new opportunity for upgrades to the Block 40 fleet, whose MP-RTIP radar can perform a similar mission.

With an active joint production line of RQ-4s and MQ-4Cs in Palmdale available for several more years, the possibility of selling more Global Hawks to the air force also remains on the table.

"We hear from air force officials all the time about their insatiable need and their appetite for actionable intelligence from wherever they can get it," Stevens says. "We are talking to the air force about what that looks like and what more they need."

In the meantime, the focus is on delivering new payloads and upgrades to the USAF fleet as quickly as possible.

In late February, the service formally asked Northrop to submit a proposal for the integrated functional capability (IFC) 9 upgrade package for the RQ-4 Block 30, Stevens says.

The IFC 9 package addresses several of the long-acknowledged gaps in capabilities between the RQ-4 and the older and larger Lockheed Martin U-2S Dragon Lady surveillance aircraft. One major upgrade is a software update that will allow operators on the ground to make in-flight changes to the RQ-4's flight path, according to USAF budget documents. 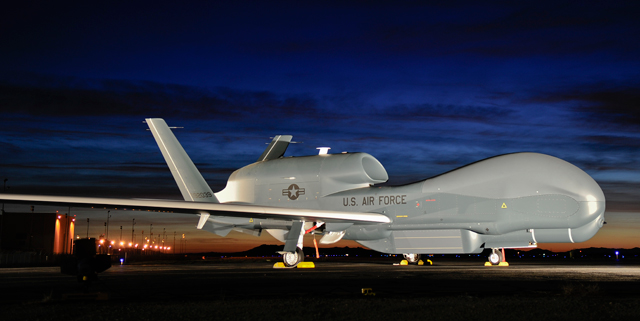 A Block 40 aircraft fitted with the MP-RTIP synthetic aperture radar, at the Palmdale centre

Most importantly, the IFC activity funds the integration of the optical bar camera (OBC), which captures panoramic displays from a side-looking, oblique angle. This wet-film sensor – now carried by only the U-2S fleet – survived the transition to digital sensors. It is required to fulfil the US government's obligations under the 1978 Camp David Accords with Israel and Egypt, which require regular overflights of the Sinai Peninsula with a sensor that produces wet film imagery.

Adding the OBC to the RQ-4 Block 30's repertoire will give the air force a new option for the Sinai overflight mission.

Integrating the wet-film sensor within the aircraft is not possible, as the space inside the fuselage is reserved for the existing ASIP and EISS payloads. As a result, Northrop last year upgraded the aircraft with the universal payload adaptor (UPA); a hollow bracket mounted on the fuselage belly. It serves like a port for a universal serial bus (USB), allowing Northrop to install and remove certain payloads with few changes.

In addition to the OBC, the UPA allows the RQ-4 to carry two other payloads, depending on the mission. The proposed options include two different versions of United Technology Aerospace Systems digital cameras: the senior year electro-optical reconnaissance system (SYERS)-2 and the MS-177 – a seven-band sensor with a gimbaled turret to rotate the field of view.

"That really paves the way for the future," Stevens says.

Northrop has already integrated the seven-band MS-177 inside the UPA, but that may not be enough. USAF officials now want the company to fit the 10-band MS-177A as quickly as possible.

"We are working with the US Air Force right now on integration of that capability," Stevens says. "That's going to pop up prior to IFC 9. We have just been awarded a contract to start working that integration activity."

The air force plans to buy six of the 10-band MS-177A payloads to split among the 21-strong RQ-4 Block 30 fleet. Two of the six payloads will involve retrofitting the seven-band MS-177 with the 10-band A-model, according to Northrop.

After completing development testing with the MS-177 in January, Northrop is preparing to support the USAF in an upcoming round of operational tests.

How long the RQ-4s can continue flying is still a mystery – even to Northrop. As a result of the programme's origins as a demonstration sponsored by the US Defense Advanced Research Projects Agency, it skipped over certain steps normally required for a major acquisition programme. One of those missing steps during the development phase was the absence of a fatigue test article.

The oldest RQ-4 now in service – a Block 20 variant, which technically is designated as the EQ-4 – has 20,000 flying hours. Northrop estimates that means the airframe is somewhere between adolescence and middle age, but it cannot be sure. The company is working with the USAF now to develop a programme to formally analyse the aircraft's estimated service life.