The US Navy (USN) is preparing to place an order for Raytheon's Joint Precision Approach and Landing System (JPALS), to be manufactured and installed on all of its aircraft carriers and amphibious assault ships.

Naval Air Systems Command (NAVAIR) on 25 March approved production of the system, which is installed on all three variants of the Lockheed Martin F-35 Lightning II, and should sign a contract with the Raytheon at the beginning of May. This will launch serial production of the technology, says Raytheon and lead to JPALS being installed on 11 nuclear-powered aircraft carriers and eight amphibious assault ships, with the first units expected to be delivered some time in 2020.

JPALS is a differential, GPS-based precision landing system that guides aircraft to land on carrier or assault vessel decks. The navigation equipment is used by the F-35 and will be installed on the in-development Boeing MQ-25A Stingray unmanned in-flight refuelling vehicle, while other USN aircraft will continue to use the service's existing tactical air navigation system. 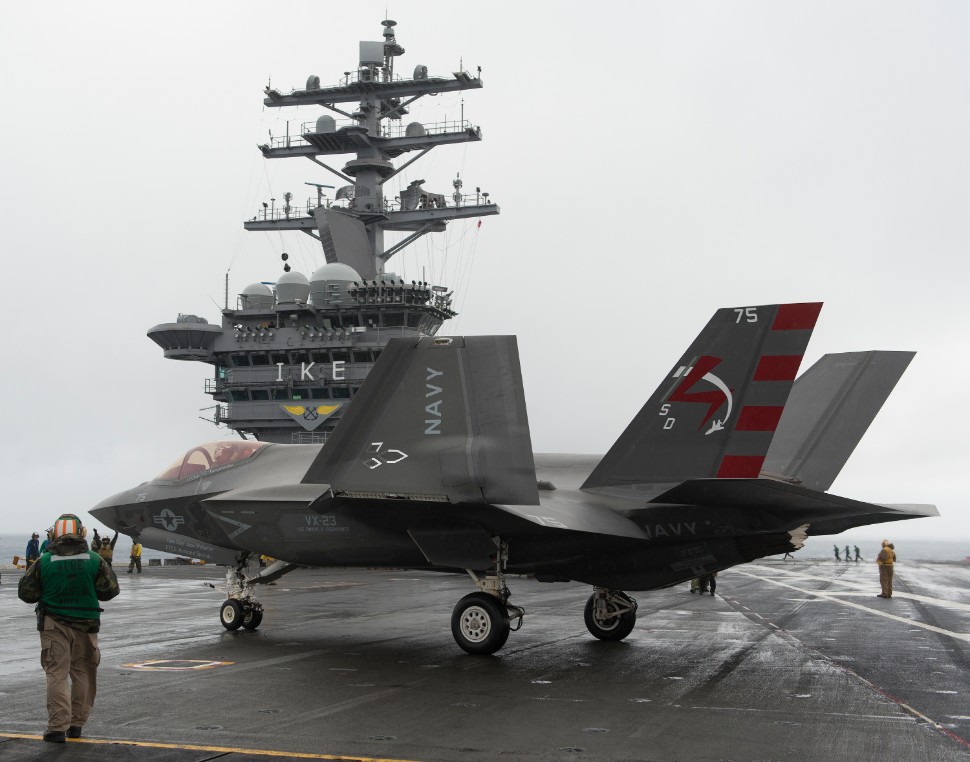 "In layman’s terms, it provides a kind of a tunnel [on the heads-up display] for the airplane to fly through to get at the same landing point every time safely," says Brooks Cleveland, Raytheon's senior aviation adviser for precision landing systems.

Raytheon promises that the system is 99% reliable, guiding an aircraft to a 20x20cm (8x8in) spot on a carrier's deck in almost all weather and up to Sea State 5, an ocean surface condition where rough waves are cresting as high as 2.5m (8ft). JPALs uses an encrypted, anti-jam data link to connect to software and receiver hardware built into F-35 fighters and MQ-25A tankers, as well as an array of GPS sensors, mast-mounted antennas and shipboard equipment.

Pilots returning to a carrier for a landing will first engage with JPALS at about 200nm (370km) away, where they start receiving range and bearing information, then at 60nm the jet automatically logs into the JPALS queue, receiving more precise data while beginning two-way data-link communication. At 10nm the pilot starts receiving precision data for landing, following visual cues to land on an exact spot.

Using JPALS is more covert than relying on a legacy tactical air navigation system and radio transmissions between a pilot and air traffic control, says CJ Jaynes, Raytheon executive technical adviser for JPALS. "You do not have to have an air traffic control tower. You don't have to have anyone talking to you," she says. "A system can be on the ground and a pilot can go all the way to his landing point without any communication whatsoever."

Because the system relies on a direct encrypted data link the likelihood of interception – a risk with a broadcast, which could give away the position of the aircraft or ship – is also lower, says Cleveland.

In July 2018, the USS Wasp amphibious assault ship used JPALS for the first time to guide a US Marine Corps (USMC) F-35B onto its deck. The USS Essex has also been using the system. Both assault ships carry engineering, manufacturing and development (EMD) units which will later be replaced with production examples.

Raytheon thinks the system has potential for other USN carrier-based aircraft too, including the Boeing F/A-18E/F Super Hornet, Bell Boeing V-22 Osprey and Northrop Grumman E-2 Hawkeye. The landing system can be added to any aircraft with a GPS, an inertial navigation system, a software reprogrammable radio and enough computing power, says Jaynes.

In January 2019, Raytheon demonstrated a portable version of JPALS guiding in a USMC F-35B vertical take-off and landing variant for a touchdown at Yuma Proving Ground in Arizona. In attendance were personnel from the USN, USMC and US Air Force (USAF), says the company.

Those services are interested in JPALS as a way to rapidly set up and facilitate air traffic control operations at expeditionary bases, which are part of a Pentagon idea to make the position of air forces unpredictable – a strategy to keep near-peer adversaries such as China or Russia on their heels should war break out. In particular, the USAF is showing strong interest, says Jaynes.

"The reason the air force is interested is they are developing a concept of operations called 'agile basing' where they intend to bring in their air wing, maybe stay in a location for 24 to 48h and then move the entire air wing to a new location," she says.

The USMC is also interested because it could play a role in the Pacific theatre, says Cleveland. "This system is perfect for that island hopping," he says.

The expeditionary version could be packed in ruggedised cases or integrated into a Humvee or Polaris RZR light tactical all-terrain vehicle, either of which could be quickly air dropped.

"Right now the goal is to have [a] multi-runway, multi-aircraft [capability], with the ultimate goal we envision an end space where you can handle up to 50 aircraft with that landing system," says Jaynes. "And you could land up to 50 planes or touch down [at] points within 20nm of that ground station.”

For a second demonstration of the expeditionary version of JPALS at NAS Patuxent River in Maryland on 8 May and 9 May, Raytheon invited back all of the US military services, plus international development partners on the Joint Strike Fighter programme. "Any country that's buying an F-35 – whether it's an A, B or C model – is a potential customer for this," says Jaynes.

JPALS, the Raytheon-developed Joint Precision Approach and Landing System being readied for installation on all the US Navy’s aircraft carriers and amphibious assault ships, brings the latest GPS technology to bear on the oldest problem in naval aviation: landing safely on the moving runway that is the deck of a “flat top”.

But the system, which should be delivered from 2020, is not the first of its type – the navy has been using a predecessor system to address this problem since the 1980s. 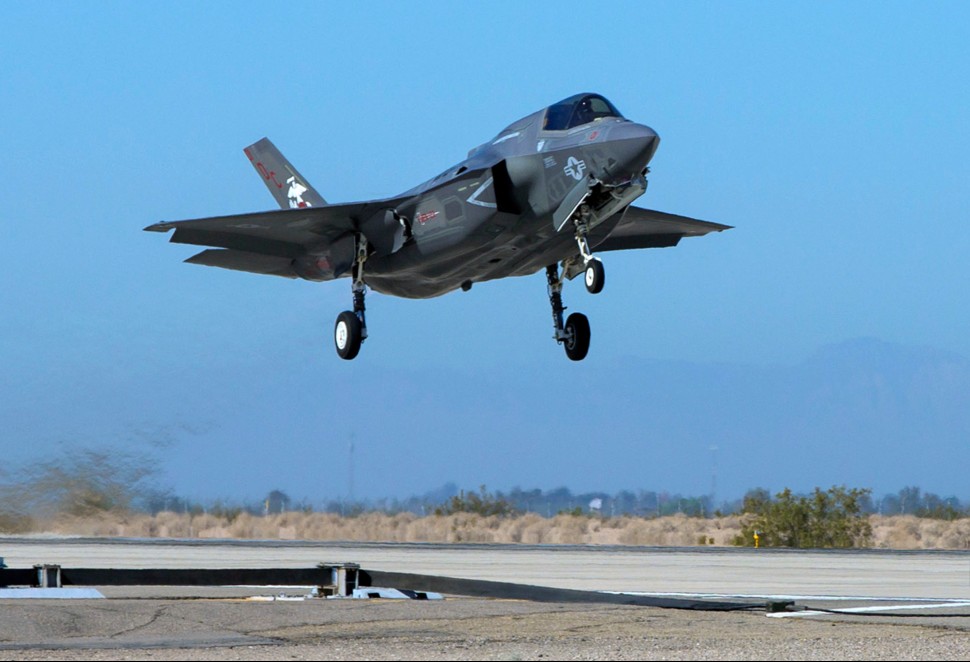 This current PALS “electronic landing aid” is radar-based, and has been installed on every USN carrier starting with the USS John F. Kennedy, where it was certified for service in 1988 following trials. Developed by Textron Systems, PALS operates in one of three modes: fully automatic, pilot manual control based on cockpit displays of glide slope and centreline error, and pilot control based on approach controller talk-down.

Two systems – one aircraft-based and one shipboard – operate independently, and must provide identical data to the incoming pilot. In a 2003 University of Tennessee master’s thesis assessing techniques for certifying that these independent elements are indeed providing identical information, John Ellis describes the system as “a vital component of modern naval aircraft recovery”. Ellis notes that in the John F. Kennedy trials “the benefits the system provided to naval aviation were immediately recognised”.

Production systems were certified for use from 1963, but early examples apparently suffered from reliability problems as they consisted of “more than 30 units of electronic equipment, consisting of hundreds of vacuum tube operational amplifiers”.

Subsequent digitalisation – and now the advent of GPS – have been welcome improvements.